US police arrest nearly 1,000 demonstrators in Washington in one week 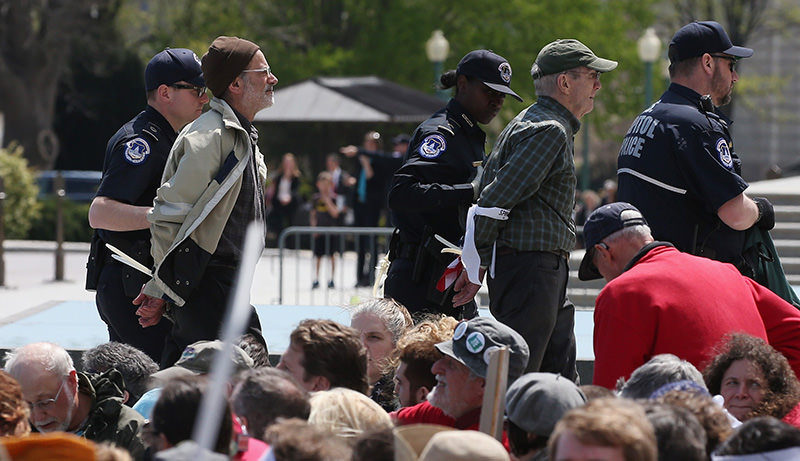 Conservative and independent protesters channeling themes from the presidential campaigns of Donald Trump and Bernie Sanders dumped faux contributions into Boston Harbor on Friday, one of some 30 nationwide demonstrations planned against big money in politics.

In Washington, police arrested 142 members of a more liberal group called Democracy Spring including 12 who cuffed themselves inside the Capitol Rotunda to protest the influence of special interests and to denounce laws making it more difficult to vote.

Nearly 1,000 Democracy Spring demonstrators have been arrested in Washington this week.

Both the week-long protests in Washington and Friday's nationwide demonstrations led by the activist group Represent.Us have tapped into some of the voter frustration seen on the presidential campaign trail.

The group, which has promoted anti-corruption resolutions in American cities, says it neither endorses nor opposes any presidential candidate. Represent.Us said it would stage events in 33 cities.

Trump, a billionaire Republican, and Sanders, who describes himself as a democratic socialist running for the Democratic nomination, have both criticized the influence of large campaign contributions in their surprising runs for the White House.

"It doesn't matter if you're conservative or progressive. Two hundred and forty-three years after the original Boston Tea Party, Americans of all political stripes are still facing taxation without political representation," said Dan Krassner, political director of Represent.Us.

About 40 activists attended the symbolic re-staging of the
Boston Tea Party near the spot where American colonists dumped
tea into the harbor to protest taxes levied by the British.
Represent.Us activists tossed a stack of wooden crates into the
water, representing campaign contributions.

In Washington on Friday, Democracy Spring activists cuffed
themselves to scaffolding in the Capitol Rotunda.

"We the people demand a democracy free from the corruption
influence of big money and voter suppression," the protesters
said in unison.

Another 130 were arrested for unlawful demonstrations,
Capitol Police said. A few hundred chanting demonstrators
marched up Capitol Hill with signs saying "Sweep Big Money out
of Politics" and "Corporations are not people." They also
protested the high cost of college loans, economic inequality
and fracking.

"We need to get money out of politics and overturn Citizens
United (a Supreme Court decision on campaign contributions),"
said David Cheplowitz, 27, of Rochester, New York.