US releases 9 Yemeni Guantanamo prisoners, sends them to Saudi Arabia 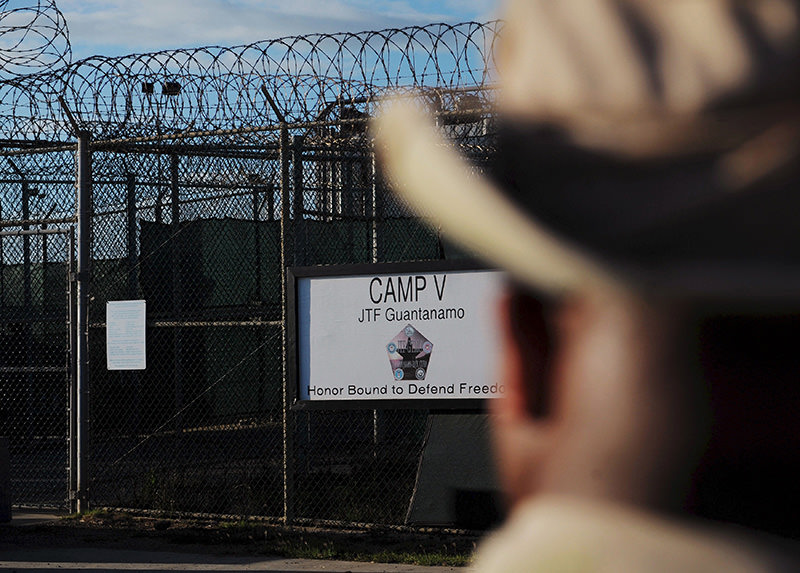 by Daily Sabah with AP Apr 16, 2016 12:00 am
The U.S. has released nine more prisoners from its base at Guantanamo Bay, Cuba, and sent them to Saudi Arabia for resettlement, officials said Saturday.

The move announced in a Pentagon statement is part of an effort by President Barack Obama's administration to release detainees considered low-risk while seeking to transfer the remainder to the U.S.

"The United States is grateful to the government of the Kingdom of Saudi Arabia for its humanitarian gesture and willingness to support ongoing U.S. efforts to close the Guantanamo Bay detention facility," the Pentagon said.

With this latest release, there are now 80 prisoners at Guantanamo, including 26 cleared men expected to be sent home or to another country by the end of the summer.

Many in Congress, however, are staunchly opposed to closing Guantanamo or moving any prisoners to the U.S. and some have called for new restrictions on future releases and transfers.

Amnesty International has criticized the U.S. for holding detainees in a place where "neither U.S. nor international law applies." Human Rights Watch (HRW) says many of the detainees at Guantanamo have been held there for almost 14 years, and there has been no charge or trial, in violation of international law. "The administration should either prosecute detainees in courts that comport with fair trial standards, or transfer them to safe home or third countries," HRW said in a report published in February.

All of the men whose release was announced Saturday are Yemeni but could not be sent back to their homeland because U.S. officials fear that the instability there would enable them to resume the militant activities that landed them at Guantanamo in the first place. They are expected to take part in a Saudi rehabilitation program for an undisclosed length of time.

In a report published by Amnesty USA, detainees were said to have been subjected to a wide range of interrogation tactics which includes "stress positions, sensory deprivation, prolonged isolation, forcible shaving and using individual phobias" that constitute ill-treatment. The same report also said that indefinite and arbitrary detentions have caused numerous suicide attempts, and have diminished American reputation abroad.

The nine Yemenis include Tariq Ba Odah, a frequent hunger striker whose weight dropped to a dangerously low 74 pounds (34 kilograms) at one point as the military fed him with liquid nutrients to prevent him from starving to death. His lawyers at the Center for Constitutional Rights had urged the U.S. to free him earlier due to his health.

Eight of the prisoners, including Ba Odah, had been cleared for released from Guantanamo since at least January 2009, when an Obama administration task force evaluated all of the prisoners held at that time. The ninth, Mashur Abdullah Muqbil Ahmed Al-Sabri, was cleared by a review board last year.