Tensions high in Brazil as lawmakers vote on Rousseff impeachment 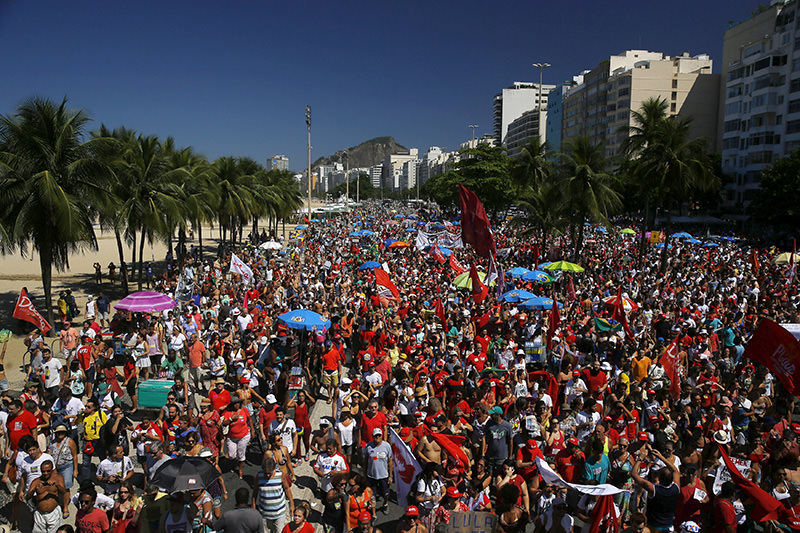 Friends and foes of Brazilian President Dilma Rousseff called each other "putchists" and "thieves" ahead of Sunday's vote in Congress' lower house on whether to proceed with her impeachment, as unprecedented levels of vitriol sparked fears of violence.

Emotions have been running high since the impeachment proceedings began in the Chamber of Deputies on Friday, with lawmakers holding raucous, name-calling session. Outside the legislature, waves of pro- and anti-impeachment demonstrators were expected to flood the capital of Brasilia on Sunday. A metal wall was installed to keep the rival sides safely apart.

If 342 of the lower house's 513 lawmakers vote in favor of the impeachment on Sunday, the proceedings move to the Senate, where a separate vote could suspend Rousseff and hand over the top job to Vice President Michel Temer, who Rousseff has blasted in recent days as being part of the push against her.

If lawmakers vote against impeachment, this bid to oust Rousseff would be dead and any subsequent process would have to start over.

Newspapers have been updating their tallies on an almost hourly basis. With the result appearing to hang on the votes of a couple dozen undecided lawmakers, it was too close to call.

Brazil's president is facing impeachment over allegations she broke fiscal laws. Her detractors describe the sleight-of hand accounting as a bid to boost her government's floundering popularity amid a tanking economy and a corruption scandal so widespread it has taken down top public figures from across the political spectrum, as well as some of the country's richest businessmen.

Rousseff denies wrongdoing, pointing out that prior presidents have used similar accounting techniques. The allegations, she insists, are part of a "coup" spearheaded by Brazil's traditional ruling elite to snatch power back from her left-leaning Workers' Party, which has governed the nation for the past 13 years.

The key vote comes as Latin America's largest nation is dealing with problems on many fronts. The economy is contracting, inflation is around 10 percent and an outbreak of the Zika virus, which can cause devastating birth defects, has ravaged parts of northeastern states. Rio de Janeiro is gearing up to host the Olympics in August, but sharp budget cuts have fueled worries about whether the country will be ready to host.

As Rousseff's impeachment has gone from a remote to a concrete possibility, worry about her potential replacements has grown. There has also been increasing anger over the irony that many of the people pushing to oust her face serious allegations of corruption themselves.

Temer, a 75-year-old with the Brazilian Democratic Movement — a party bereft of any concrete ideology that has a reputation for backroom wheeling and dealing — has tried to cast himself as a statesman above the fray and a unifying force that can heal a scarred nation.

However, he has been linked to the massive corruption scheme centered at the state-run Petrobras oil company. Also, because he signed off on some of the questioned accounting maneuvers, Temer could later potentially face impeachment proceedings.

The second in line to replace Rousseff is Chamber of Deputies Speaker Eduardo Cunha, the driving force behind the impeachment and a long-time Rousseff enemy. He's facing money laundering and other charges for allegedly accepting some $5 million in kickbacks in connection with the Petrobras scheme and could also be stripped of office over allegations he lied when he told a congressional committee he didn't hold any foreign bank accounts. Documents later emerged linking him and his family to Swiss bank accounts.

The third in line, Senate head Renan Calheiros, is also facing multiple corruption allegations in the Petrobras probe. More than half the 65 members of the committee in the lower house that endorsed the impeachment are also facing corruption and other charges, as are some 60 percent of the country 594 members of Congress.

Under the special legal status afforded to Brazilian legislators and other top politicians, they must be tried by the Supreme Court, largely shielding them from prosecutions.

The argument appears to have struck a chord, even with the ardent impeachment supporters.

"I would feel much more comfortable if someone clean — with no charges, no allegations — were leading this process, but that's hard to find in the Brazilian Congress," said Douglas Sandri, a 25-year-old electrical engineer who traveled from the southern city of Porto Alegre to take part in pro-impeachment demonstrations. "If Temer is found to be corrupt, he will have to go, and all the others too."

But while much of the public appears to share Sandri's toss-them-all-out attitude, the corruption allegations casting a pall on Rousseff's potential substitutes don't appear to bother impeachment's backers inside the Chamber of Deputies.

"The presumption of innocence is a fundamental clause of our Constitution. Being charged or being the defendant in a case doesn't make a person dishonest," said Hiran Goncalves, a representative from the Amazonian state of Roraima who has come out in favor of impeachment.

Deputies planning to vote against impeachment have highlighted the alleged corruption of their colleagues, particularly Cunha, during the debate over the weekend.

Rousseff is "an honest woman and Cunha is corrupt," said Moema Gramacho, a representative from Salvador who wore a sash with the words, "Out with Cunha!"