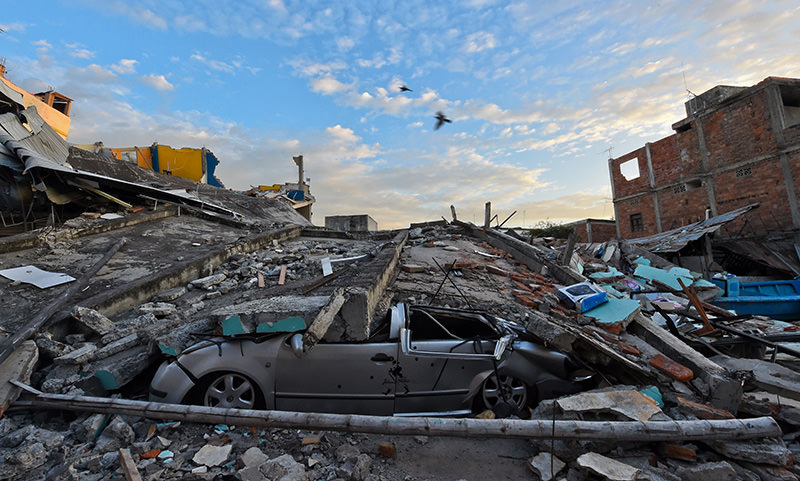 Rescuers in Ecuador clawed through collapsed buildings Monday as they scrambled to find survivors of a powerful earthquake that killed 350 people, injured thousands, and caused widespread coastal destruction. Ecuador's security minister said Monday that earthquake death count has risen to 350.

The quake, the most powerful to strike Ecuador in decades, shattered hotels and homes along its Pacific coast popular with tourists and reduced several towns to rubble.

More than 2,000 people were injured as structures tumbled during the quake or its dozens of aftershocks.

Ecuador's Foreign Minister Guillaume Long said via Twitter that experienced rescuers were arriving from Switzerland, Spain, and other Latin American countries including Mexico and Peru.

In Portoviejo, a city 15 kilometers (10 miles) from the coast, the temblor knocked down walls in a prison, allowing 100 inmates to escape.

Some were recaptured or returned later, but police were hunting for the others, Justice Minister Ledy Zuniga tweeted.

Elsewhere in hard-hit Portoviejo, the stench of decaying bodies began to fill the tropical air as rescuers raced to find survivors.

"We have already recovered three dead and we believe there are 10 to 11 people still trapped," said one worker digging through the debris of what used to be a six-story hotel called El Gato.

Officials have declared a state of emergency in the worst-hit provinces, and a national state of "exception," both of which suspend certain civil rights and liberties to allow security forces and officials to react faster.

President Correa visited the disaster zone on Sunday after cutting short an official trip to the Vatican.

He said the latest toll of 272 dead "will certainly rise and probably in a considerable way" in the hours ahead.

"There are still lots of bodies in the rubble," he warned. "These are extremely difficult times, the biggest tragedy in the last 67 years."

Correa made reference to the August 1949 earthquake near the central Ecuadoran city of Ambato that killed some 5,000 people and caused widespread destruction.

Among the worst-hit towns in the late Saturday quake was Pedernales, where Mayor Gabriel Alcivar estimated there were up to 400 more dead yet to be confirmed, many buried under the rubble of collapsed hotels.

Soldiers patrolled the beach town, and the Red Cross and the army opened a field hospital and a makeshift morgue at the local stadium.

"Here in Pedernales survivors have been rescued among the rubble and we are not losing hope that more will be found," Ecuador's Vice President Jorge Glas, who visited the town, told AFP.

In Calderon, near Portoviejo, 73-year-old resident Nelly, who would not give her last name, told AFP in tears that she rushed into the street after the earthquake and saw that the covered market had collapsed.

"There was a person trapped who screamed for help, but then the screaming stopped. Oh, it was terrible," she said.

Foreigners killed by the quake include two Canadians and five Colombians, officials said.

Ecuador's Geophysical Office reported "considerable" structural damage as far away as Guayaquil, Ecuador's biggest city with more than two million people, which is 350 kilometers (220 miles) away.

Although Ecuador frequently suffers seismic shudders because of its position on the Pacific rim's Ring of Fire, the weekend's quake -- which lasted a full minute -- was the worst in nearly 40 years.

Ecuador has been rocked by seven earthquakes of magnitude 7.0 or higher in the region of Saturday's quake since 1900, the US Geological Survey said. One in March 1987 killed about 1,000 people.

David Rothery, a professor of geosciences at Britain's Open University, said the 7.8 magnitude meant that "the total energy involved was probably about 20 times greater" than the magnitude 7.0 earthquake that killed at least 41 people in southern Japan on Saturday.

He said there is no link between the two quakes.

International concern and sympathy -- and offers to assist -- have flowed in.

US Secretary of State John Kerry and European Union chief diplomat Federica Mogherini expressed condolences and said they were ready to help.