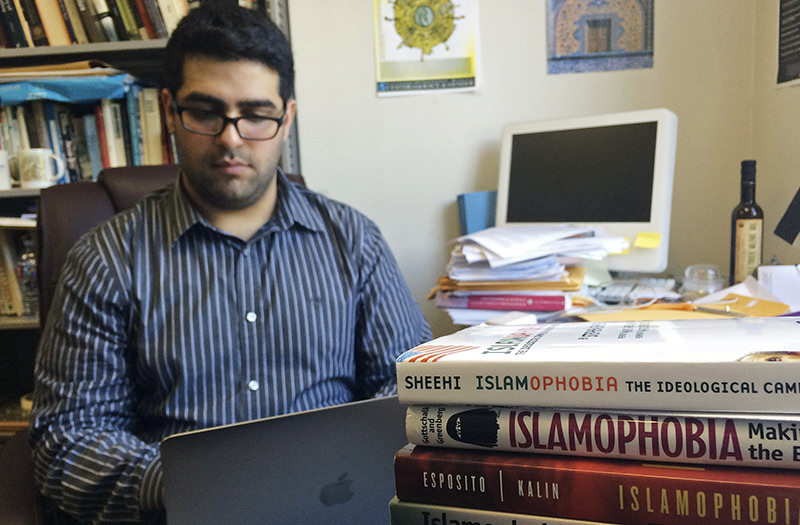 Khairuldeen Makhzoomi works in his office in Berkeley, Calif., Monday, April 18, 2016 (AP Photo)
by Associated Press Apr 19, 2016 12:00 am
A college student and Iraqi refugee yanked from a Southwest Airlines flight after speaking Arabic during a phone conversation in Arabic says he was degraded and humiliated and wants a public apology.

Khairuldeen Makhzoomi, who arrived in the U.S. in 2010 as an Iraqi refugee, was removed from the April 9 flight from Los Angeles to Oakland, California, after the airline said another Arabic-speaking passenger reported hearing him say something that alarmed her. The airline said in a statement that it regretted what occurred, but under federal regulations it had no alternative but to remove Makhzoomi.

"To be honest with you, I really was intimidated," Makhzoomi told The Associated Press on Monday. "It was an overwhelming process. They made me feel as if I were guilty."

He was released after being interrogated by Los Angeles International Airport police and FBI agents.

A spokesman for Los Angeles International Airport police says officers have concluded a University of California, Berkeley student broke no laws when he spoke in Arabic on his cellphone while seated on a Southwest Airlines plane.

Officer Rob Pedregon of the Los Angeles World Airports Police Department said Monday that officers from his department and agents from the FBI both interviewed Khairuldeen Makhzoomi after he was taken off the April 9 flight.

Makhzoomi says he made a passing reference to Daesh while telling his uncle about a speech he had attended by United Nations Secretary General Ban Ki-moon.

"The statement he made was not illegal, there was nothing that involved threats or anything like that so he was released," Pedregon said.