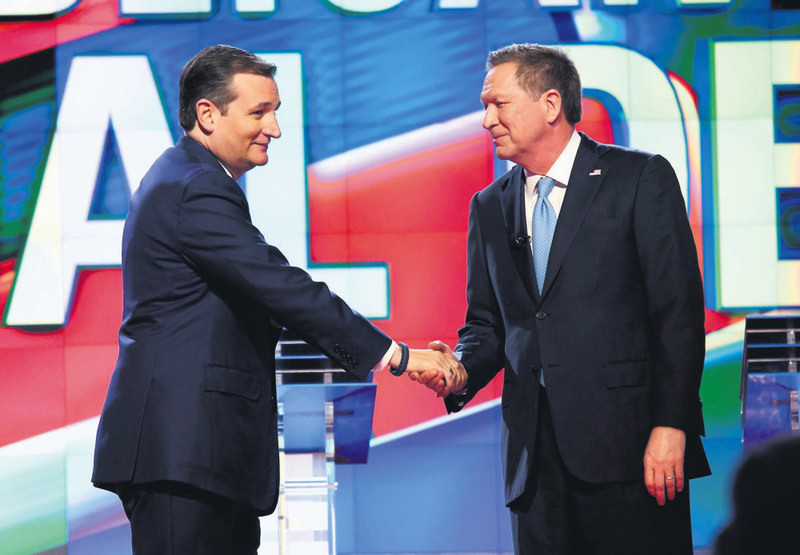 The sudden alliance, revealed in short statements, arose due to the pressing timing of the Republican Party's presidential primary season. Five states vote Tuesday in the Republican race – Connecticut, Delaware, Maryland, Pennsylvania and Rhode Island – and Trump leads in all of them.

Trump, a wealthy property developer and reality television star, has pushed quite close to amassing the number of delegates to the party convention in Cleveland in July that would ensure his status as the Republican standard-bearer. But he is not there yet, and Cruz and Kasich know their only chance to stop him is a contested convention.

A candidate must secure 1,237 delegates to win the Republican nomination outright. Trump leads substantially in the delegate battle, with 846 delegates compared to 563 for Cruz and 147 for Kasich. If Trump is to be denied, uncommitted delegates will have to go to Cruz. "Having Donald Trump at the top of the ticket in November would be a sure disaster for Republicans. Not only would Trump get blown out by [Hillary] Clinton or [Bernie] Sanders, but having him as our nominee would set the party back a generation," Cruz's campaign manager Jeff Roe said in a statement. "To ensure that we nominate a Republican who can unify the Republican Party and win in November, our campaign will focus its time and resources in Indiana and in turn clear the path for Governor Kasich to compete in Oregon and New Mexico." Kasich's team put out a similar statement.

A dismissive Trump said on Twitter: "Wow, just announced that Lyin' Ted and Kasich are going to collude in order to keep me from getting the Republican nomination. DESPERATION!" Some influential party figures such as 2012 nominee Mitt Romney have aligned with a Stop Trump movement, which may or may not be benefiting Trump's chief rival Cruz, an arch-conservative U.S. senator from Texas.

Barely 36 hours before the voters in five states head to the polls, Trump lashed out at Cruz, accusing him of "bribing" all-important delegates as part of the convoluted primary system for choosing the Democratic and Republican nominees.

Earlier, Trump and his presidential campaign pushed back Sunday against accusations by rivals in both parties that the celebrity billionaire is a political fraud who has been misleading voters. The Republican frontrunner's new senior advisor Paul Manafort raised eyebrows when he told Republican heavyweights at a closed-door meeting that Trump has been playing a "part" in front of rally audiences and that the role was "evolving" into a more serious and policy-focused one.

Trump's incendiary campaign – he has called some Mexicans "rapists," vowed to build a wall on the southern U.S. border and wants to bar Muslims from entering the country – has infuriated the Republican establishment.

Trump said Cruz was busy focusing on the behind-the-scenes wooing of delegates in the event there is no outright winner heading into the convention. "They had boats and yachts waiting to take delegates around," Trump said at a rowdy rally in Hagerstown, Maryland, speaking of the Republican National Committee's spring meeting this past week with delegates gathered at a Florida resort. "We want to put it [the nomination] away," Trump said. "I only care about the first ballot. We're not going for the second and third and fourth and fifth."