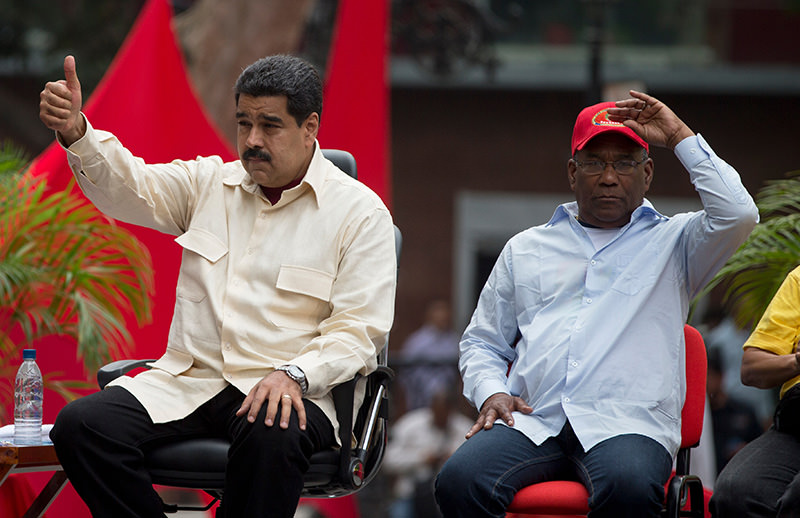 Venezuela's president is ordering a 30 percent increase in the minimum wage on May 1 International Labor Day, the latest move by the socialist government to grapple with high inflation and economic stagnation.

Venezuelans also lost half an hour of sleep Sunday as their clocks were set forward to save power on President Nicolas Maduro's order.

At 2:30 am local time, the oil-dependent South American nation shifted its time ahead by 30 minutes -- to four hours behind Greenwich Mean Time.

Officials issued a statement saying the return to the old time zone would not affect bank transactions or flights.

The new increase is effective Sunday, which is International Labor Day, and will push the minimum wage to 15,051 bolivars a month. That is about $1,500 at the official exchange rate, but is around $50 at the current black market rate, which largely sets prices of goods for Venezuelans. Maduro also increased a monthly food ticket to 18,585 bolivars - around $17 at the black market rate.

The decree, which come into effect on Sunday, includes pay raises for public workers, pensioners and members of the military.

The moves, announced in mid-April, are part of a package of measures the embattled socialist president is pursuing to cope with a crippling electricity shortage.

Maduro's government has also instituted four-hour daily blackouts across most of the country, reduced the public-sector workweek to two days and ordered schools closed on Fridays -- adding to the woes of a country already stuck in a crushing recession.

Maduro blames the El Nino weather phenomenon for a drought that has reduced the lakes at Venezuela's hydroelectric dams to oversized puddles.

The dry spell, the most severe in 40 years, has especially affected the El Guri dam, which provides 70 percent of Venezuela's electricity.

But the opposition says mismanagement is to blame for the power crisis as well as the recession and shortages.

In his late Saturday presentation Maduro also called on his followers to join May Day rallies in Caracas.

Once-booming Venezuela, which has the world's largest proven oil reserves, has plunged into economic chaos as global crude prices have collapsed. Its economy has been in recession since 2013.

The leftist Maduro government blames the situation on an "economic war" waged against the country by capitalists, and has vowed to press on with the socialist "revolution" launched by his late predecessor Hugo Chavez in 1999.

Maduro's emboldened political opposition however has been pushing to drive him from office since it took control of the legislature in January.

The president celebrated that the rise would be the twelfth since he was elected president in April 2013 after the death of his predecessor and mentor Hugo Chavez. "Only a president like Nicolas Maduro, son of Hugo Chavez (could achieve this)," said the president in an hours-long address on state television.

Critics counter that the repeated wage hikes reveal the government's utter failure to stem inflation and a deep recession.

"This man's 'increases' are a joke. Inflation is rocketing!" said opposition leader Henrique Capriles on Twitter, adding that inflation in the month of March was at 20 percent.