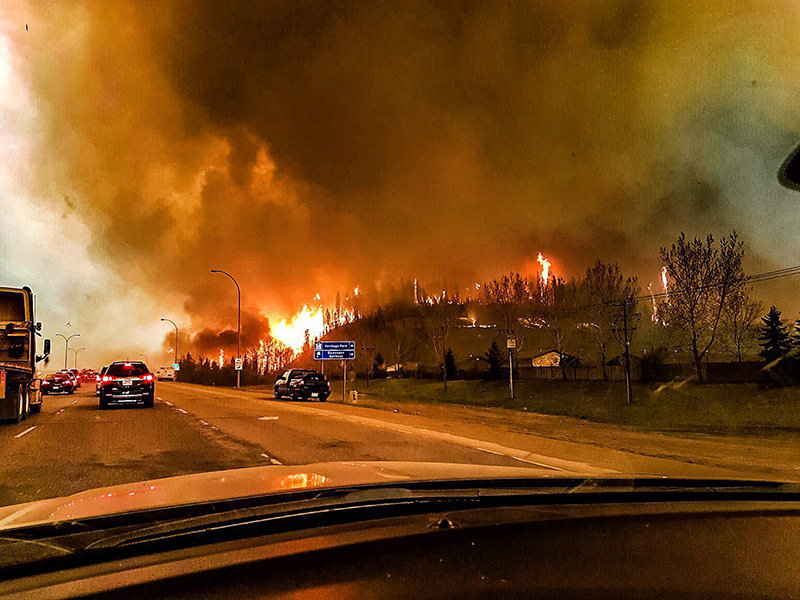 A massive wildfire near Fort McMurray in Alberta, Canada, that has grown to five times its initial size has spread south, forcing more evacuations on Thursday after 88,000 people fled the city in the nation's energy heartland.

The uncontrolled blaze, which has consumed swaths of the city, has shut some oil production in the area, driving up global oil prices and affecting projects and pipelines across the heavily forested region.

At least 640,000 barrels per day of crude output is offline, according to Reuters calculations, roughly 16 percent of Canada's crude production. The outage is expected to climb as major players in the region cut production. [O/R]

Conoco Phillips is evacuating its small 30,000-barrel-per-day Surmont project, south of Fort McMurray, as a precaution because of potential highway closures. The fire is currently 38 kilometers north of Surmont, a spokeswoman said.

Most of Alberta's oil sands facilities are north of Fort McMurray.

"What people in that region have gone through in the last couple of days is literally hell on earth," Rona Ambrose, a Canadian opposition leader who is from the province, told Parliament, fighting back tears.

Officials on the scene were forced to evacuate a make-shift emergency operations center for the second time in less than a day, and the spreading flames threatened community centers feeding and housing evacuees from Fort McMurray.

Evacuee Jason Blair said he only had enough time to grab a few belongings before driving north to a Canadian Natural Resources Ltd (CNRL) facility.

"For some reason I really wanted my son's first pair of shoes," he told CBC television.

CNRL said it has airlifted about 2,600 people over the last 24 hours to Edmonton and Calgary, including its own workers, to make room for more evacuees.

Fire has intermittently blocked the only route south toward major cities, so thousands of evacuees drove north toward oil sands facilities and a few small settlements but no route out.

Entire city evacuated as Alberta fire burns out of control

Frightened evacuees north of the city took to Twitter, asking when they would be able to drive south and whether areas to the north were safe.

"We're just sitting in a camp praying to get out!! Give us answers!!! Please," Twitter user @jennimac780 told the regional government.

No evacuation has been ordered for north of the city.

"We haven't forgotten about you and you're safe," said the government on Twitter.

The forecast has called for cooler temperatures and a possibility of rain, offering hope that controlling the blaze could become easier.

Authorities said there had been no known casualties from the blaze itself, but fatalities were reported in at least one vehicle crash along the evacuation route.

Thousands bunked down for the night on Wednesday in arenas, hockey rinks and oil work camps that were often short of fuel and food.

Fire also threatened the airport, and web cam images showed black smoke engulfing the area late Wednesday evening. Officials confirmed that a hotel north of the main terminal had caught fire, but as the sun rose on Thursday new images of the airport showed no obvious damage.

Firefighters have been unable to stop the wildfire, which has charred 18,500 acres (7,500 hectares) since it erupted on Sunday and exploded in ferocity.

Hot, dry, windy weather has made the massive wildfire all but impossible to control. The entire city of Fort McMurray was ordered to evacuate on Tuesday, and some 1,600 structures had been destroyed, Alberta Premier Rachel Notley said on Wednesday.

A government forecast map of potential fire intensity still showed some areas around Fort McMurray at class 6, the highest level.