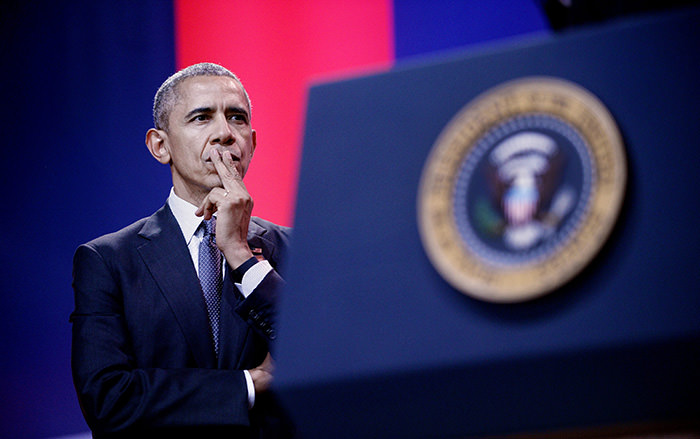 US President Barack Obama attends the kick off of the 5th anniversary of Joining Forces and the 75th anniversary of the USO at Joint Base Andrews in Maryland, USA, 05 May 2016 (EPA Photo)
by Anadolu Agency May 06, 2016 12:00 am

A recent lawsuit filed against President Barack Obama regarding his use of force against Daesh raises questions, the White House said on Thursday.

"These are legitimate questions for every American to be asking," spokesman Josh Earnest told reporters.

Capt. Nathan Michael Smith, an Army intelligence officer stationed in Kuwait, said in the lawsuit that Obama is not authorized to take up the campaign against Daesh under Bush-era authorizations, according to reports.

Filed in U.S. district court for the District of Columbia on Wednesday, the suit alleges that the action violates the 1973 War Powers Act in which a president is required to seek congressional authorization for military action 60 days after it begins, or terminate the campaign.

Obama previously sought authorization from lawmakers that would have explicitly authorized the use of force against Daesh, but lawmakers have been reluctant to take up his proposal.

Republicans worry that the authorizations the president seeks are not robust enough, while Democrats have cautioned that they are too expansive.

In the interim, Obama has argued that the 2001 authorization to fight al-Qaeda, as well as the 2002 authorization for the Iraq War, authorizes his operations against Daesh.

"This is yet another example of Congress dropping the ball when it comes to core American priority," Earnest said. "Unfortunately, we've not seen Congress take much action on this."

The issue has gained traction as the Obama administration authorized successive troop deployments to Iraq and Syria to help in the fight against Daesh, most recently sending an additional 250 troops to Syria to join the 50 that are already there.