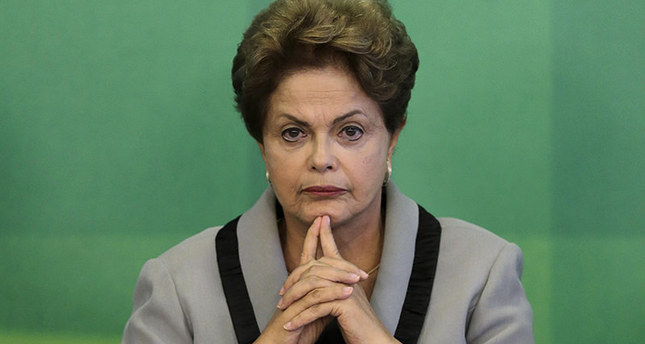 Brazil's battle over the impeachment of President Dilma Rousseff descended into outright confusion Monday when Congress's lower house leader demanded the process be stopped but the Senate vowed to go ahead.

Rousseff faces being suspended from office if the Senate votes -- as now appears likely -- to open an impeachment trial at a session starting Wednesday.

In a stunning twist of events, the interim lower house speaker, Waldir Maranhao, declared earlier that the original vote in April by lawmakers to get the impeachment process rolling had been flawed and should be repeated.

That would have pulled Rousseff's case from the Senate and put her back at square one with the lower house.

Maranhao said the original vote by lower house deputies had "prejudged" Rousseff and denied her "the right to a full defense."

The order sparked consternation in the capital, with Rousseff's allies seeing a possible escape route for the president and her opponents reacting furiously.

Rousseff huddled in an emergency meeting with ministers and all eyes turned to see how the Senate would react.

"I ignore" the order, Calheiros said in a nationally televised session, sparking raucous applause and angry shouting from rival senators on the Senate floor.

It was not immediately clear whether any more obstacles would be raised to prevent Wednesday's vote or whether the Supreme Court would intervene to resolve the congressional dispute.

The impeachment battle has taken so many unexpected twists that Brazilians refer to it as a real-life version of the Netflix political drama "House of Cards."

Rousseff, from the leftist Workers' Party, is accused of illegally manipulating government budget accounts during her 2014 re-election battle to mask the seriousness of economic problems. But she says the process has been twisted into a coup by right-wingers in the second year of her second term.

Her removal had been looking increasingly certain after the lower house voted in mid-April by an overwhelming majority to send her case to the Senate for trial -- the vote now declared void by Maranhao.

In the Senate, around 50 of the 81 senators have already said they planned to vote in favor of an impeachment trial, well over the simple majority needed to open the process.

The vote result is expected on Thursday, followed shortly after by Rousseff's departure from the presidential offices. Ministers have reportedly already been clearing their desks.

Once suspended, Rousseff would face a trial lasting months, with a two-thirds majority needed eventually to eject her from office.

The news of Maranhao's attempt to block the process came as Rousseff was giving a speech to supporters.

"I don't know the consequences. Please be cautious," she said, interrupting her speech, and calling on her backers to "defend democracy."

"I don't think it will reverse the process of President (Rousseff's) suspension but without doubt the use of this 'atomic bomb' will buy the president more time for her defense," Perfeito said.

The political crisis comes on top of the deepest recession in decades for Brazil, just three months before Rio de Janeiro hosts the Olympic Games from August 5 to 21 -- the first Olympics held in South America.

Brazil is also in the midst of a giant corruption scandal involving state oil company Petrobras in which numerous politicians have been implicated, including allies and enemies of Rousseff.

Rousseff has not been formally accused of corruption like many of her rivals. But prosecutors have called for her to be investigated for allegedly trying to obstruct a probe into the Petrobras affair.

If Rousseff is suspended, she would be replaced by her vice-president-turned-enemy, Michel Temer.

Temer, a center-right leader, has been alleged to have been involved in the Petrobras affair but he has not been formally investigated. A Sao Paulo court has fined him for campaign financing irregularities and he could face an eight-year ban from seeking elected office.