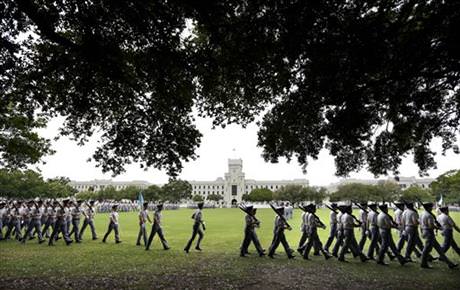 A spokesman for the family of a newly-accepted Muslim student at the Citadel military school in South Carolina says the prospective cadet is disappointed that the school has rejected her request to wear a head covering as part of her uniform.

Ibrahim Hooper with the Council on American-Islamic Relations in Washington said he spoke with the family Tuesday morning after Citadel officials called to tell the woman she could not wear a hijab. Citadel President John Rosa said the cadet system is based on a common uniform and standardization of cadets in appearance, actions and privileges, which he called essential to a military system.

Hooper said the woman will not attend the Charleston school this fall unless there is a change. He also said the family is considering legal options.

The Citadel said last month it was considering the woman's request to wear the head covering known as a hijab. But college president retired Lt. Gen John Rosa said in a statement Tuesday that after considerable review, the college has denied the request.

Citadel's statement said the college recognizes the importance of the spiritual and religious beliefs of cadets and makes accommodations for prayer and dietary needs.

He said he still hopes the student, whose name hasn't been released, will enroll.