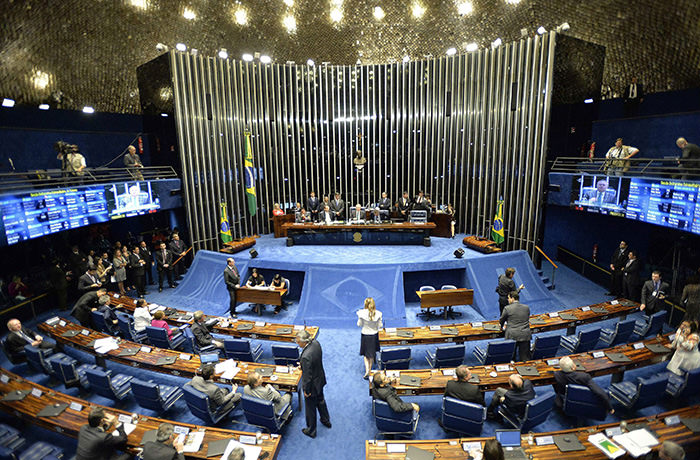 A general view of the Brazilian Senate as it begins a session that will decide whether Brazilian President Dilma Rousseff will be subject to impeachment that could end her mandate, in Brasilia, Brazil, 11 May 2016. (EPA Photo)
by Daily Sabah with Agencies May 12, 2016 12:00 am

Brazil's Senate voted on Thursday 55-22 in favor of impeaching the country's first woman president Dilma Rousseff after she was accused of hiding budget deficit.

Rousseff will be suspended and replaced for up to six months by Vice President Michel Temer pending a trial in the Senate. The trial will determine whether Rousseff can serve out her second term, or whether her ally-turned-enemy, Temer, will remain in the top job through the December 2018 end of the term.

The result represents a victory for the pro-impeachment camp. It was significantly higher than the simple majority of 41 votes needed to suspend her. It sends a signal that Rousseff faces an uphill battle to return to power.

Thursday's vote capped a marathon session in the Senate that lasted more than 20 hours.

Rousseff prepared for defeat by planning her exit from the presidential palace. Aides said she will dismiss her ministers on Thursday morning and tell them not to help a transition to a Temer government because she considers her impeachment illegal.

Rousseff, who has been in office since 2011, has seen her popularity crushed by Brazil's worst recession since the 1930s and a two-year probe into a vast kickback scheme at state-run oil company Petrobras.

The prospect of business-friendly Temer taking power has driven Brazilian financial markets sharply higher this year, on hopes he could cut a massive fiscal deficit, restore investor confidence and return the economy to growth.

The political crisis has deepened Brazil's recession and comes at a time when Brazil hoped to be shining on the world stage as it prepares to host the Olympic Games in Rio de Janeiro in August.

Opposition senators blamed Rousseff for running into the ground an economy now considered the worst performing among major developing nations, pursuing what they called populist policies that led to high inflation, recession and unemployment.

"Today we are trying to overcome this situation by removing an irresponsible government. We have no alternative," said Senator Blairo Maggi, one of Brazil's biggest soy farmers, who is slated to become agriculture minister in a Temer cabinet.

The Supreme Court rebuffed a last-ditch bid by Rousseff to halt the Senate vote with an injunction. Justice Teori Zavascki rejected as "legally implausible" the government's argument that impeachment was flawed because it was begun out of revenge by the former speaker of the lower house.

In a momentous session that many Brazilians followed live on television, each senator was given the chance to speak. A final vote could take place as late as 5:00 a.m. (0800 GMT) on Thursday.

Brasilia-based consultancy ARKO Advice projected that the upper chamber would vote 57-21 to try Rousseff, with three abstentions or absences.

That would indicate Rousseff's opponents may already have the two-thirds of the vote needed to convict her at the end of the trial and remove her definitively from office.

If that happened, Temer would then fulfil the remainder of her mandate until elections in 2018.

Rousseff, 68, was chairwoman of Petrobras when much of the graft occurred, but she has not been accused of corruption.

She stands charged with manipulating government accounts to disguise the size of Brazil's fiscal deficit to allow her to boost public spending during her 2014 re-election campaign, a practice also employed by previous presidents.

The president's plan to dismiss all her cabinet if and when the Senate suspends her will force Temer to hit the ground running, since he was counting on a gradual transition to a new cabinet.

Two Rousseff aides said, however, that the dismissal of her cabinet would exclude Central Bank Governor Alexandre Tombini, and the current sports minister, who is scrambling to prepare for the Rio 2016 Olympic Games in August.

'TIME FOR HER TO GO'

"I voted for Dilma, I believe in her as a leader, but I also think she has done such a bad job that it is time for her to go," said Leticia Britto, a 23-year-old business student from Sao Paulo, visiting Brasilia. "The best way forward would be to call for new elections."

"Temer may enjoy a honeymoon with markets for some weeks, maybe months, but when investors come to realise that the fiscal results will not improve fast enough, then we could see some disappointment later this year," said Bruno Lavieri, an economist with consultancy 4E, in Sao Paulo.

Rousseff has denied committing any crime that warrants impeachment charges. A former member of a Marxist guerrilla group who was tortured during Brazil's 1964-1985 military dictatorship, she has called her impeachment a coup and vowed to fight the process until the last minute.

"I will not resign, that never crossed my mind," Rousseff said in a speech on Tuesday, to cheers from supporters.

Rousseff's stance that democracy is under attack has won sympathy among some of Brazil's leftist neighbours. The U.S. government, meanwhile, said it hoped the country pulls through the crisis.

"Brazil is under some scrutiny and under some pressure," White House spokesman Josh Earnest said in Washington. "We continue to have confidence in the mature, durable democratic institutions in Brazil to withstand the challenge."

The last time a Brazilian president was suspended from office was in 1992, when Fernando Collor de Mello was placed on trial for corruption. He resigned from office shortly before he was found guilty by the Senate.
Last Update: May 12, 2016 2:08 pm
RELATED TOPICS