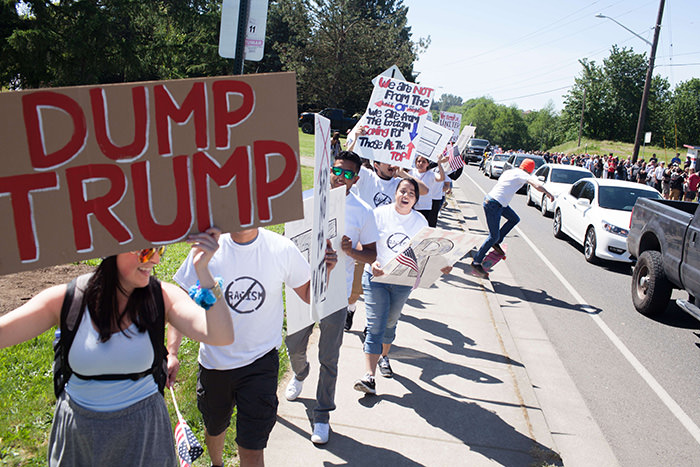 Protesters gather outside the venue prior to a Republican presidential candidate Donald Trump rally at the The Northwest Washington Fair and Event Center on May 7, 2016 in Lynden, Washington. (AFP Photo)
by Daily Sabah with Wires May 12, 2016 12:00 am

As the Republican presidential candidate almost confirmed his spot, concerned Americans seem to be looking for a new escape through a dating site that matches Americans running away from Trump with Canadians.

The dating website is pledging to match Americans who can't live with a Donald Trump presidency to Canadians looking for love, facilitating the pledge often made by U.S. voters to move to Canada if the real estate billionaire is elected.

"Maple Match makes it easy for Americans to find the ideal Canadian partner to save them from the unfathomable horror of a Trump presidency," the Maple Match website reads, before offering a waiting list for interested singles.

"I have always been fascinated by Canada," Goldman said. "So I thought to myself, 'Given the current political situation, this could bring Canadians and Americans closer together'," the 25-year-old Texan man named Joe Goldman was quoted saying by NBC News.

"The response has been tremendous," Goldman said and added: "I'm getting people from all over, but the strongest responses have been from Seattle and New York City. Our first inquiries came from Billings, Montana."

Trump has been a controversial hard-liner candidate, particularly when it comes to his views on migrants and Muslims. He called on to build a wall along the border with Mexico and ban all Muslims from entering the United States.