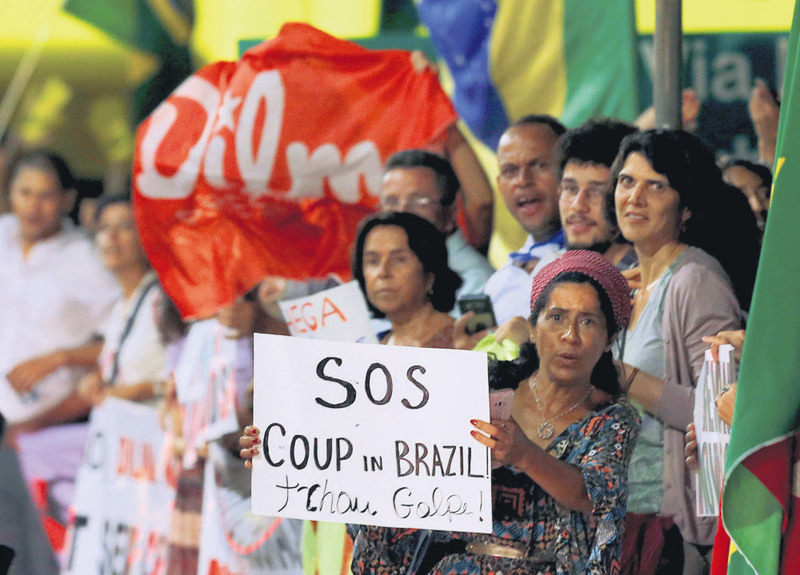 Supporters of Brazilian President Dilma Rousseff participate in a demonstration protesting her impeachment in Brasilia, Brazil, on May 10. (Reuters Photo)
by Daily Sabah with AP May 13, 2016 12:00 am

The Brazilian senate overwhelmingly voted in favor of suspending and impeaching President Dilma Rousseff, which she called a ‘coup.' Vice President Michel Temer immediately took over as interim president

The Brazilian senate voted yesterday to impeach President Dilma Rousseff after a months-long fight, hurling Latin America's largest country into political turmoil just months before it hosts the Summer Olympics. Rousseff called the vote in the senate to suspend her as president of Brazil a "historic injustice." "This is coup," she wrote on Facebook, in her first comments on the decision by the lawmakers.

Just hours after the senate voting, Rousseff's entire cabinet was dismissed. The G1 Internet portal of the Globo television network said the notice of the dismissal of the 27 ministers appeared in Thursday's edition of the government gazette. Those sacked include former President Luiz Inacio Lula da Silva, Rousseff's predecessor and mentor, whom she named as her chief of staff in March.

Rousseff's enraged backers called the move a coup d'etat and threatened wide-scale protests and strikes. Her foes, meanwhile, insisted that she had broken the law, and that the country's deep political, social and economic woes could only be tackled without her.

The 55-22 vote means that Rousseff's ally-turned-enemy, Vice President Michel Temer, will take over as acting president Thursday while she is suspended. The senate has 180 days to conduct a trial and decide whether Rousseff should be permanently removed from office. Rousseff, 68, was impeached for allegedly using illegal accounting tricks that critics said were meant to hide ballooning deficits and bolster an embattled government. Brazil's first female president, who was tortured under the country's dictatorship, has frequently blasted the impeachment push as modern-day coup, arguing she had not been charged with a crime and previous presidents did similar things.

She has also suggested that sexism in the male-dominated congress played a role in the impeachment. Rousseff's suspension and likely permanent removal ends 13 years of rule by the left-leaning Workers' Party.

Temer, a 75-year-old career politician, has promised to cut spending and privatize many sectors controlled by the state. For weeks, he has been quietly putting together a new Cabinet, angering Rousseff supporters. The lower house voted 367-137 last month in favor of impeachment.

The marathon debate in the senate began Wednesday morning and took 20 hours as dozens of lawmakers rose to give their opinions.

Humberto Costa, the Workers' Party leader in the senate, brandished a photo of Rousseff from her days as a young Marxist guerrilla during the country's 1964-1985 dictatorship at the military proceedings against her. Costa called Thursday's impeachment the second unjust trial Rousseff had endured, saying it was a bid by Brazil's traditional ruling classes to reassert their power and roll back Workers' Party policies in favor of the poor. "The Brazilian elite, the ruling class, which keeps treating this country as if it was their hereditary dominion, does not appreciate democracy," Costa said.

Polls have said a majority of Brazilians supported impeaching Rousseff. Temer has been implicated in the Petrobras corruption scheme as has Renan Calheiros, the senate head who is now number two in the line of succession. Former House Speaker Eduardo Cunha, who had been second in line, was suspended from office this month over allegations of obstruction of justice and corruption.

Rousseff has vehemently denied her administration's budget moves constituted a crime and argued that such maneuvers were used by prior presidents without repercussions. She has stressed that – unlike many of those who have pushed for impeachment – she does not face any allegations of personal corruption. While the trial is conducted, Rousseff will remain in Alvorada Palace, the presidential residence, Calheiros said. Rousseff will have security guards, health care, and the right to air and ground travel, as well as staff for her personal office and a salary, said Calheiros, who declined to say what it would be.

Temer, of the centrist Democratic Movement Party, insists he would expand the popular social programs, though he has also signaled that fiscal rigor is needed to dig Brazil out of its current financial hole.

The director of state-run Turkish Cooperation and Coordination Agency (TİKA) Colombia and South America, Associate Professor Mehmet Özkan, told Daily Sabah that Brazil had systemic political problems and the political system in the country faces serious crisis. On Rousseff's case, Özkan said Brazil's ruling elite tried to reshape the politics in the country. There is also a general trend toward the right-wing, which is another triggering factor for Rousseff's impeachment. "There is an effort to transform general politics in Brazil," Özkan said. Özkan stressed that there is a strong effort to redesign the political system on the continent and Rousseff's case sets a good example of it. He added that the lesson needed to be learned from Rousseff's case is that if a country challenges the current system, it needs to stand on its own two legs, which would lead the country to minimize its suffering from any global crises.
RELATED TOPICS