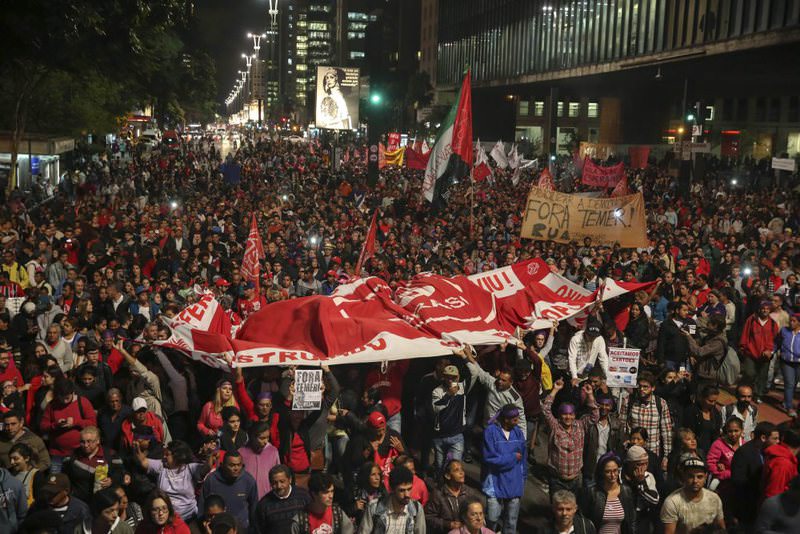 Supporters of Rousseff's government wave banners and flags during an event in Sao Paulo, Brazil on May 12. (EPA Photo)
by Compiled from Wire Services May 14, 2016 12:00 am

Brazilian President Rousseff vowed to fight what she described as a ‘coup' after her suspension. The head of the Union of South American Nations said Rousseff remains the ‘legitimate leader' of the Brazilian people

Brazilian President Dilma Rousseff, who was suspended by the Brazilian senate, has vowed to fight what she calls a coup while the new acting president is calling for unity in Brazil, underscoring the deep political polarization in Latin America's most populous nation.

The disparate visions came just hours apart in the same narrow hall in the presidential palace after the senate voted 55-22 on Thursday to impeach Rousseff, putting her vice president, Michel Temer, in charge.

Rousseff, whose popularity has plummeted amid the worst recession since the 1930s, is accused of using accounting tricks to hide large deficits in the federal budget. Opponents argue that damaged the country, but Brazil's first female president called it a baseless case cooked up so elites who loathe her leftist Workers' Party could snatch back power.

Temer moved quickly to announce a new Cabinet and said his government's first priority is to get Brazil's stalled economy going again. Emerging a few hours after the senate vote, Temer said it was a sober moment and made a bid for peace with Rousseff, offering his "institutional respect" for her and recognizing the impeachment campaign has caused deep divisions. "This is not a moment for celebrations, but one of profound reflection," he said during a swearing-in ceremony for his 22 Cabinet members. "It's urgent to pacify the nation and unify the country. It's urgent for us to form a government of national salvation to pull this country out of the serious crisis in which we find ourselves. Our biggest challenge is to staunch the process of freefall of our economy. First of all, we need to balance our public spending. The sooner we are able to balance our books, the sooner we'll be able to restart growth."

Rousseff warned that Temer plans to dismantle government social programs initiated by her party that benefit around one-fourth of the Brazilian population, but he insisted the programs would be maintained and "perfected" under his leadership. Rousseff was immediately suspended for 180 days pending a trial in the senate. If two-thirds of the 81 senators vote to find her guilty, Temer will serve out the remainder of her term, which ends in December 2018.

Rousseff said the action was a coup cooked up by power-hungry opponents. She has said the "chief conspirator" was Temer, the longtime leader of the centrist Democratic Movement Party that is known less for a specific ideological stance than for its skill at backroom deal making. In what many Brazilians think could prove to be her last speech as president, Rousseff said she would not give up. "I am the victim of a great injustice," said Rousseff, who rose to power in 2010 on the coattails of her wildly popular predecessor and mentor, Luiz Inacio Lula da Silva.

"I fought my whole life and I'm going to keep fighting," she said, signaling that she and her supporters may intend to make good on a promised campaign of protests and strikes that could complicate Temer's government.

Temer's new cabinet raised eyebrows because all its members are middle-aged or elderly white men – a particularly sore point in this majority non-white country. Six women, including one who is black, were included in the 39 members of Rousseff's cabinet when she began her second term last year.

Meanwhile, reaction to Rousseff's removal was swift and strong following the senate vote for impeachment. Ernesto Samper, the head of the Union of South American Nations (UNASUR) said Rousseff remains "the legitimate leader" of the Brazilian people and she maintains "democratic legitimacy" by virtue of having been reelected in 2014. During a press conference Thursday, Samper said he fears instability in Brazil may "move the region in a dangerous manner." He reiterated that there are no complaints on the conduct of Rousseff and added that the "administrative charges" appointed against her do not justify "an impeachment as it has started."

Rousseff is accused of violating fiscal rules to hide a budget deficit ahead of the 2014 presidential elections. She has dissolved her cabinet and Temer, who is under investigation for corruption, has assumed the position as the country's leader.
RELATED TOPICS