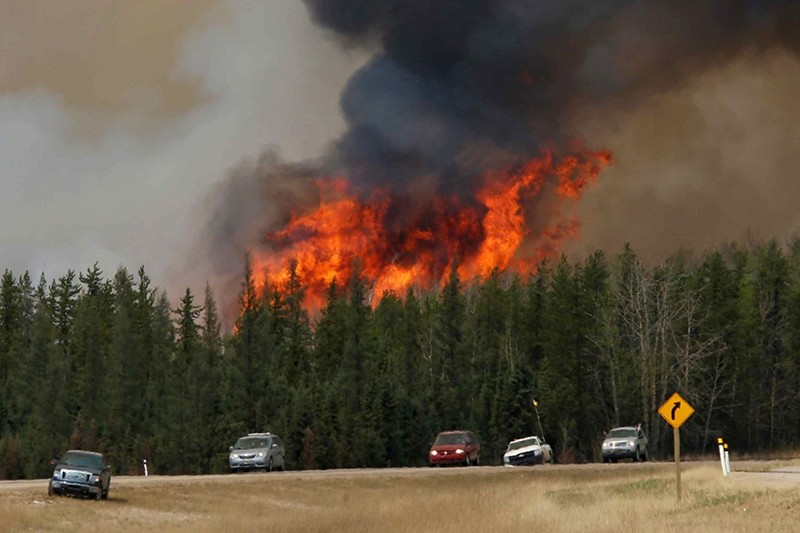 In total, about 8,000 people were forced to leave some 20 camps and facilities north of the city in Alberta province due to thick smoke and flareups.

The evacuation order was issued late Monday (0200 GMT Tuesday) for the area connected by a 50 kilometer (31 mile) stretch of highway between Fort McMurray and the town of Fort MacKay, in the heart of the oil sands.

"The evacuation zone has increased north of the city of Fort McMurray due to evolving fire conditions," the regional municipality of Wood Buffalo said.

"Several camps are affected by this evacuation. Approximately 8,000 people impacted," the statement read.

Some 100,000 residents and oil workers had already been evacuated from Fort McMurray and its surroundings two weeks ago.

Oil company workers had just started trickling back to an area to the north when the latest evacuation was ordered late Monday.

Canada's largest petroleum company, Suncor, was forced to shutter its oil operations almost immediately after getting them back up and running.

Suncor said it "is in the process of transporting personnel from the lodges on Aostra Road and near its base plant facility to other lodges further north."

And as a precautionary measure, "we have started a staged and orderly shutdown of our base plant operations. There has been no damage to Suncor's assets," the company added in a statement.

Another oil company, Syncrude, also operates in the area.

Forest fires that were beaten back last week were once again threatening oil facilities, while releasing a massive cloud of thick, black smoke stretching across the horizon.

The Royal Canadian Mounted Police responded by closing Highway 63 north of Fort McMurray -- the main route in and out of the oil patch.

In their latest bulletin, fire officials reported 19 active fires in Alberta, four more than announced on Monday. Some 2,000 firefighters are battling the blazes, including four that are out of control.

The largest fire near Fort McMurray has scorched nearly 2,900 square kilometers (1,120 square miles) of forests around the city, fueled by hot, dry weather and gusts of wind up to 40 kilometers (25 miles) per hour.

Firefighters have been battling around the clock to safeguard Fort McMurray and nearby oil facilities, and stall the fire's advance eastward toward neighboring Saskatchewan province. It was a mere 10 kilometers (six miles) away from the border as of Monday.

Workers in the Fort McMurray area may need gas masks due to the risk posed by the fumes from the fire, Notley said, adding that the air quality is three times worse than acceptable levels.

These conditions would delay repairs to city water and gas infrastructure and push back the return of residents, Notley said.

The worsening situation, after a glimmer of hope last week that the worst was over after one of the largest evacuations in Canadian history, is expected to have a significant economic impact too.

According to the Conference Board of Canada, oil production was reduced by 1.2 million barrels per day on average, depriving government coffers of an estimated $1 billion in oil royalties.