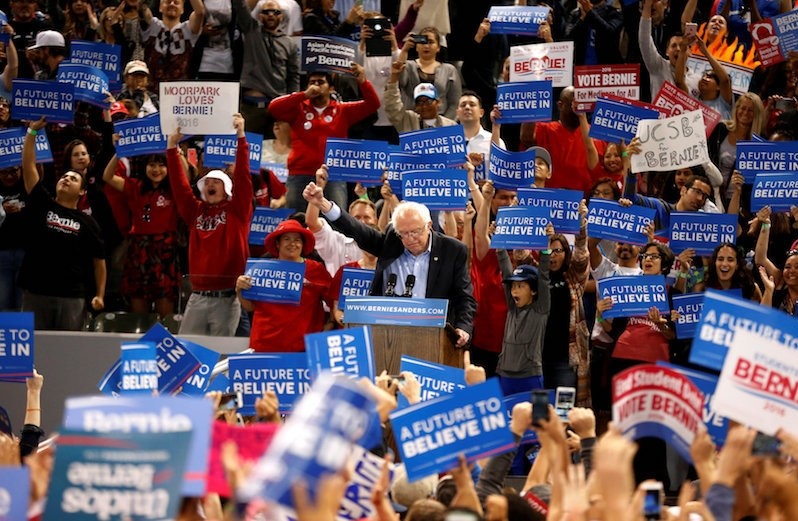 U.S. Democratic presidential candidate Bernie Sanders announces to the crowd that he had just won Oregon during a rally in Carson, California, U.S.. (Reuters Photo)
by May 18, 2016 12:00 am

Bernie Sanders was declared the winner in the Democratic primary in the north-western US state of Oregon, while Hillary Clinton claimed victory by a tiny margin in Kentucky.

The split result in Tuesday's contests leaves the candidates locked in their months-long battle to determine who will represent the centre-left Democratic Party in November presidential elections.

Sanders told supporters in California as the results came in that he was in the race for the long-haul despite trailing Clinton in the overall number of delegates need to secure the party nomination at its July convention.

Most delegates are awarded based on the results in state-by-state primary contests, but party officials can vote for whomever they choose and heavily favour Clinton.

"We are in until the last ballot is cast," said Sanders.

Oregon is known as a liberal bastion on the US West Coast that was seen as fertile ground for Sanders, a US senator from Vermont and a self-described democratic socialist.

Clinton claimed victory in the primary in the southern state of Kentucky in a razor-thin result. Official vote counts showed her with a lead of fewer than 2,000 votes.

The close finish means the two candidates will split the pledged delegates from the state.

Clinton has strong ties in Kentucky, where she won the 2008 primary versus Barack Obama and where she has powerful political allies dating to the time of husband Bill Clinton's presidency in the 1990s.

However she lost to Sanders in neighbouring West Virginia after negative comments about the region's coal industry that likely also hurt her in eastern Kentucky, while Sanders' economic message resonated among the state's working-class and young voters.

Clinton has a strong lead in the total number of delegates needed to secure the nomination with 2,291 total delegates to Sanders' 1,528 after Tuesday's contest, according to a tally kept by the New York Times. The figure puts her fewer than 100 delegates away from the 2,383 needed to win the nomination.

On the Republican side, Donald Trump is the party's presumptive nominee after his remaining challengers left the race earlier this month.

Republicans in Oregon overwhelmingly supported Trump as the primary there went on despite the businessman having already virtually secured the nomination. Republicans in Kentucky gave Trump the nod in a party caucus in March and therefore were not voting on Tuesday.

Trump has already turned his attention to a likely November match-up against Clinton.

In an interview Tuesday with Fox News journalist Megyn Kelly, Trump declared he will accept nothing less than the White House.

"If I don't go all the way, and if I don't win, I will consider it to be a total and complete waste of time, energy and money," he said.

The interview was closely watched after Trump last year disparaged Kelly for a question in a debate about his treatment of women followed by months of personal attacks on the journalist.

Trump also struck a deal late Tuesday with the Republican National Committee to establish joint fundraising committees that allow the campaign to share funds with other Republican candidates.

The announcement is the latest sign the party establishment is gradually accepting the political newcomer as its standardbearer despite ongoing concern within some segments of the party about his brash style and unorthodox policy views.