State of emergency declared in Venezuela amid protests 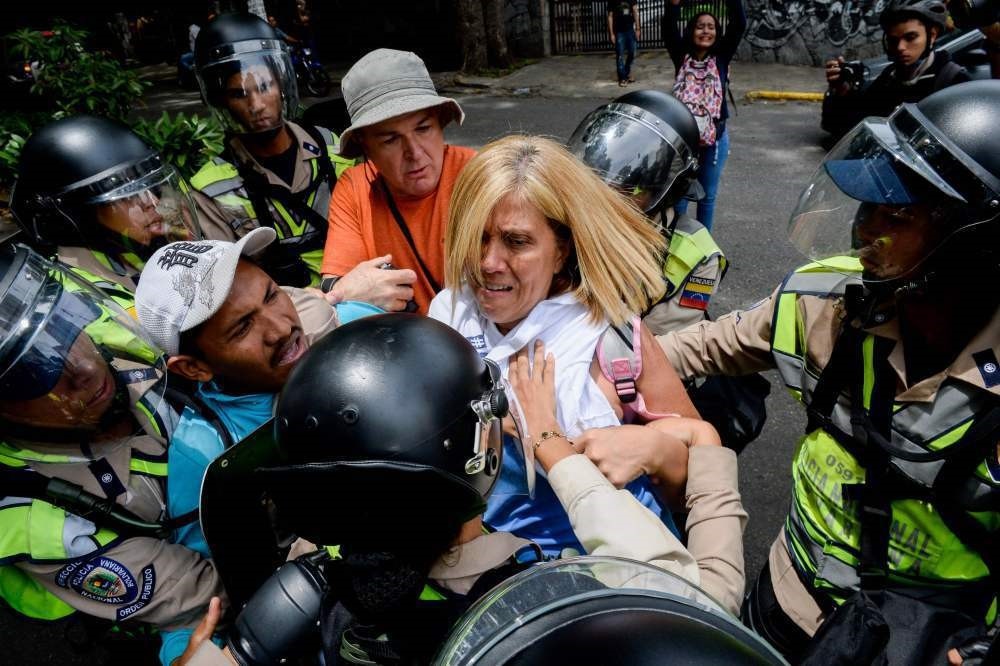 by May 20, 2016 12:00 am
Venezuelan protesters demanded a referendum on ousting President Nicolas Maduro on Wednesday despite riot police firing tear gas and a state of emergency being declared that the opposition has blasted as unconstitutional. But Maduro warned that if anti-government acts turned violent, he "will not hesitate" to ratchet up the extraordinary measures in force "to fight for the peace and security of [Venezuela]." The opposition organized the demonstrations in Caracas and 24 other cities and towns to press for a recall referendum against Maduro this year.

More than 1.8 million signatures calling for the vote have been gathered on a petition that was handed to the National Electoral Council (CNE) two weeks ago. Police and soldiers using tear gas and pepper spray blocked around 1,000 demonstrators from marching on the CNE headquarters, press agencies including Agence France-Presse (AFP) witnessed. Some of the protesters threw rocks and bottles at the forces barricading them in. "Recall! Recall! Maduro Out!" the crowd yelled, holding aloft anti-government placards and Venezuelan flags. Incidents were reported during demonstrations in five Venezuelan states. Some 30 people were arrested, the opposition and nongovernmental organizations said.

The protests were the first since the 60-day state of emergency the unpopular Maduro imposed this week that gives broad powers to security forces to maintain public order.

The congress, controlled by the opposition, on Tuesday rejected the decree establishing the state of emergency. But the Supreme Court, which has many judges appointed by Maduro's late predecessor Hugo Chavez, may overrule that, as it has other congressional decisions. If it is maintained regardless, the opposition has urged the public to defy the state of emergency. It has also asked the army to decide whether it backs the constitution or Maduro. In Wednesday's protest, National Assembly speaker Henry Ramos Allup urged the government to come to a peaceful resolution over the crisis.

Vice President Aristobulo Isturiz called the referendum push a "trap" and urged the opposition to instead focus on the next presidential election in December 2019. Maduro claims the adversity he is facing is manipulated by United States interference working with Venezuela's "fascist" right. By way of evidence, he said a U.S. AWACS surveillance plane twice violated his country's airspace last week. The U.S. Department of Defense denied that allegation on Wednesday. To counter the possibility of foreign "armed intervention," Maduro has ordered military exercises for Saturday.

If the opposition manages to bring about a recall referendum, the vote must constitutionally be held before Jan. 10, 2017, in order to trigger new elections. Otherwise a successful recall vote would simply transfer power from Maduro to Isturiz. The country's dire condition – with a shrinking state-led economy, runaway inflation and rampant crime – has turned much of the population against Maduro. Seventy percent wants to see a new government, polls show. "The people are going hungry. We are tired of lining up, of killing ourselves for just a carton of eggs or some bread," said Migdalia Lopez, 51, lining up for bread in the town of Guarenas, east of the capital. Lopez said she used to be a stalwart voter for Chavez and his "socialist revolution," and initially gave her support to Maduro but not anymore. "Now the people no longer want revolution," she said. "What they want is food."
RELATED TOPICS