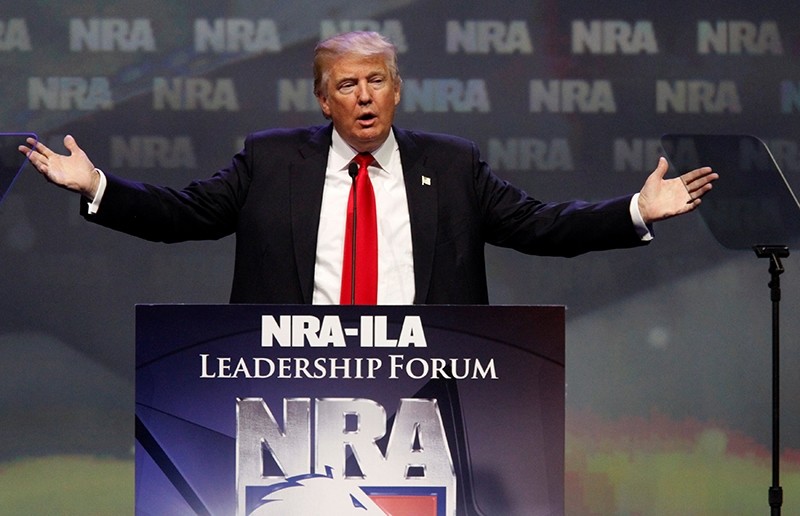 Republican presidential candidate Donald Trump addresses members of the National Rifle Association during their NRA-ILA Leadership Forum
by Daily Sabah with AA May 21, 2016 12:00 am

Presumptive Republican presidential nominee Donald Trump pledged Friday to go after Daesh "big league" if he wins the election in November, but would refrain from attacking Syria's Bashar Assad.

"I would have stayed out of Syria, and I wouldn't have fought so much for Assad, against Assad, because I thought that was a whole thing," he said on the Morning Joe program on MSNBC cable television station. "We have Iran and we have Russia totally on the side of Assad, and that's not the reason I'd stay out necessarily, but certainly it's a complicating factor."

The U.S. has "bigger problems than Assad", he said.

When asked by co-host Joe Scarborough about past military inventions, Trump maintained that he opposes those in Iraq and Libya, but said he would not hesitate to go after Daesh.

"I would go after ISIS big league", he said using another acronym for Daesh, adding that he would tell U.S. generals "to knock the hell out of" the group.

He lambasted the Obama administration's diplomatic efforts to broker a nuclear accord with Iran, saying that it has bolstered the Islamic Republic's presence on the international stage.

The Obama administration has outspokenly stated that it will only focus on the fight against Daesh, but has not been very direct on its stance on Assad's fate. Obama had approved a previous, CIA-backed program in the summer of 2013 that was supposed to provide heavy weaponry to vetted opposition groups in the northern part of the country, to help them get closer to defeating Assad. That program, though, fell apart in December. However, back in April this year Obama had said: "It would be a mistake for the United States, or Great Britain or a common nation of Western states to send in ground troops and overthrow the Assad regime". Meanwhile Turkey has repeatedly called for a unified stance to oust Assad and create a transition government to bring the country's five-year civil war to an end. It has also strongly rejected plans to partition Syria.