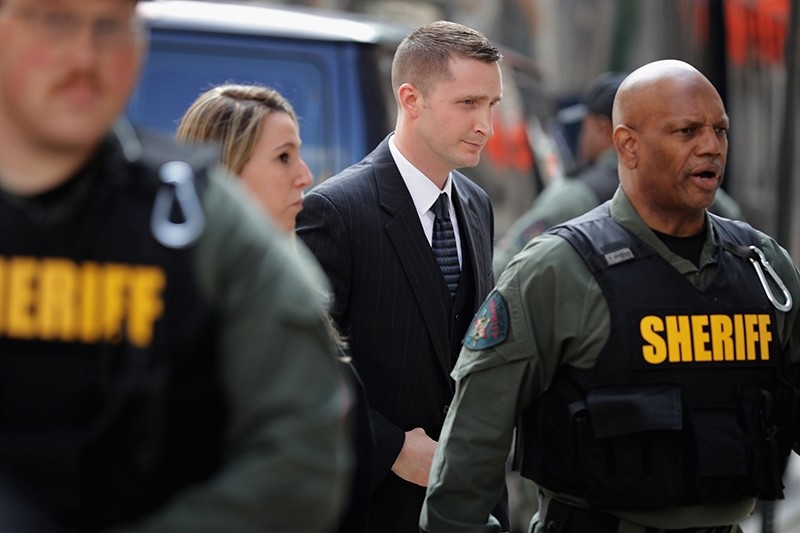 Baltimore Police Officer Edward Nero (C) arrives at the Mitchell Courthouse-West on the day a judge will issue a vertict in his trial May 23, 2016 in Baltimore, Maryland. (AFP Photo)
by reuters May 23, 2016 12:00 am

Baltimore police officer Edward Nero was acquitted on Monday of four charges in the 2015 death of black detainee Freddie Gray, the second setback for prosecutors in a case that triggered rioting and fueled the Black Lives Matter movement.

Baltimore City Circuit Court Judge Barry Williams, who heard the case in a bench trial, told a packed courtroom that Nero, 30, had acted as any officer would during Gray's arrest in April 2015.

Nero is the second officer to be tried and faced misdemeanor charges of second-degree assault, reckless endangerment and two counts of misconduct in office. The first trial of an officer in the 25-year-old Gray's death ended in a mistrial.

Mayor Stephanie Rawlings-Blake issued a statement urging calm. The only incident in the immediate aftermath of the verdict involved protesters chasing members of Nero's family into a parking garage, yelling, "No justice, no peace."

State's Attorney Marilyn Mosby had charged Nero with arresting Gray without probable cause when he ran from him and other officers unprovoked in a high-crime area. She also contended Nero did not secure Gray in a police transport van. Gray died from a spine injury suffered in the van.

Nero's lawyers had argued that Gray's arrest was justified and that the officer had little to do with it. He never touched Gray except when he tried to help him find an asthma inhaler and helped lift him into the van, they said.

During a 25-minute reading of his decision, Williams said Nero acted as a "similarly situated" officer would and that prosecutors had failed to prove their case. He said Nero's partner, Garrett Miller, had testified that Nero had done little during the arrest.

"Miller stated unequivocally that he was the one who detained and handcuffed Mr. Gray," he said.

Nero still faces an internal department investigation. There was no response from Mosby's office since those involved in the case are under a court gag order.

In a statement, defense attorney Marc Zayon said Nero appreciated "the reasoned judgment" of Williams in his verdict and called on Mosby to dismiss charges against the five other officers accused in the case.

Gray's death a week after his arrest had sparked a day of rioting in which nearly 400 buildings were damaged or destroyed in the majority black city of 620,000 people. The case helped stoke the Black Lives Matter movement and national debate over policing in minority communities.

William Porter was the first officer tried in the case and his trial ended in a hung jury in December. The charges against other officers range from misconduct to second-degree murder.

The hashtag #FreddieGray began trending on Twitter after news of Nero's acquittal. Some black activists expressed their disappointment.

"#FreddieGray should be alive today," wrote DeRay Mckesson, a key figure in the Black Lives Matter movement who unsuccessfully ran for mayor of Baltimore in April.

Tim Maloney, a Greenbelt, Maryland, lawyer who has handled police misconduct cases, said if prosecutors had been successful, any officer who made an arrest without clear probable cause would be subject to criminal prosecution.

"That would have an incredible chilling effect," he said.