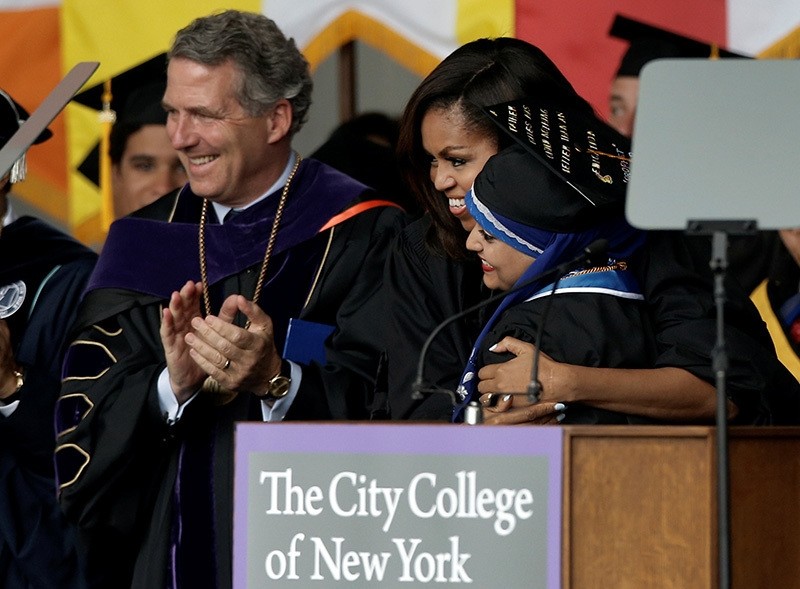 First Lady Michelle Obama took a veiled swipe at Donald Trump while delivering a passionate defense of immigration and diversity, in the final commencement address of her husband's presidency on Friday.

"Infusions of new cultures and new ideas, generation after generation, created the matchless alchemy of our melting pot and helped us build the strongest, most vibrant, most prosperous nation on the planet," Obama told the 2016 graduating class of City College of New York.

"Some folks out there today seem to have a very different perspective," she said, appearing to allude to the presumptive Republican nominee for president, without using his name.

"They seem to view our diversity as a threat to be contained rather than as a resource to be tapped, they tell us to be afraid of those who are different," said the first lady, wife of Democratic president Barack Obama in remarks that appeared more pointedly political than usual.

"They act as if name calling is an acceptable substitute for thoughtful debate, as if anger and intolerance should be our default state."

Donald Trump has vowed to build a wall along America's southern border to keep out illegal immigrants, and has run a controversial campaign insulting women, Mexicans, Muslims, the disabled and journalists whom he dislikes, among others.

"In America we don't give in to our fears, we don't build up walls to keep people out, because we know that our greatness has always depended on contributions from people born elsewhere but sought this country," Obama said.

She deliberately chose CCNY, a public college and immigrant-rich New York for her final address to a university graduating class.

The school welcomes students who speak more than 150 different languages and come from every possible background in a city that for centuries was the gateway for immigrants striving for a better life in America, Obama said.

While she did not mention Trump, Michelle Obama did reference ex-secretary of state Colin Powell, a CCNY graduate and son of Jamaican immigrants who served Republican president George W. Bush, calling him a role model for young people.