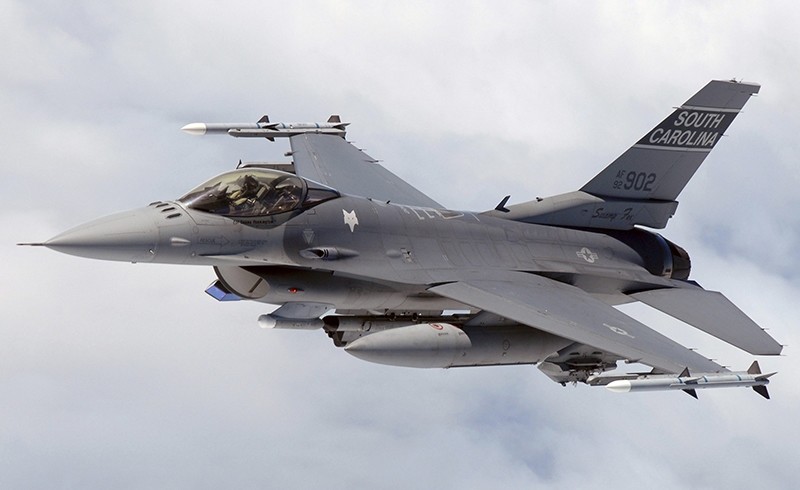 The base commander, Col. Nicholas Gentile, said the two pilots are among the most experienced in the unit.

Gentile said he could not yet release their names, but said they are back in South Carolina being debriefed as part of the investigation.

He said the two jets were part of a group of six that was conducting night training operations in preparation for an upcoming deployment that he could not discuss.

The pilots were wearing night vision goggles when the collision occurred, Gentile said.

"We had planes spread out across the Southeast last night," Gentile said, adding that the bombing range is only about a 15-minute flight from the South Carolina base.

The F-16C models practice maneuvering against opponents and were involved in some of the earliest deployments in the Persian Gulf War in the 1990s.

It has been decades since South Carolina F-16s have been involved in a collision, he said, though he did not know the date of the last time it occurred. The 169th Fighter Wing has 28 of the aircraft.

There were no injuries on the ground, Jefferson County Fire Chief Jim Anderson said Wednesday.

"We have located the debris from the first aircraft, which was located in a wooded area," Anderson said.

Crews were still searching for the second aircraft but expected to find it nearby, he said.

The pilots were talking normally and did not appear to be hurt when they were found, Anderson said.

"We transported them to the hospital for precautionary measures until the military could pick them up," Anderson said.

One pilot was found in a pasture and the other at the edge of some woods.

The pilots did not discuss details of the crash with him, Anderson said.

King said South Carolina National Guard commander Maj. Gen. Robert Livingston Jr. was in Washington on Tuesday night when he got news of the crashes and was returning to Columbia to be updated.

The South Carolina Air National Guard and the U.S. Air Force are dispatching teams to investigate the collision.

The collision comes after both of the military's precision flying teams suffered crashes last week.

A Blue Angels F/A-18 crashed last Thursday near Nashville, Tennessee, while taking off for a practice session. The pilot, Marine Capt. Jeff Kuss, was killed.

Also Thursday, a Thunderbirds F-16 crashed outside Colorado Springs, Colorado, but that pilot, Maj. Alex Turner, ejected safely. The Thunderbirds had just performed over the open-air graduation ceremony at the nearby Air Force Academy, where President Barack Obama spoke.

In May, two Navy jet fighters collided off the North Carolina coast. The four people on board the jets were pulled from the Atlantic Ocean by a commercial fishing ship.

The previous story has been corrected to show the correct name of the bombing range as the Bulldog Military Operations Area, rather than the Townsend Bombing Range.