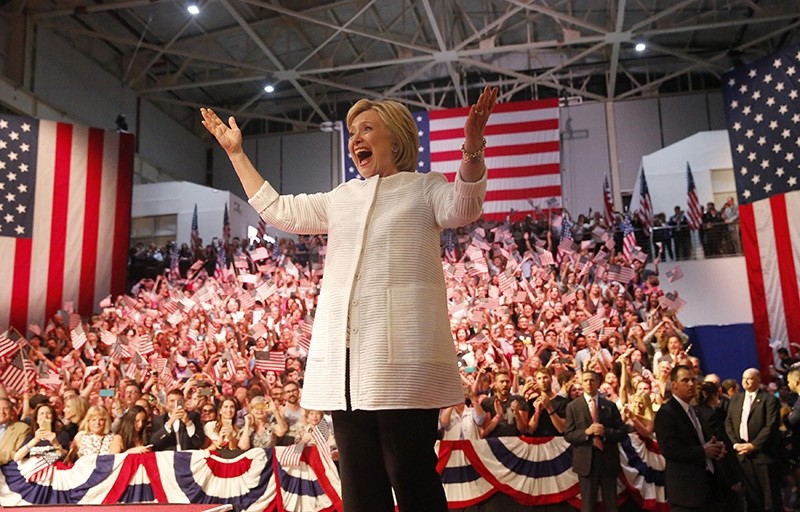 Hillary Clinton reacts as she arrives to speak to supporters at her California presidential primary night rally in Brooklyn, New York, June 7, 2016 (Reuters)
by Daily Sabah with Wires Jun 08, 2016 12:00 am

Claiming her place in history, the former first lady, senator and secretary of state, Hillary Clinton, declared victory Tuesday night in her bruising battle for the Democratic presidential nomination to become the first woman to lead a major American political party and casting herself as the beneficiary of generations who fought for equality.

"This campaign is about making sure there are no ceilings, no limits on any of us," Clinton said during an emotional rally in Brooklyn, eight years to the day after she ended her first failed White House run.

Clinton had already secured the delegates needed for the nomination, according to an Associated Press tally. She added to her totals with victories in New Jersey, New Mexico and South Dakota, three of the six states that voted on Tuesday.

Clinton faces a two-front challenge in the coming days. She must appeal to the enthusiastic supporters of her rival, Bernie Sanders –who vowed to stay in the race despite having no realistic path to the nomination – and sharpen her criticism of presumptive Republican nominee Donald Trump.

Clinton also attacked Trump for using divisive rhetoric that belittles women, Muslims and immigrants. She took specific aim at his condemnation of an American-born judge of Mexican heritage. "The stakes in this election are high and the choice is clear. Donald Trump is temperamentally unfit to be president and commander in chief," Clinton said.

Sanders, speaking at a rally in Santa Monica, California, said he had spoken to Clinton late Tuesday. He notably stripped his speech of all criticism of her, but still pledged to compete in next week's final primary in the District of Columbia and take his fight for "social, economic, racial and environmental justice" to the Democratic convention.

Clinton had an edge over Sanders in California, but votes were still being counted early Wednesday. Sanders has hoped a win in California would give him ammunition to convince super delegates to abandon Clinton before the Democratic convention in July.

Clinton is eager to avoid a convention fight and to set her sights fully on Trump. She was biting and sarcastic as she took on the billionaire tycoon, accusing him of wanting to win "by stoking fear and rubbing salt in wounds – and reminding us daily just how great he is."

Even as the Democratic race was ending, new turmoil broke out among the Republicans. GOP leaders recoiled at Trump's comments about a Hispanic judge, with one senator even pulling his endorsement.

Trump capped his difficult day with victories in California, New Jersey, New Mexico, South Dakota and Montana. But he was muted at his victory rally, saying he understands "the responsibility" of leading the Republican Party. He also made a direct appeal to dejected Sanders supporters and other Democrats.

"This election isn't about Republican or Democrat, it's about who runs this country – the special interests or the people," he said. Trump promised a major speech next week on Clinton and her husband, former President Bill Clinton.

President Barack Obama called both Clinton and Sanders late Tuesday. The White House said Obama congratulated Clinton for "securing the delegates necessary to clinch the Democratic nomination for president" and praised her "historic campaign," although he did not formally endorse her.

Sanders picked up wins in North Dakota and Montana, where a small number of delegates were up for grabs. Sanders's achievements have been remarkable for a candidate who was unknown to most Americans before the campaign. He has drawn massive crowds to rallies around the country and built a fundraising juggernaut based largely on small, online donations. The Vermont senator has been particularly popular with young voters, an important piece of the Democratic base.

Still, Clinton's victory has been broadly decisive. She leads Sanders by more than 3 million votes and has 2,469 delegates to Sanders' 1,637. That count includes both pledged delegates and super delegates.

Republicans had appeared unified after Trump vanquished his last opponents about a month ago. But the real estate mogul has continued to make controversial statements, frustrating party leaders.

The latest cause for GOP concern was his insistence that a judge handling a legal case involving the businessman's defunct Trump University was being unfair in his rulings. Trump has said U.S. District Judge Gonzalo Curiel cannot be impartial because the jurist's parents were born in Mexico and Trump wants to build a wall along the border.

Illinois Senator Mark Kirk, who is locked in a close re-election fight, became the first lawmaker to pull his endorsement of Trump. House Speaker Paul Ryan said Trump's assertion was the "textbook definition of a racist comment," but he would continue to support Trump anyway.

Trump released a statement saying he does "not feel one's heritage makes them incapable of being impartial."

In January, just four weeks before the opening of the 2016 primary contest, Trump sparked a global backlash after he called for a "total and complete shutdown" of all Muslims entering the U.S. He also called for a wall to be built along the southern border to block Mexicans, whom he called "rapists, murderers," while launching his presidency bid at Trump Tower in New York in June 2015. Trump's proposal to ban Muslims has been condemned as un-American and counterproductive by Republicans and Democrats alike, yet his hardline approach on immigration has fueled his popularity among the overwhelmingly white Republican primary electorate.