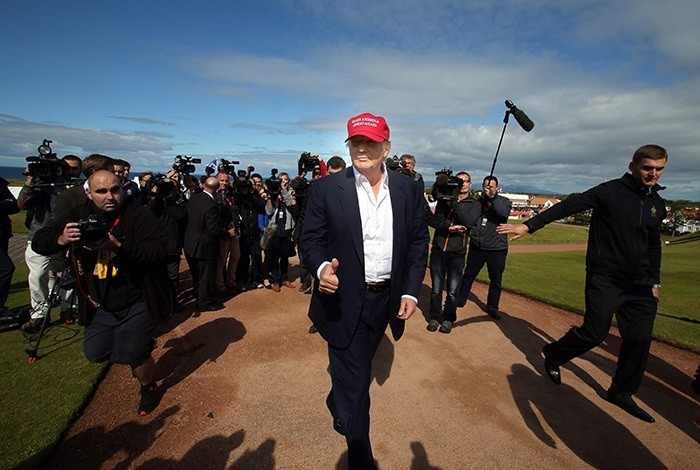 Scottish Muslims have invited Donald Trump to visit a mosque and learn about their faith during his visit to Scotland this month in the hope of changing his views.

The presumptive Republican U.S. presidential candidate, whose mother was Scottish, last year proposed a temporary ban on Muslims entering the United States as a response to terrorist attacks in Paris and California, causing a furor in Europe.

Accepting a visit to learn about the Muslim community might help show that he is not so extreme, Edinburgh Central Mosque Imam Yayha Barry told Reuters.

"I would say: 'Hi Donald, we're Muslims, welcome to our mosque! Do you still see Muslims as a threat to Western civilizations?'" he said.

Contacted by French Press Agency (AFP), Mohammad Saleem Irshad from the Annandale Mosque said: "We wanted to tell Mr. Trump that what he thinks about Muslims is not a reality".

Trump's views prompted widespread opposition in Britain, where he owns two golf courses on the west and east Scottish coasts. His comments about stopping Mexican migrants entering the United States also caused offense, leading to the withdrawal of Scottish business and academic accolades.

Neither Cameron nor Scotland's First Minister Nicola Sturgeon plan to meet him on his visit, which coincides with the result of Britain's referendum on EU membership on June 24.

Spiritual leaders in the Islamic community invited Trump to "learn more about the Muslims that he offends."

"We would welcome the opportunity to show him the work that we are doing in the community in Edinburgh when he comes to Scotland," said Hafiz Ghafoor of Annandale Mosque and Munawar Hussain, secretary of Roxburgh St. Mosque and Islamic Centre, in a joint statement.

Trump's relationship with Scotland has been rocky since he contested a decision to build an offshore wind farm opposite his golf course in Aberdeenshire. His trip will include a visit there as well as to his courses at Turnberry, in southwestern Scotland, and Doonbeg, in Ireland.

Protests at Trump's "misogynist, racist and xenophobic" views are planned by Aberdeen University students during his visit, the president of the Students' Association said.

A spokesperson for the Trump Organization did not respond to a request to comment.

Scottish Liberal Democrat leader Willie Rennie said Trump should witness firsthand the work being done by local Muslims to reach across faiths and help those in need.

"Muslims are our friends, colleagues, family and neighbors. When he insults them in such a grotesque manner he insults us all."

About 77,000 Scots are Muslims, or 1.4 percent of the population, according to the latest official census in 2011.

According to a recent survey by the Council on American-Islamic Relations (CAIR) -- the country's largest Islamic civil rights group -- 73 percent of registered Muslim voters in six states said they would vote in primary elections.

In congressional election two years ago, 69 percent of Muslim voters in California, Florida, Illinois, New York, Texas and Virginia said they would vote, according to a CAIR survey.

The U.S. Council of Muslim Organizations has found growing Islamophobia to be the most important issue for Muslim voters in 2016. It was listed as third in the group's 2014 survey.