Hillary Clinton vs Donald Trump: their strengths and weaknesses 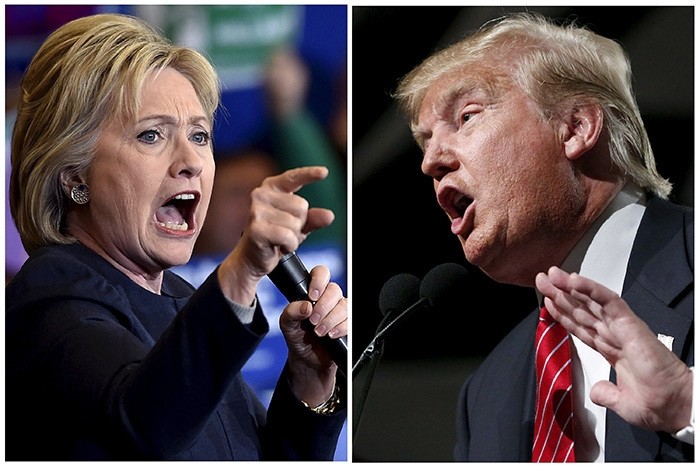 Hillary Clinton and Donald Trump are part of the same generation, but that is about the only thing they have in common; their careers, personalities and political instincts could not be more different.

Here are highlights of the strengths and weaknesses of the presumptive Democratic and Republican presidential nominees, five months before November's general election.

"If Hillary Clinton wins, that would have been two presidencies in a row where it was not a white man in the Oval Office," American University's Jennifer Lawless, an expert in women in politics, told AFP.

As she takes on the role of pioneer, Clinton could help inspire Democratic women, and some men, to be more involved in the political process.

"I think it needs a woman's touch," actor Ryan Gosling told the Evening Standard magazine. "I've always liked women more... They are better than us. They make me better."

When she was still known as Hillary Rodham, the young lawyer was already involved in women's and children's causes -- a worthy calling beyond reproach.

She put her successful career on hold to become the political partner to her husband Bill, following him from the Arkansas governor's mansion to the White House.

The 68-year-old former first lady then established her own name in politics, as a two-term senator from New York and then as secretary of state for Barack Obama's first four years in office.

"There's nobody else right now who is more qualified to be president," supporter Linda Rosel, a 60-year-old criminal investigator in Las Vegas, said in February.

The scandals run the gamut: from the Whitewater real estate investment controversy, in which the Clintons were eventually cleared, to the Benghazi attacks and her use of a private email server while at the State Department, which has made her the subject of an FBI probe.

All of those have made her the most unpopular and polarizing Democratic presidential candidate in recent history.

"I think if you've been attacked as much as she has for standing up for people the way she has, yeah, you pay a price for that," her campaign manager Robby Mook told MSNBC television.

Public speaking - not her strong point

"I am not a natural politician, in case you haven't noticed, like my husband or President (Barack) Obama," Clinton acknowledged in March.

Her speeches often get bogged down in policy details, and don't flow. Americans have, however, elected a president with mediocre oratory skills before... Dwight Eisenhower, in 1952.

Career in business, not politics

Trump is "not a career politician. Career politicians are killing our country," defense contractor Matthew Weiner, 55, said in October. "He's a successful businessman. Our country is set up on capitalism; we are a big business."

Many voters see in the 69-year-old Trump a gifted businessman with the Midas touch who can balance the budget and create jobs. Trump says he is worth $10 billion, but independent estimates say his fortune is less than half that.

Democrats will pick holes in this image of the consummate, successful mogul, pointing out his failures in the casino business and the controversy swirling around his Trump University.

Trump's rallies are never boring, he has said. Between the scuffles, the protesters who sneak in to disrupt the proceedings, and the stream of insults and attacks from the candidate himself, the audience is always riveted.

Trump has been a tabloid favorite in the Big Apple since the 1980s, but he knows how to work the media, giving near-daily interviews to television networks, who have offered him more coverage than any other candidate by far.

His ability to captivate an audience, even with his somewhat stream-of-consciousness style, will be a major challenge for Clinton to overcome.

Trump's campaign has been built on the idea that the establishment needs a wake-up call. But in his quest to keep things most decidedly politically incorrect, the Republican candidate has failed to develop a solid policy platform.

His policy ideas are mainly soundbites -- about building a wall on the Mexican border, or making America's allies pay more for US military assurances -- and he often goes for an incendiary remark to make headlines.

By attacking Muslims and immigrants, he has galvanized white voters on the extreme right, but shocked some of his Republican allies and equally galvanized Hispanic voters against him.

"My advice to the nominee would be to start to talk about the issues that the American people care about and to start doing it now," Republican Senate Majority Leader Mitch McConnell warned Tuesday.

"It's time to quit attacking various people that you have competed with or various minority groups in the country and get on message."