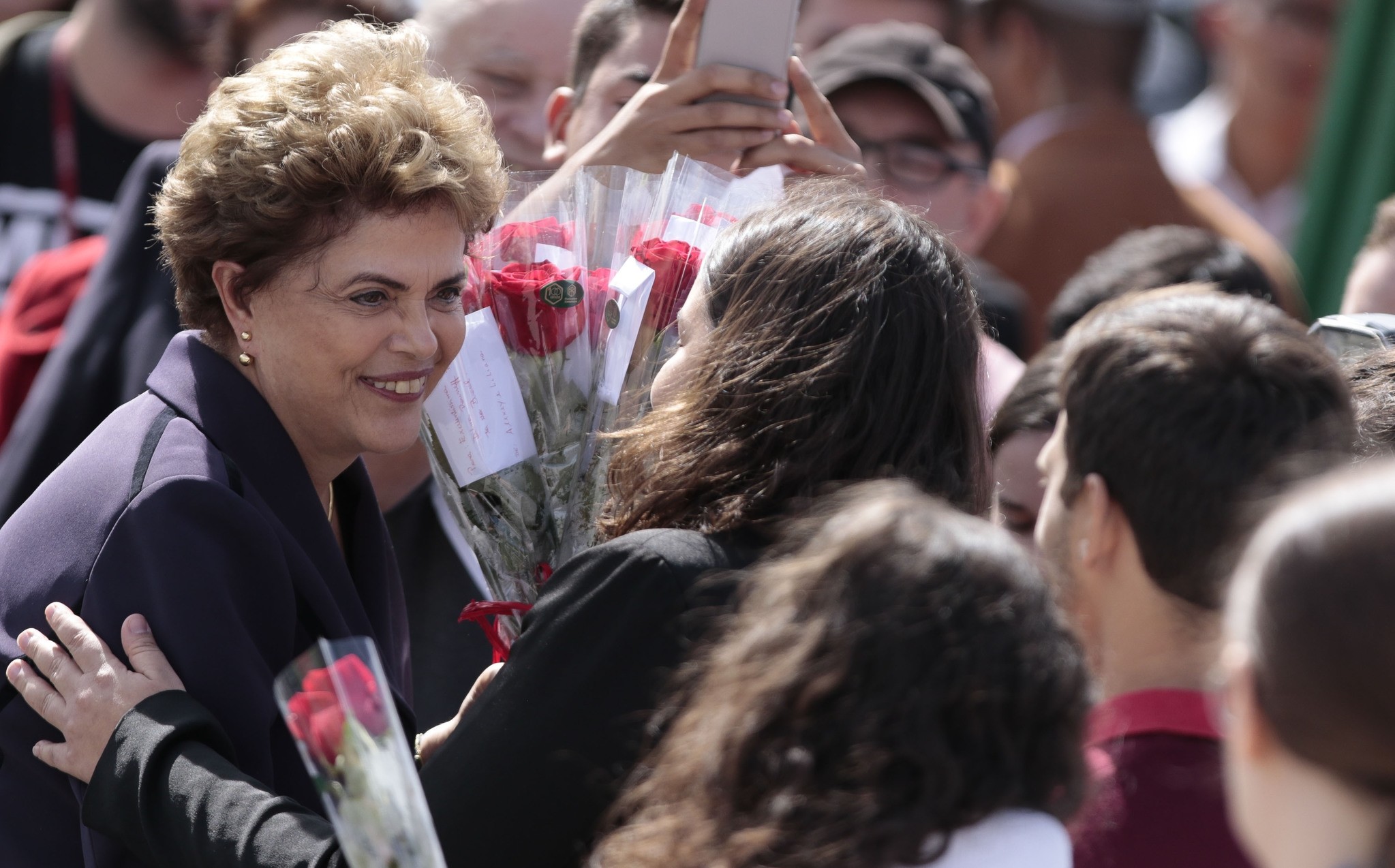 Brazilian suspended President Dilma Rousseff (L) greets workers during her visit to the construction site of Sirius in Campinas, Sao Paulo, Brazil on June 9, 2016. (AFP Photo)
by Jun 10, 2016 12:00 am
Brazil's Dilma Rousseff said she would call a referendum on holding early elections if she is reinstated as president, an offer analysts saw as a bid to sway undecided senators to help clear her in an impeachment trial.

If Rousseff survives the Senate trial, expected to conclude in August, the Constitution would provide for her to serve out her term until 2018, although she would be scarred and in a weak position to govern.

Rousseff's proposal for early elections, which emerged on Thursday, is seen by many political analysts as a way out of Brazil's political crisis because it would subject a political class tainted by scandal to a popular vote.

Rousseff's supporters have questioned the legitimacy of an interim government led by her Vice President Michel Temer, which is governing while she is suspended for the duration of the trial.

Just one in 10 Brazilians view Temer's government positively and a majority want new elections this year, a poll showed this week. The survey also showed that nearly two-thirds of Brazilians support Rousseff's impeachment.

"We must consult the population to rebuild a constitutional pact that was broken by the impeachment process," Rousseff said in an interview on Thursday on government television channel TV Brasil.

Rousseff told a group of senators and political allies on Thursday that she was open to the holding of a plebiscite for the country to decide new elections, the Folha de S.Paulo newspaper reported.

The leftist leader was suspended on May 12 when the Senate voted 55-22 to put her on trial for allegedly breaking budget laws. To block her conviction and definitive ouster she needs five more votes, or one-third of the Senate.

Temer's camp has opposed the idea of early elections, which would require a constitutional amendment by Congress.

A wave of scandals stemming from a corruption investigation at state oil company Petrobras have buffeted his month-old government and weakened the resolve to remove Rousseff among some senators who voted for the impeachment trial.

Business leaders and investors have praised Temer for picking a strong economic team led by former central bank governor Finance Minister Henrique Meirelles to rescue Brazil from a fiscal crisis and the worst recession since the 1930s.

But his popularity has been undermined by policy reversals and allegations by prosecutors - based on recordings leaked to the media - that members of his Cabinet and the leader of his Brazilian Democratic Movement Party (PDMB) sought to obstruct the investigation into the massive graft scheme at Petrobras.

Temer has canceled a trip to northeastern Brazil, the first travel plans of his interim term, in order to personally deliver a proposed constitutional amendment to Congress on Wednesday, according to two presidential aides who asked not to be named.

The proposed amendment capping public spending growth is a centerpiece of Temer's plan to restore fiscal discipline and get a handle on Brazil's burgeoning debt load.