Will Brock Turner actually serve his lenient 6-month sentence for Stanford sexual assault? US media not so sure 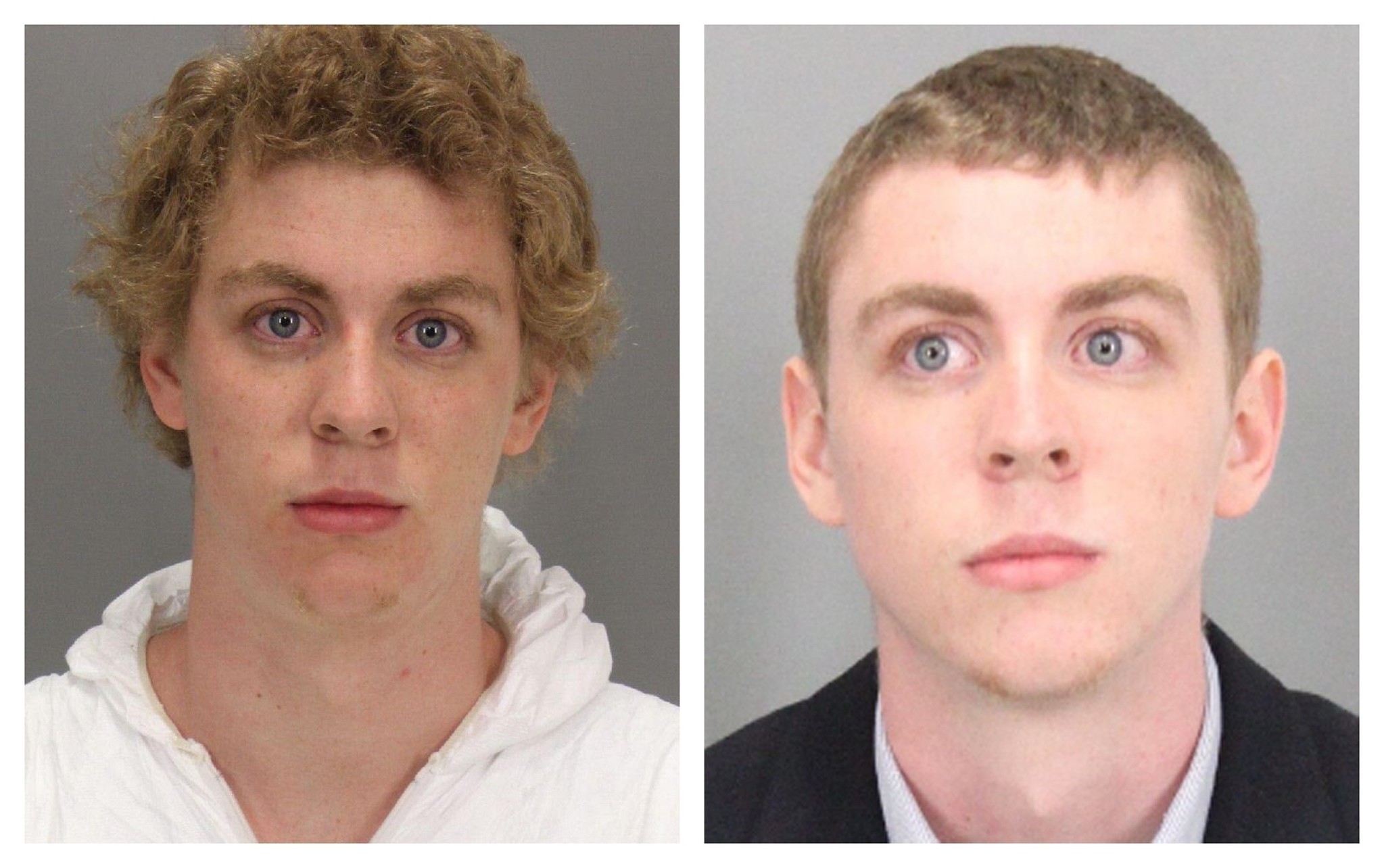 A combination booking photos shows former Stanford University student Brock Turner (L) on January 18, 2015 at the time of arrest and after Turner was sentenced to six months in county jail. (REUTERS Photo)
by Daily Sabah with Agencies Jun 12, 2016 12:00 am

The six-month jail sentence for former Stanford University swimmer Brock Turner who was convicted of sexually assaulting an unconscious woman in a fraternity party in 2015, has caused national uproar and a debate about how U.S. courts handle such cases.

Stanford police arrested Turner for assaulting a woman he had encountered at a fraternity party in January 2015. Two graduate students confronted the freshman as he attacked the unconscious victim by a garbage bin, then chased him down and held him until officers arrived. In June 2016, Santa Clara Superior Court Judge Aaron Persky sentenced him to six months in jail.

Many find this 6-month sentence far too lenient for such a serious crime, for which prosecutors had asked that Turner be put behind bars for six years.

Also, Turner is not likely to serve his measly sentence of six months, according to many U.S. media outlets.

Jensen explained that inmates sentenced to county jail in California generally serve 50 percent of their sentences. The court system can extend the sentence to its full length, if there are any disciplinary problems.

A probation report submitted to the judge had also recommended against sending Turner to prison and said "this case, when compared to other crimes of similar nature, may be considered less serious due to the defendant's level of intoxication."

Another thing that's prompts fear that Turner won't get the sentence he deserves can be observed in many past cases.

ALL CHARGES DROPPED JUST BEFORE TRIAL

In 2015, Dale Couch, a former Manatee County Sheriff's Lieutenant was charged two counts of lewd and lascivious molestation of a child under the age of 12. After he was arrested, he pleaded no contest to battery and the other charges were then dropped.

He was only given 12 months of probation along with anger management courses.

A former state trooper Samuel H. McHenry pleaded guilty in March for raping a traffic accident victim last December after throwing her in the back of the cop car and driving her to a secluded area.

McHenry pleaded guilty in March and was given a measly 180-day sentence, which he didn't have to spend in jail due to his status.

Felony charges of rape and sodomy against McHenry were dismissed right as part of a plea agreement he filed in Butler County District Court in Greenville.

Arrested in November 2013 and initially charged with a 'super crime' (super aggravated sexual assault) because the victim was under 6 at the time, Trump did not receive a prison sentence, instead of the minimum 25-year sentence he had originally faced.

California Attorney General Kamala Harris, the top vote-getter in the state's U.S. Senate primary, was one of the first to join the criticism of the sentence given to Turner.

Harris, speaking to reporters in the San Francisco Bay area on Wednesday, said she was concerned the "victim's voice was not heard" at the trial.

"It was not respected, and she was not given dignity in the process," said Harris, a Democrat, according to video from a local television station.

Harris, who will face Democratic U.S. Representative Loretta Sanchez in the Nov. 8 Senate election, is the highest-profile elected official in California to question last week's sentence handed down on Brock Turner, 20, by a Santa Clara Superior Court judge.

"When someone is facing a 14-year (maximum sentence), which is what I believe was the exposure in this case, there has got to be extraordinarily mitigating facts to reduce it down to what I believe ended up being six months," Harris said. "And I don't know if the facts actually merit that kind of mitigation."

Politicians, including U.S. Vice President Joe Biden, and celebrities also joined the outpouring of support for the victim.

In a letter to Buzzfeed Thursday, Vice President Joe Biden wrote, "… while the justice system has spoken in your particular case, the nation is not satisfied."

Thousands of people have also started online petitions calling for the judge of the case to be removed, as Santa Clara County Superior Court Judge Aaron Persky received many death threats.

Officials said the judge, Aaron Persky, received death threats since imposing the sentence, even as he faces a possible recall effort led by a Stanford law professor.

The San Jose Mercury News and local broadcaster KPIX-TV reported on Thursday that between 10 and 20 prospective jurors refused to serve this week in an unrelated case being overseen by Persky, citing the judge's sentencing decision in the Turner case.

The furor also prompted a North Carolina pastor to write a widely circulated "open letter" to Turner's father, Dan Turner, in which he criticizes the father for seeking leniency from the judge in a much-derided missive that discussed his son's favorite foods and other memories.

"To be honest, I don't give a damn and if his victim was your daughter I'm quite sure you wouldn't either," John Pavlovitz wrote.

You took away my worth, my privacy, my energy, my time, my safety, my intimacy, my confidence, my own voice, until today; my independence, natural joy, gentleness, and steady lifestyle I had been enjoying became distorted beyond recognition | The victim

A day after Turner's sentencing, BuzzFeed published a letter, in which the unidentified victim detailed the assault in graphic terms, that she had read during the sentencing.

"You took away my worth, my privacy, my energy, my time, my safety, my intimacy, my confidence, my own voice, until today," she writes. "My independence, natural joy, gentleness, and steady lifestyle I had been enjoying became distorted beyond recognition."

The letter has been viewed over 5.7 million times, according to BuzzFeed, and generated an outpouring of sympathy on social media.

In contrast, a letter reported by several media outlets over the weekend that Turner's father, Dan Turner, purportedly filed to the court prior to sentencing drew jeers online. While the lengthy letter by Dan Turner talked about his son's "true remorse," critics seized on other parts of his remarks.

"Brock always enjoyed certain types of food and is a very good cook himself," Dan Turner wrote. "Now he barely consumes any food."

"Brock Turner's dad says his son shouldn't go to jail for '20 min of action,'" Julia Ioffe (@juliaioffee), a contributing writer at Politico Magazine and a columnist at Foreign Policy, wrote on Twitter. "And the poor boy's appetite is gone."