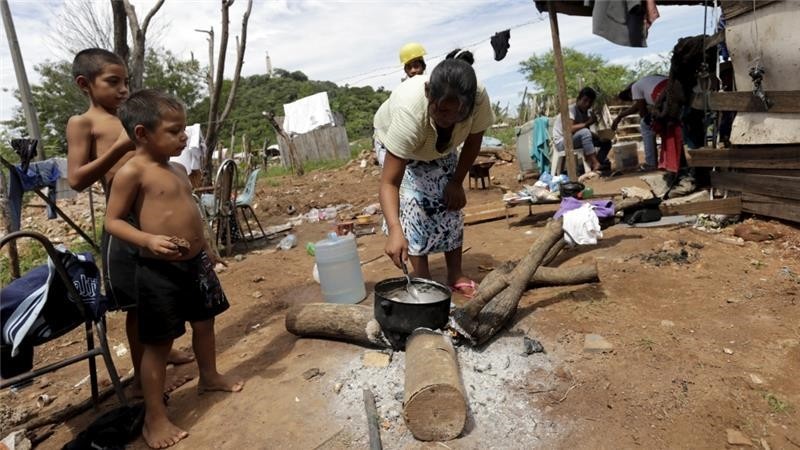 A Paraguayan woman cooks in one of Paraguay's poorest neighborhoods in Asuncion (Reuters Photo)
by French Press Agency - AFP
Jun 15, 2016 12:00 am

A third of Latin Americans who have risen out of poverty over the past 15 years could fall back into it due to the region's recession, a UN report showed Tuesday.

"We estimate there is a population of between 25 and 30 million citizens that today find themselves vulnerable to falling into poverty," said George Gray, the main author of the report and the chief economist for the UN Development Programme (UNDP) in Latin America.

"That represents one person in three of those who left poverty in the last 15 years -- it's a huge figure," he said as he presented the report to the media.

Titled "Multidimensional Progress: Well-being beyond income," the report defines poverty as living on less than $4 a day.

It notes, however, that 220 million people in Latin America -- 38 percent of the region's population -- while not officially poor are vulnerable, living on less than $10 a day.

Since the beginning of this century, Latin America lived through an unprecedented boom fueled by a global appetite for its natural resources and crops, the UN observed.

That allowed 72 million people, half of them in Brazil, to climb out of poverty and in many cases enter the middle class.

But an economic slowdown in recent years is threatening to undo much of that progress.

Between 2015 and 2016, the number of poor people in the region has risen for the first time in decades, the UN report said.

This year, collectively Latin America is forecast to see a second year of economic contraction, with unemployment rising.

The UNDP said the economic slowdown was not alone to blame for the rise in poverty, as the region also has a preponderance of informal and unskilled jobs, and taxes often hit poorer citizens the hardest.

It is urging Latin American governments to continue to set aside funds to combat poverty, and to focus on reducing gender equality faced by women.