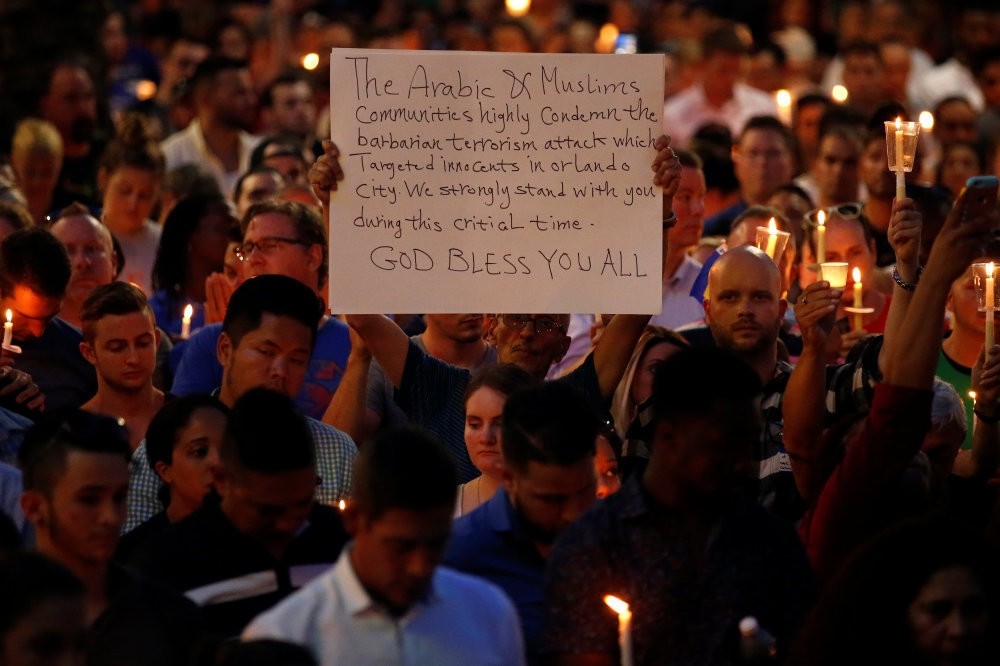 People take part in a candlelight memorial service day after the mass shooting at a nightclub in Orlando, Florida, June 13.
by Daily Sabah with Wires Jun 17, 2016 12:00 am

A Muslim community has become a target once again after a gunman killed 49 people in Orlando. Muslims in Fort Pierce reported insults and abuse in another example of increasing Islamophobia around the world

Since the Orlando massacre, the small Muslim community of Fort Pierce, Florida, the killer, Omar Mateen's, hometown, has found itself the target of hate-filled insults and abuse.

As the faithful arrive at the Fort Pierce Islamic Center, passing cars honk and their occupants fling out profanity-laced slurs against Islam, including not-so-veiled death threats.

Fort Pierce's only other mosque, located along a highway, is in a totally anonymous building behind an auto dealership. But anyone who did not know of the Islamic center's existence before Sunday's bloodbath at a gay nightclub in Orlando, Florida, cannot miss it now.

"We're scared," said Bedar Bakht, a taciturn Pakistani in his 50s who prepares the evening iftar dinner at which the faithful break their daylong fast during the Muslim holy month of Ramadan.

Many stay until nearly midnight for what is normally a time of celebration, but now they leave the building in groups when it is time to go home as a precaution, Bakht said. "A couple of weeks down the line, things will be back to normal. But right now it's new. People are calling, leaving stupid messages," he said.

Mateen claimed allegiance to DAESH after opening fire in Pulse, a popular Orlando gay nightclub, early Sunday. The bodies of 49 people were recovered after police stormed the club and shot and killed Mateen. "We're cool people. We never had any problems. But because of what that guy did, we're ashamed," said a man in his 50s as he left the building.

"It used to be a night where everybody would celebrate. Now look, there's nobody. Only three people," he said.

In the end, several dozen people turned out for the iftar dinner, well shy of the 100 or so people who normally attend. "I think I cooked too much," Bakht said.

Not even Mateen's father, Seddique Mateen, is so forgiving. "If he hadn't done this horrible act probably I would, but right now I don't forgive him," Mateen, dressed in a coat and tie, told reporters.

"I don't know what, why he did it, but it's unforgiven to hurt their own family, we live in the United States as a family," he said. Mateen said his thoughts are with the victims, and also with his 3-year-old grandson. "He destroyed almost the whole family," he said.

Omar Mateen's wife, Noor Zahi Salman, went to the family's apartment late Monday to retrieve some belongings. In this low-rent apartment complex, brightened by the glittering sun and palm trees, few knew Mateen except by sight. "He didn't talk to anybody, to my knowledge. He was just passing," said Herbert Johnson, a resident of the Woodlawn Condominium.

Mateen's psychological state remains a mystery, as was the nature of his connection to homosexuality. Several witnesses have described him as a young man who used gay dating aps, who had made advances to another man and was a regular at Pulse.

Meanwhile, U.S. authorities on Wednesday warned that threats against Muslims would not be tolerated and will possibly be prosecuted, after the incidents in the wake of the Orlando gay club massacre, which was carried out by a Muslim gunman.

Officials asked the public to help in the investigation of Sunday's carnage at the Pulse nightclub in Orlando, which is the worst mass shooting in American history, leaving 49 people dead and 53 others wounded.

The city, reeling from the mass shooting, the murder of a singer who competed on TV reality show "The Voice" and the death of a toddler in an alligator attack at a Disney resort hotel, was bracing for the first wake for a club victim.

"Civil rights violations are a priority for the FBI," Assistant Special Agent Ron Hopper told reporters. "We will investigate reported incidents against individuals based upon any class, any protected class, to include race, religion, and sexual orientation."

"He appears to have been an angry, disturbed, unstable young man who became radicalized," said U.S. President Barack Obama, who is set to visit Orlando to show support for the tragedy-hit city.

It is not the first time that Muslims and migrants have been targeted because of their religion after an extremist attack. Many Muslims felt obliged to speak out against them and say these killings do not represent their faith, especially after DAESH's extremist attacks in Paris that killed 130 people. Similarly, after French satirical magazine Charlie Hebdo was attacked by two assailants in France on Jan. 7, 2015, which left 17 people dead, a spike was observed in Islamophobic attacks. In fact, most victims of violence by DAESH and other terrorist groups are Muslim, since they fight mostly in majority-Muslim countries and often attack other Islamic communities. The Council on American-Islamic Relations (CAIR) has condemned the Orlando attack and warned against anti-Muslim backlash.
RELATED TOPICS