Six dead, more than 40 injured after clashes between teachers, striking police in Mexico 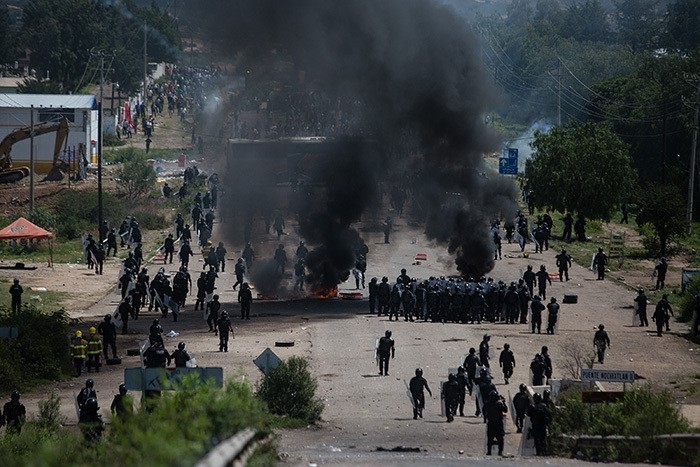 |AA Photo
by German Press Agency - DPA Jun 20, 2016 12:00 am
Six people died and more than 40 were injured in a clash between police and striking teachers in the southern Mexican state of Oaxaca on Sunday.

Shots were fired by "groups in apparent solidarity with the protesting teachers," said Governor Gabino Cue, who insisted that police did not use firearms.

Two teachers were confirmed dead while four other bodies were of young people not yet identified, Federal Police chief Enrique Galindo said.

Twenty-one policemen were wounded in the melee, three by bullets, Galindo said.

"There were civilians shooting firearms, not only at the police, but at the general population," Governor Cue said.

The clash occurred in the town of Nochixtlan, where striking teachers protesting proposed reforms had blocked the highway.

At least 500 state and federal officers were sent to break up the protest. Police arrested 21 people.

Dozens of vehicles were torched in Nochixtlan and other towns in the state.

The Federal Police authority said the officers were not armed, and denounced as "false" some images provided by the teachers' union showing agents with firearms.

"Those images are totally false, and have no correlation to the actual events. Personnel were unarmed and without truncheons," it said in an official statement.
Last Update: Jun 20, 2016 12:15 pm
RELATED TOPICS