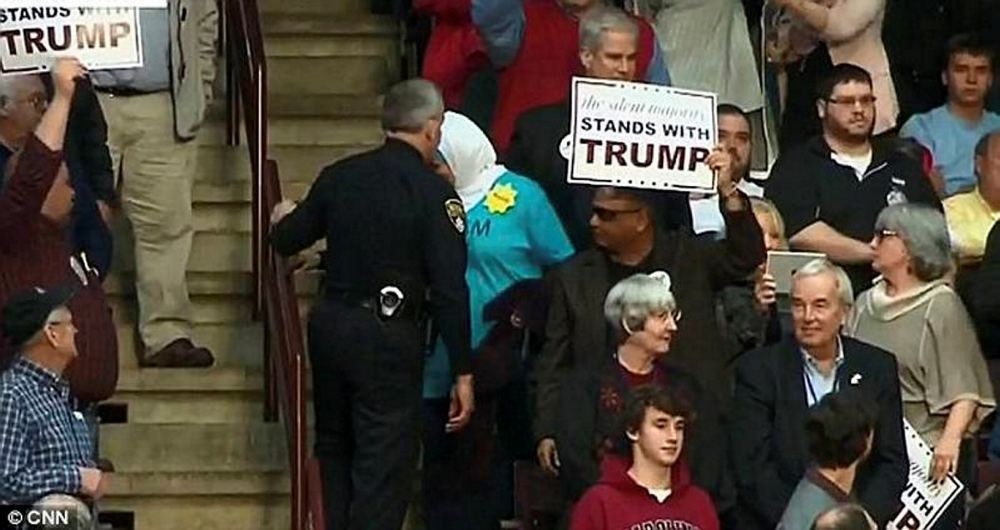 After the Orlando massacre fueled up Republican presidential candidate Trump's anti-Islam rhetoric, Muslims in America have started to say that Trump's rhetoric helps increase incidents of prejudice and hate

About three months ago, Sarah Ibrahim's son came home from his fourth-grade class at a Maryland school with a disturbing question. "Will I have time to say goodbye to you before you're deported?" he said, according to Ibrahim, a Muslim Arab American who works at a federal government agency in Maryland. "The kids in his classroom were saying: 'Who's going to leave when Trump becomes president?'" said the 35-year-old mother. The incident happened a few months after Republican presidential candidate Donald Trump, now the presumptive nominee, first called for a ban on Muslim immigrants and for more scrutiny at mosques after 14 people were killed in San Bernardino by a Muslim couple whom the FBI said had been radicalized.

Trump intensified his anti-Muslim rhetoric after last week's mass shooting in Orlando, in which a U.S.-born Muslim man killed 49 people at a gay nightclub, calling for a suspension of immigration from countries with "a proven history of terrorism". He reiterated his call for more surveillance of mosques and warned that radical Muslims were "trying to take over our children." While Democratic and several Republican leaders have distanced themselves from Trump's comments, many American Muslims say his stance has fueled an atmosphere in which some may feel they can voice prejudices or attack Muslims without fear of retribution. "What Trump did was make these hidden thoughts public. He gave people permission to speak out loud, he removed the shame associated with being prejudiced. People know that they won't be punished," Ibrahim told Reuters at a community iftar, the sundown meal during the Muslim fasting month of Ramadan. Trump's campaign did not respond to Reuters' request for comment. Trump has rejected the criticism that his rhetoric is racist, and has said he is often misunderstood by the media and his opponents.

A report by the Council on American-Islamic Relations and University of California, Berkeley released on Monday said the number of recorded incidents in which mosques were targeted jumped to 78 in 2015, the most since the body began tracking them in 2009. There were 20 and 22 such incidents in the previous two years, respectively. The incidents include verbal threats and physical attacks. Corey Saylor, CAIR's director of the department to monitor and combat Islamophobia, said there had been a spike in Islamophobic incidents in the wake of Orlando, including those targeting mosques. "Trump's rhetoric is a direct threat to American principles. He has mainstreamed anti-Constitutional ideas like banning or surveilling people based on faith," Saylor told Reuters. "Such divisive rhetoric contributes to a toxic environment in which some people take the law into their own hands and attack people of institutions they perceive as Muslim."

CAIR says the last big spike in incidents targeting mosques was seen in 2010 following the controversy over locating an Islamic center near the site of the Sept. 11 attacks in New York. It said that lent "additional weight to the argument that levels of anti-Muslim sentiment follow trends in domestic U.S. politics, not international terrorism". American rabbis and preachers have also denounced Trump's rhetoric. Anti-Semitic incidents in the United States still outstrip those against Muslims. The Anti-Defamation League said last year there were 912 anti-Semitic incidents across the United States during the 2014 calendar year, up 21 percent from 2013. "If Muslims are not free and safe in America, then Christians and Jews are not free and safe in America," said Rabbi Eric Yoffie, president emeritus of the Union for Reform Judaism. Trump has also drawn criticism for his rhetoric against Latino immigrants, saying early in his campaign that Mexican "rapists" and other criminals were coming across the border and calling for all undocumented immigrants to be deported. Manal Omar, a Muslim-American author based in Washington, said she has stopped taking the metro and walking alone late at night. "I can't dismiss the tweets and angry messages I've received from right wing militants," said Omar, who says she has grown especially vigilant after last week's murder of British lawmaker Jo Cox, whom she knew. A few days after the San Bernardino attack, Ilhaam Hassan's family restaurant was burned down in an arson attack in Grand Forks, North Dakota. Matthew Gust pleaded guilty in May to federal hate-crime and arson charges. He admitted to setting the fire because of the national origin of the employees and customers at the restaurant -- a focal point of the local Somali-American community. "I don't know what to expect if he (Trump) becomes the president," Hassan said. "He is against minorities. He is against Islam. It's not a message of unity, it's a message of dividing the country and that is not what America is based on."
RELATED TOPICS