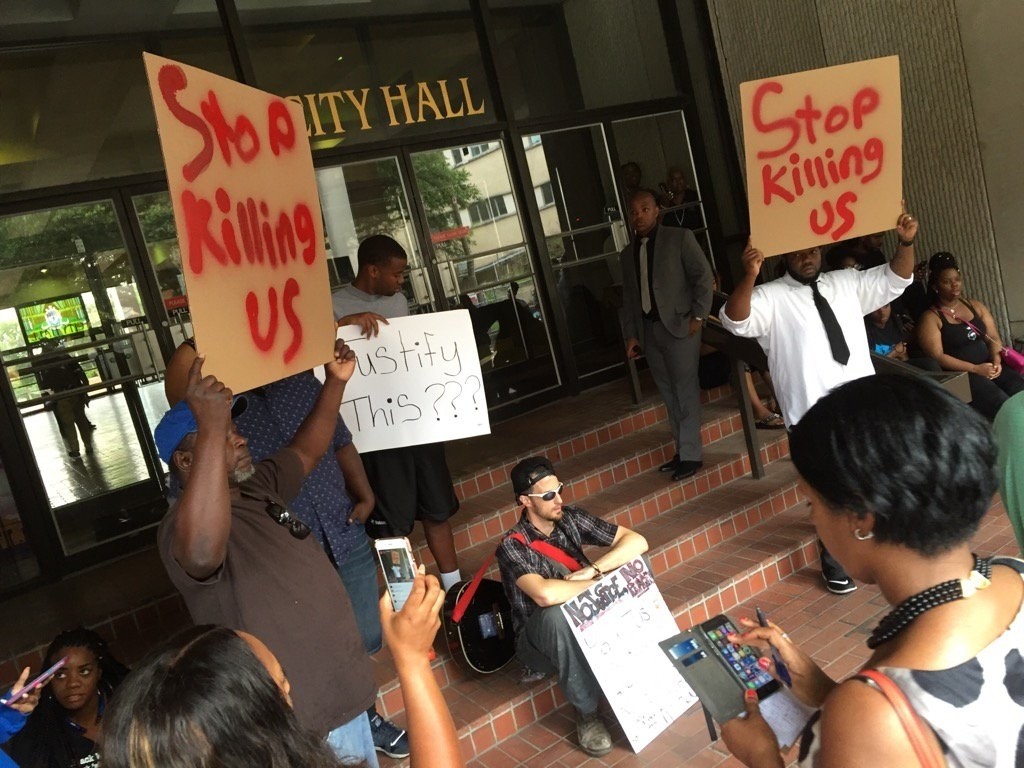 Protesters gather at City Hall in Baton Rouge over the shooting of Alton Sterling Wednesday, July 6, 2016, shortly before a press conference with local leaders. (AP Photo)
by Compiled from Wire Services Jul 06, 2016 12:00 am

The U.S. Justice Department will investigate the fatal police shooting of a black man in Baton Rouge, Louisiana, the state's governor said on Wednesday.

A video that purported to show the killing of 37-year-old Sterling had further fueled public anger about the shooting early Tuesday, prompting hundreds to protest.

About 200 protesters gathered on Wednesday chanting "hands up, don't shoot" and "black lives matter" after Alton Sterling, 37, was shot and killed during an altercation with two police officers at about 12:30 a.m. CDT on Tuesday, authorities said.

The shooting came at a time of heightened scrutiny in the United States over the use of deadly force by police against minorities.

Governor John Bel Edwards called for calm after the incident, which was caught on a bystander's video.

"I have very serious concerns. The video is disturbing, to say the least," Edwards told reporters at a news conference. He said he had spoken with the White House, the FBI, federal prosecutors and with Sterling's family, about the shooting.

"There should be no doubt in anybody's mind that this incident is going to be investigated thoroughly, impartially and professionally by the U.S. Department of Justice's Civil Rights Division," Edwards said.

The police officers, who were placed on administrative leave after the shooting, had responded to a disturbance call from someone who said a black man wearing a red shirt and selling CDs outside a convenience store had threatened him with a gun.

Several local television stations on Tuesday evening aired what they said was cell phone video of the incident. It showed an officer using a stun gun on a black man in a red shirt in a store parking lot and ordering him to get on the ground.

Two officers then tackled the man to the pavement, and one pulled a gun from his holster and pointed it at the man's chest, the video showed.

At least three gunshots were heard although the camera jerks away from the scene, followed by a woman screaming and crying, and a man asking "they shot him?"