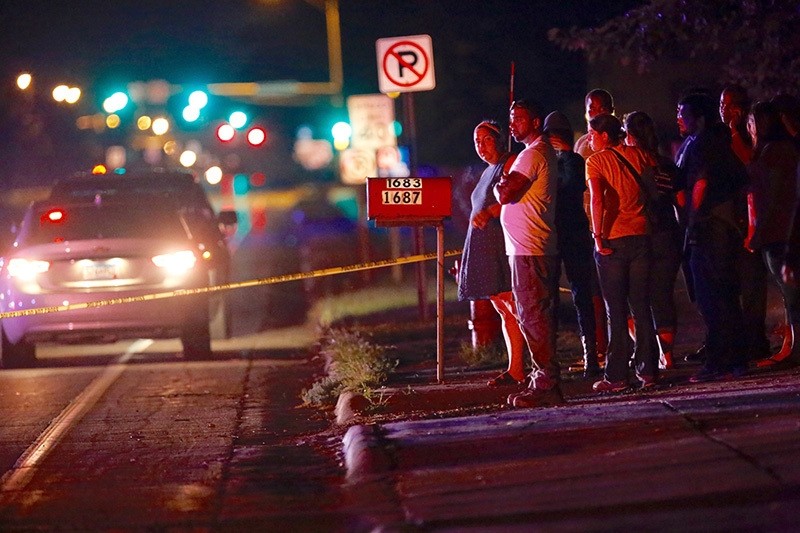 A video of the dying moments of a black man shot by police after being pulled over while driving in the U.S. state of Minnesota went viral Thursday, a day after a video emerged of a similar incident in Louisiana.

Police said the man -- identified by family and activists as school cafeteria worker Philando Castile, 32 -- died late Wednesday after being pulled over while driving in the town of Falcon Heights.

The aftermath of the attack was captured by his girlfriend on her camera phone.

Castile can be seen in the driver seat, large blood stains spreading through his white shirt. Reynolds was sitting in the front passenger seat. Her young daughter was also traveling in the car.

The shooting took place just one day after police in Louisiana shot dead a black father of five at point-blank range, in a incident being probed by federal investigators.

In the video of the Falcon Heights killing, broadcast on Facebook Live and already viewed more than 1.7 million times, Reynolds says the car was pulled over for a broken tail light. She later says there was also marijuana in the car.

Castile had a legal license to carry a firearm and was reaching for his license and vehicle registration when police shot him, she adds.

Police said the incident was being investigated and a handgun was recovered at the scene.

Castile "was trying to get out his ID and his wallet out of his pocket, and he let the officer know that he had a firearm and he was reaching for his wallet, and the officer just shot him in his arm. He just shot his arm off," Reynolds says in the video.

She says the police officer, who has not yet been identified, was "Chinese."

With Castile moaning and gasping for air, the police officer pointed his gun through the car window.

"Fuck! I told him not to reach for it! I told him to get his hands up!" the officer shouted.

For much of the nearly 10-minute video, Reynolds can be heard wailing, off and on camera, as police apparently cast her phone to the side at one point and later handcuffed her, so she could not hold the phone up.

In a poignant moment toward the end of the video, Reynolds's four-year-old daughter can be heard reassuring her deeply distraught mother.

Activists said the girl, who witnessed the incident, was just four years old.

According to the database of the U.S. daily Washington Post that keeps records of police shootings, Castile is at least the 506th person fatally shot by police so far in 2016.

The database tracked 990 shootings in 2015, and this year's shootings have already surpassed the shootings compared with the same period compared to the last year.

Castile is one of 123 black Americans shot and killed by police in 2016, of which some 10 percent of were unarmed at the time of the shooting, while about 61 percent were armed with a gun.