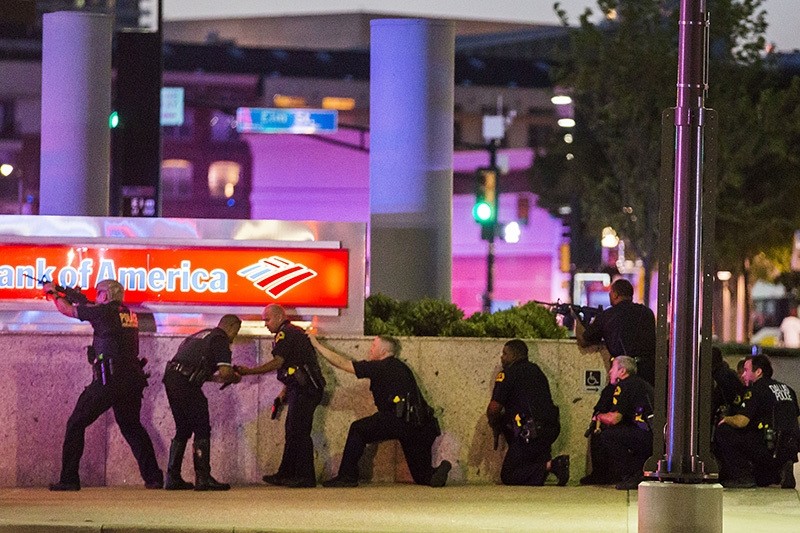 Dallas Police Chief David Brown told reporters the snipers fired "ambush style" upon the officers. Mayor Mike Rawlings said one member of the public was wounded in the gunfire.

A graphic TV footage showed how one of the shooters shot and killed a police officer from a short range with what appeared to be a shotgun.

Police later said in a statement that a suspect was is in custody and a "person of interest" had surrendered. They said a suspicious package was being secured by a bomb squad.

The gunfire broke out around 8:45 p.m. Thursday while hundreds of people were gathered to protest fatal police shootings this week in Baton Rouge, Louisiana, and suburban St. Paul, Minnesota. 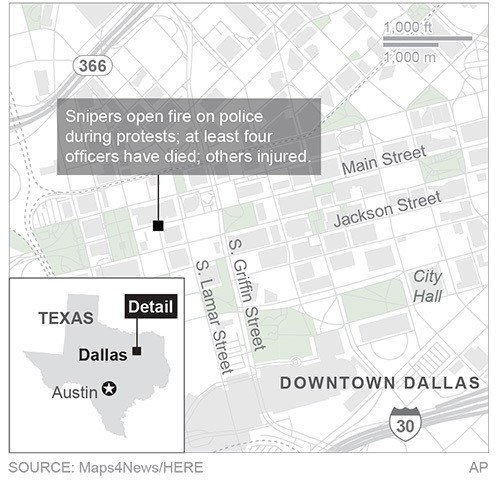 The protests in Dallas were among several across the country that were held after a Minnesota officer on Wednesday fatally shot Philando Castile while he was in a car with a woman and a child in a St. Paul suburb. The aftermath of the shooting was livestreamed in a widely shared Facebook video. A day earlier, Alton Sterling was shot in Louisiana after being pinned to the pavement by two white officers. That, too, was captured on a cellphone video.

Video footage from the scene showed that protesters were marching along a street in downtown, about half a mile from City Hall, when the shots erupted and the crowd scattered, seeking cover.

Brown said that it appeared the shooters "planned to injure and kill as many officers as they could."

Texas Gov. Greg Abbott released a statement saying he has directed the Texas Department of Public Safety director to offer "whatever assistance the City of Dallas needs at this time."

"In times like this we must remember — and emphasize — the importance of uniting as Americans," Abbott said.

The search for the shooters stretched throughout downtown, an area of hotels, restaurants, businesses and some residential apartments. The scene was chaotic, with helicopters hovering overhead and officers with automatic rifles on the street corners.

"Everyone just started running," Devante Odom, 21, told The Dallas Morning News. "We lost touch with two of our friends just trying to get out of there."

Carlos Harris, who lives downtown told the newspaper that the shooters "were strategic. It was tap tap pause. Tap tap pause."

Demonstrator Brittaney Peete told The Associated Press that she didn't hear the gunshots, but she "saw people rushing back toward me saying there was an active shooter."

Peete said she saw a woman trip and nearly get trampled.

Late Thursday, Dallas police in uniform and in plainclothes were standing behind a police line at the entrance to the emergency room at Baylor Medical Center in Dallas. It was unclear how many injured officers were taken there. The hospital spokeswoman, Julie Smith, had no immediate comment.

Other protests across the U.S. on Thursday were peaceful. In midtown Manhattan, protesters first gathered in Union Square Park where they chanted "The people united, never be divided!" and "What do we want? Justice. When do we want it? Now!" In Minnesota, where Castile was shot, hundreds of protesters marched in the rain from a vigil to the governor's official residence. Protesters also marched in Atlanta, Chicago and Philadelphia.