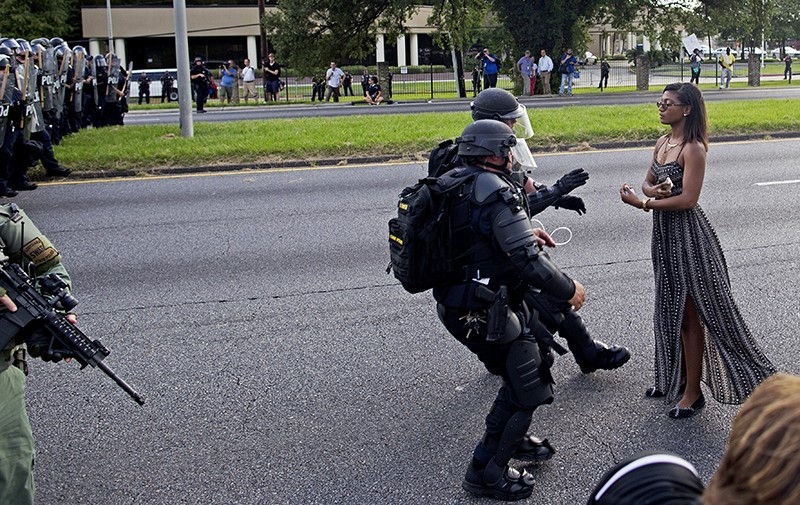 In this Saturday, July 9, 2016 file photo, A protester is grabbed by police officers in riot gear after she refused to leave the motor way in front of the the Baton Rouge Police Department Headquarters in Baton Rouge, La. (AP Photo)
by Jul 11, 2016 12:00 am

The black woman in the photograph stands in calm protest, her long dress fluttering in the breeze as two policemen clad in the heavy black padding and helmets of riot gear rush to remove her from the middle of a street in Baton Rouge, Louisiana.

Officers took about 180 people into custody over the weekend in the state capital, mostly on misdemeanor charges accusing them of blocking traffic on a major thoroughfare during protests over recent police shootings of black men.

But the standoff with one woman in particular, captured in a widely used image by Reuters freelance photographer Jonathan Bachman, has for some encapsulated the spirit of demonstrators across the United States fighting in the past week against what they decry as unjust treatment of minorities by police.

"You'll be seeing this iconic photo from #BatonRouge & versions of it, for the rest of your life," a man named David Law said on Twitter on Monday.

Friends have identified the woman in the photo as Ieshia Evans, a licensed practical nurse who lives in Pennsylvania. On a Facebook page that appeared to be hers, Evans described her actions as "the work of God."

"I am a vessel! Glory to the most high! I'm glad I'm alive and safe," she wrote.

Baton Rouge has become a flashpoint for protesters after Alton Sterling, 37, was shot and killed last week by city police who were responding to a call that he had threatened someone with a gun outside a convenience store where he was selling CDs. Sterling's death, and the fatal shooting of another black man, Philando Castile, near St. Paul, Minnesota, revived a wave of protests over police treatment of minorities that has swirled for two years and has given rise to a loose movement called Black Lives Matter.

Evans, the mother of a 5-year-old son, traveled to Baton Rouge "because she wanted to look her son in the eyes to tell him she fought for his freedom and rights," according to R. Alex Haynes, who said on Facebook he has known Evans since childhood.

A jail log from the East Baton Rouge Sheriff's Office showed an Ieshia Evans, 35, was booked on a charge of simple obstruction of a highway and had been released from custody.

Reuters could not reach Evans for comment on Monday.

After her arrest, Evans ended another Facebook post with, "Peace, love, blk power! #blacklivesmatter." She asked friends not to give interviews on her behalf, saying she wanted to tell her own story, but later said she was not ready to speak to reporters.