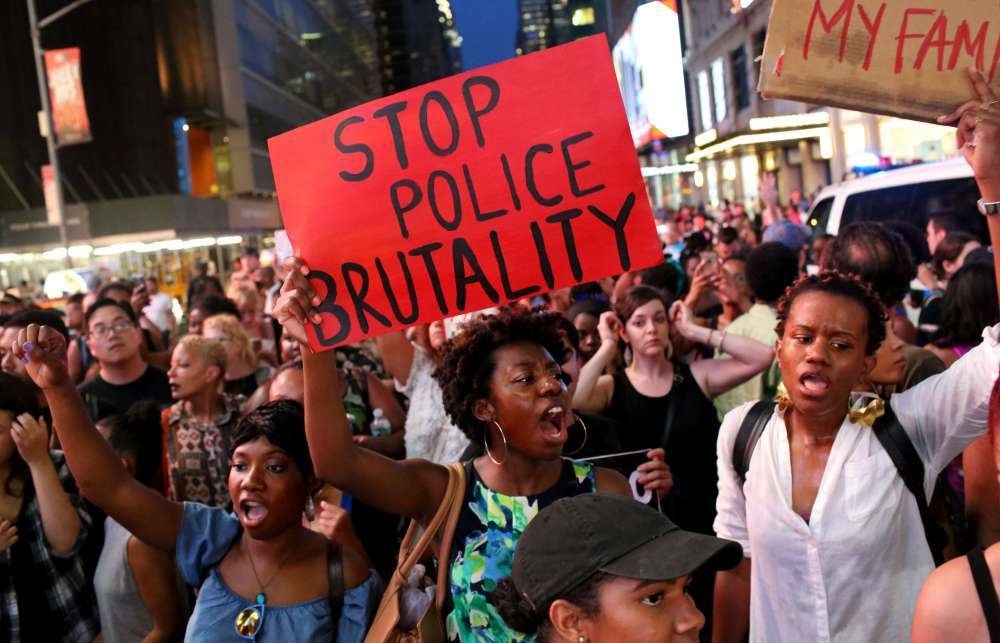 Activists protest in Times Square in New York City in response to the recent fatal shootings of two black men by police.
by Daily Sabah with Wires Jul 13, 2016 12:00 am

After nearly of a week of protests during which nearly 200 protestors were arrested in the U.S., police are taking criticism for their treatment of protestors

Criticism mounted over how Baton Rouge, Louisianna police dealt with throngs of protesters during the weekend, including nearly 200 demonstrators who were arrested and may yet face criminal charges.

Protests have spread across the country as people express outrage over the recent deaths of two black men at the hands of police in Louisiana and in Minnesota.

East Baton Rouge District Attorney Hillar C. Moore III said Monday that his office hasn't made any decisions on charges against the protesters and that it will be done on a case-by-case basis. "We're going to do as good job as we can, as quickly as we can, to try to go through the [police] reports as they come in," he said. Moore suggested that "first offenders" and people who may have just "stepped over a line" could have their cases resolved more quickly than those for protesters accused of carrying guns or injuring officers.

But with tensions rising since last week's killings of Alton Sterling in Baton Rouge and Philando Castile in Minnesota by white officers, and an attack on police by a black sniper in Dallas that killed five officers, many have questioned whether the police response has been appropriate.

Kristy Carter said she has been protesting every night since Sterling was killed. She said that officers outside the police station said they don't have a problem as long as protesters don't cross barricades or stop traffic, but that in practice it's different.

"Yesterday evening we were standing here ... and they just started coming and attacking the crowd for no reason," Carter said of police. "They are telling us not to be violent, but they are being violent against us." Jade Flint said police seemed to be getting more agitated as the Saturday evening protests went on.

"The job is to protect us while we are out here trying to protest for our rights. Not to agitate us and pick and grab people," she said.

Kira Marrero, a 22-year-old resident of New Orleans who graduated last year from Williams College in Massachusetts, was the first protester freed from Baton Rouge's jail on Sunday. She accused police of acting in an "inflammatory" manner and said an officer had pointed a rifle at her and other protesters before her arrest.

On Sunday, Amnesty International questioned the high number of arrests during Saturday's protests and whether it was a "proportionate response to peaceful protests."

Louisiana authorities have said repeatedly that they have no problem with protesters and pointed out the number of rallies that have been coordinated with authorities and have gone off without problem.

In the first few days following Sterling's death, police took a more reserved approach to enforcement, keeping a low profile as hundreds of people gathered outside the convenience store where Sterling died. Baton Rouge Police Chief Carl Dabadie Jr. said Friday that his department was striving to avoid a "military-style response" to the protests.

But Friday, tensions ratcheted up. Police have arrested 200 demonstrators over a three-day period and taken to the streets in riot gear, carrying rifles and driving armored vehicles.

Gov. John Bel Edwards said Sunday he's "very proud" of how Louisiana's law enforcement agencies responded to the protests and that he doesn't believe police officers have been overly aggressive.

During a confrontation Sunday evening near an interstate ramp, a police officer in an armored vehicle had warned protesters over a loudspeaker that they would be arrested if they didn't leave the area. Within minutes, officers in riot gear began making dozens of arrests.

Asked why some officers are armed with high-powered rifles at protests, Coppola said, "You don't really know what you're walking into. You want to have every precautionary means that you may need ... to disperse these crowds."

Meanwhile, U.S. President Barack Obama heads to Dallas on Tuesday to offer comfort to relatives of the five police officers slain in a sniper ambush, and to try to unify a nation struggling to process a raw week of deadly violence and racial tensions.

Last week, the controversial fatal police shootings of two black men, Alton Sterling in Louisiana and Philando Castile in Minnesota, prompted nationwide anger, with thousands of protesters taking to the streets from coast to coast.

The U.S. has long been witnessing numerous protests and debates surrounding race relations, police brutality, criminal justice and gun control as well as other racially charged attacks and shootings in the country. From Charleston to Orlando to Dallas, the past year has seen a torrent of slaughter motivated by hate. After the protests that took place in Ferguson, Missouri, over the death of Michael Brown, 18, who was fatally shot by a police officer in August 2014, and later in Baltimore in the wake of peaceful demonstrations over the death of Freddie Gray on April 19, 2015, questions have been raised regarding the existence of systemic injustice and racial discrimination against black people in the U.S. The massacres have also brought a measure of common revulsion, but not a common purpose, as gun control legislation has remained elusive on Capitol Hill.
RELATED TOPICS