Some Venezuelan schoolchildren going without breakfast and lunch amid economic crisis 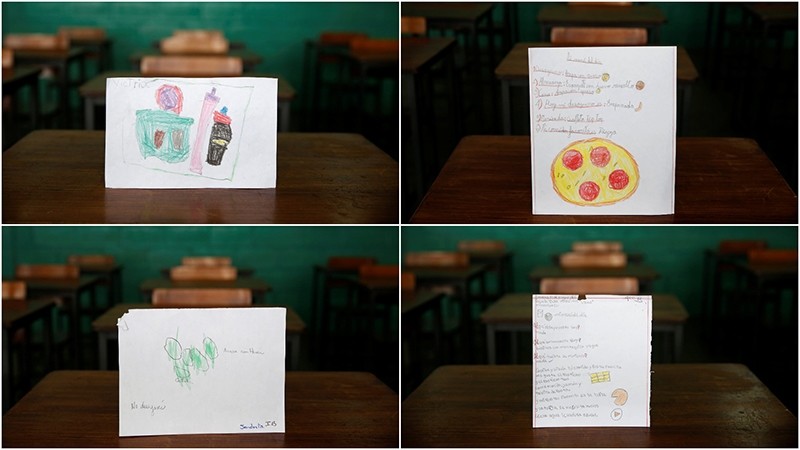 When children at a Catholic-run school in a poor neighborhood of Venezuela's Caracas capital began fainting from hunger, teachers asked them to draw or describe their most recent meals and what they expected to eat next.

The responses were shocking.

Some of the 478 kindergarten and primary students had gone without breakfast and were skipping other meals. Others expected to eat only bread, yucca or "arepa," a form of cornmeal flatbread that is a local staple.

The drawings and texts at the Padre Jose Maria Velaz school in western Caracas are another symptom of the oil-rich South American nation's deep economic crisis and its effects on nutrition and eating habits.

Due to the faltering socialist economy and the plunge in global oil prices, Venezuela has been in recession since early 2014. It suffers from the world's highest inflation and is experiencing shortages of basic goods, from milk to medicines.

Huge lines at shops and pharmacies are now the norm, and hungry residents are quickly stripping the nation's lush mango, coconut and papaya trees.

Depicting their latest meals, some students at Padre Jose Maria Velaz drew just mangoes and plantains. One said he had eaten rice and beans for breakfast, lunch and dinner.

Another said he had no breakfast. "We are waiting for food.

School director Maria Hidalgo said one in four children there were eating inadequately, and some teachers had also fainted from hunger.

"It's dramatic, what we are going through," Hidalgo said. "What kind of Venezuela are we going to have in 10 years?"

Critics say Venezuela's crisis is the fault of economic policies under President Nicolas Maduro and his predecessor, Hugo Chavez. But the government says it is the victim of an "economic war" led by opposition politicians, businessmen and the United States.

"With all the economic war, they couldn't destroy the school food program," he told state TV.

The children at Padre Jose Maria Velaz at least had a happy reprieve: Nearby private textile company Telares de Palo Grande and local charity Mi Convive recently organized a party around a healthy meat soup for all to mark the end of the school year.