Turks and Muslims in US protest July 15 coup attempt 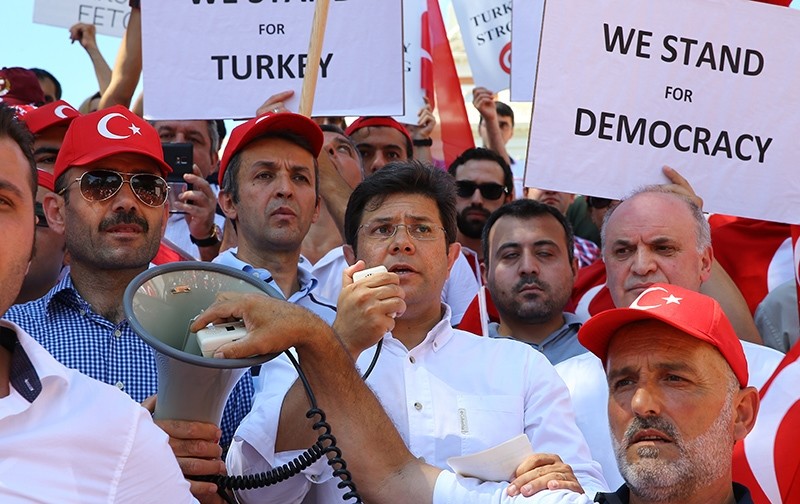 Nearly 1,000 protesters on Sunday gathered in Boston, Massachusetts, to demonstrate against a recent deadly coup attempt in Turkey.

Protesters gathered in Boston Common park to demand the U.S. extradite U.S.-based Fetullah Gülen, whom Ankara accuses of masterminding and leading the attempted overthrow of its democratically elected government.

The Turkish government recently submitted an official extradition request to the U.S.

The crowds of U.S. residents of Turkish origin from Massachusetts, Connecticut and Rhode Island, as well as Azeri nationals, Ahıska Turks, and Muslims from around the globe shouted chants and carried banners in Turkish and English that said, "We Stand with Turkey", "Obama, Extradite Gülen", and "FETO, Enough with Your Treason against the Nation", in reference to the terrorist group led by Gulen that mounted the coup attempt through rogue elements within the military.

Consul-General Ömür Budak of Turkey's Boston consulate said he was "proud" of the "unprecedented crowd" in Boston.

"United with our friends here from all walks of life, we show our support for democracy, as well as our government and our democratic institutions," Budak said.

The coup attempt caused 246 people to be martyred, injuries to 2,100 others and has resulted in the detention of more than 11,000 suspects in the past 10 days.

Similar demonstrations against the attempted overthrow have been held outside of the White House, Times Square in New York, the state of Ohio and in front of Gülen's massive compound in Pennsylvania.