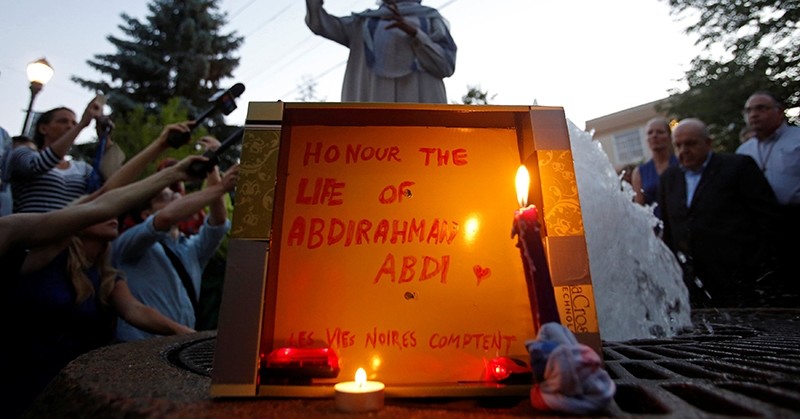 woman speaks during a vigil for Abdirahman Abdi, a Somali immigrant to Canada who died after being hospitalized in critical condition following his arrest by Canadian police, in Ottawa (Reuters Photo)
by Jul 27, 2016 12:00 am
The death of a mentally ill black man following his arrest by police in Canada's capital has sparked calls for investigators to look into whether race was a factor in the incident as advocacy groups voice concerns over police violence against minorities.

Witnesses told local media that the Somali immigrant was beaten by Ottawa police officers, and a video by a bystander uploaded to the Internet shows a man in a bloodied shirt lying face down on the ground with his hands cuffed behind his back and his pants pulled down before paramedics arrived.

While incidents of this type are rare in Canada, the death echoes similar events in the United States where allegations of police brutality and racial bias have sparked protests following a series of confrontations caught on video.

"That is a legitimate question people are asking and there will be a need to hopefully find some answers as to how or whether there was prejudice at play here," said Amira Elghawaby, spokeswoman for the National Council of Canadian Muslims.

Ontario's Special Investigations Unit (SIU) has launched an investigation into the arrest of the man, who has been identified in the media by his family as 37-year-old Abdirahman Abdi. A family spokeswoman said that he had been dead for 45 minutes before arriving at the hospital.

"It has really, really opened up feelings of deep concern and shaken confidence in people's trust of the police services, unfortunately," Elghawaby added.

Earlier on Wednesday, Baltimore's top prosecutor dropped all remaining charges against police officers tied to the death of black detainee Freddie Gray. His death led to protests and riots in April of last year.