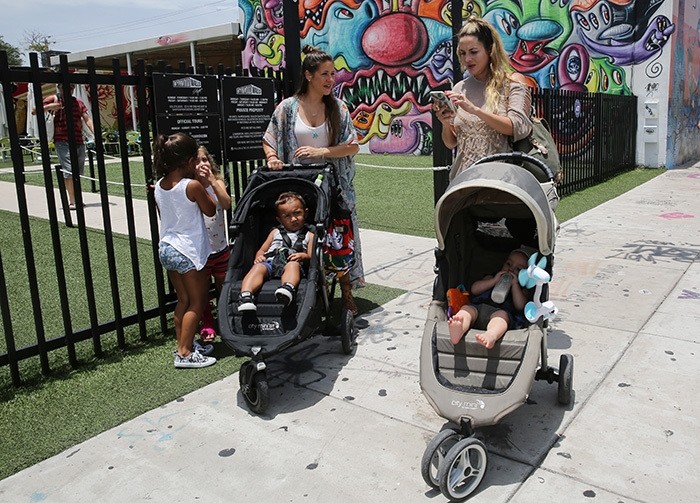 Health officials last Friday announced that mosquitoes have apparently started spreading Zika on the U.S. mainland, citing four cases they strongly believe were caused by bites. Ten more cases were announced Monday, even though Florida authorities have yet to find any mosquitoes actually carrying the virus.

Of the 14 people infected, two are women and 12 are men. Eight patients showed symptoms of Zika, which can include fever, rash, joint pain and red eyes. The others had no symptoms. The disease is often so mild that most people don't know they are infected.

All 14 cases are thought to have occurred in Miami's Wynwood arts district, a trendy, fast-gentrifying neighborhood of warehouses, art galleries, restaurants and boutiques.

Rosemary LeBranch was doing laundry in Wynwood when health officials came to her house a few days ago and took urine samples from her, her daughter and her father. Her father, Gabriel Jean, tested positive for Zika, she said Monday.

He had already spoken with a doctor and was advised to wear long shirts and pants outdoors.

"He said nothing hurts; he doesn't have any pain. He doesn't feel anything," she said.

More than 1,650 cases of Zika have been reported in U.S. states. Nearly all have been the result of travel to a Zika-stricken country or sex with someone who was infected abroad, but now more than a dozen people have been infected in the U.S.

Florida health officials said they have tested more than 200 people in Miami-Dade and Broward counties since early July. An emergency response team from the Centers for Disease Control and Prevention will help Florida authorities investigate the outbreak, collect samples and control mosquitoes.

Scott asked for a CDC emergency team to help Florida combat Zika, which has been sweeping Latin America and the Caribbean in recent months and now may be gaining a long-dreaded foothold in the U.S. The White House said a team will be sent quickly.

"We will continue to keep our residents and visitors safe utilizing constant surveillance and aggressive strategies, such as increased mosquito spraying, that have allowed our state to fight similar viruses," Florida Gov. Rick Scott said in a statement Monday.

Government health officials warned pregnant women Monday to avoid the Zika-stricken part of Miami and told couples who have been there recently to put off having children for at least two months, after the number of people feared infected through mosquito bites in the U.S. climbed to 14.

The CDC also said expectant mothers should get tested for the virus if they have visited the neighborhood since mid-June.

Jordan Davison and Melissa Felix work for a cruise line and were enjoying their day off Monday looking at Wynwood's spray-painted murals.

"It's not like a big thing, right?" the 25-year-old Davidson said. "It's kind of freaky. There's so much going on we didn't know, didn't really think about it. ... I might wear bug spray going forward."

CDC officials said they could not remember another time in the 70-year history of the disease-fighting agency when it told members of the public not to travel someplace in the U.S.

Zika infections in pregnant women can cause severe brain-related birth defects, including extremely small skulls. The global outbreak has led to more than 1,800 serious defects.

The travel warning covers an area of about one square mile in Wynwood to the east of Interstate 95 and south of I-195. It's large enough, health officials said, to provide a buffer around the suspected hot zone. The tropical mosquito that spreads Zika travels less than 200 yards in its lifetime.

Dr. Peter Hotez, a tropical medicine expert at the Baylor College of Medicine in Texas, said the CDC should be more cautious and expand the travel advisory to all of Miami-Dade County.

"If you're pregnant or think you might be pregnant, avoid travel to Miami, and possibly elsewhere in South Florida," he said. "I'm guessing most women who are pregnant are doing that. I don't think they're sitting around waiting for the CDC to split hairs and fine-tune it to a specific area."

CDC Director Dr. Tom Frieden said the narrowly drawn warning was dictated by science and not by any concern for Florida's crucial tourism industry. He said it was based on the nation's ability to contain previous outbreaks of other diseases carried by the same mosquito.

"There wouldn't be a technical or scientific basis to give a broader recommendation," Frieden said.