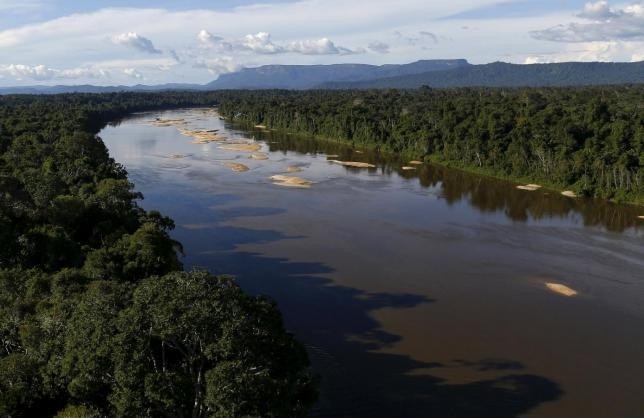 Uraricoera River is seen during Brazilu2019s environmental agency operation against illegal gold mining on indigenous land, in the heart of the Amazon rainforest, in Roraima state, Brazil April 15, 2016. (Reuters Photo)
by Aug 09, 2016 12:00 am

Wealthier countries including the United States and Australia score behind Latin America and African nations when it comes to laws protecting indigenous land rights, according to the first analysis of an online global map of land ownership.

Known as 'LandMark', the interactive platform was launched nine months ago with the aim of building an accurate, ongoing picture of indigenous or community lands using data provided by recognized organizations and experts around the world.

With 113 countries now logged into the database, the Washington-based World Resources Institute (WRI) analysed the findings so far and found countries in Latin America and Africa have the strongest laws for protecting indigenous land.

WRI research associate Katie Reytar said these developing countries scored higher than many in the developed world, including the United States, Australia, Canada and Norway, and are more progressive in protecting indigenous land and resource rights.

Studies show that indigenous people are estimated to protect more than 50 percent of the world's land surface but have formally recognised ownership of over just 10 percent.

The analysis used the data collected on 113 countries and scored them on 10 indicators on how their national or federal laws protect indigenous land and property rights. It also identified which countries were lagging behind.

The seven lowest scoring nations across all 10 indicators were in the Middle East including Iraq, Israel, Jordan, Oman, Saudi Arabia, Syria and Yemen.

Researchers said this suggests that their national laws "effectively make no attempt to address land rights".

The study also assessed which nations legally enshrine principles of 'Free, Prior and Informed Consent' (FPIC) for indigenous peoples prior to the acquisition of land by governments or outsiders.

These are incorporated in both binding and non-binding international human rights laws but the survey found the vast majority of 113 countries mapped "make limited or no attempt to incorporate FPICs".

But she said ongoing analysis next year would try to evaluate the laws in practice, to measure and compare how they were working in each country.

"The goal then will be to look at how well the laws are being implemented and the perception of security among indigenous peoples," she said.

Reytar said the project had no end date and data would be updated continually, with this monitoring helping such campaigns as one driven by the International Land Coalition and Oxfam to double the amount of land under secure tenure by 2020.