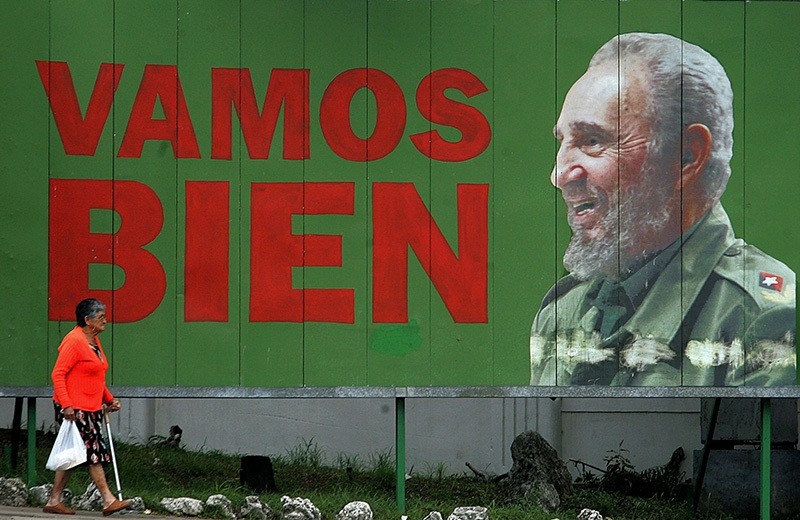 After surviving more than 600 assassination attempts, defying 10 US presidents and shaping half a century of history, Fidel Castro turns 90 on Saturday.

Here are six snapshots of this magnetic, polarizing giant of the 20th century, who has beaten the odds to hang on well into the 21st. 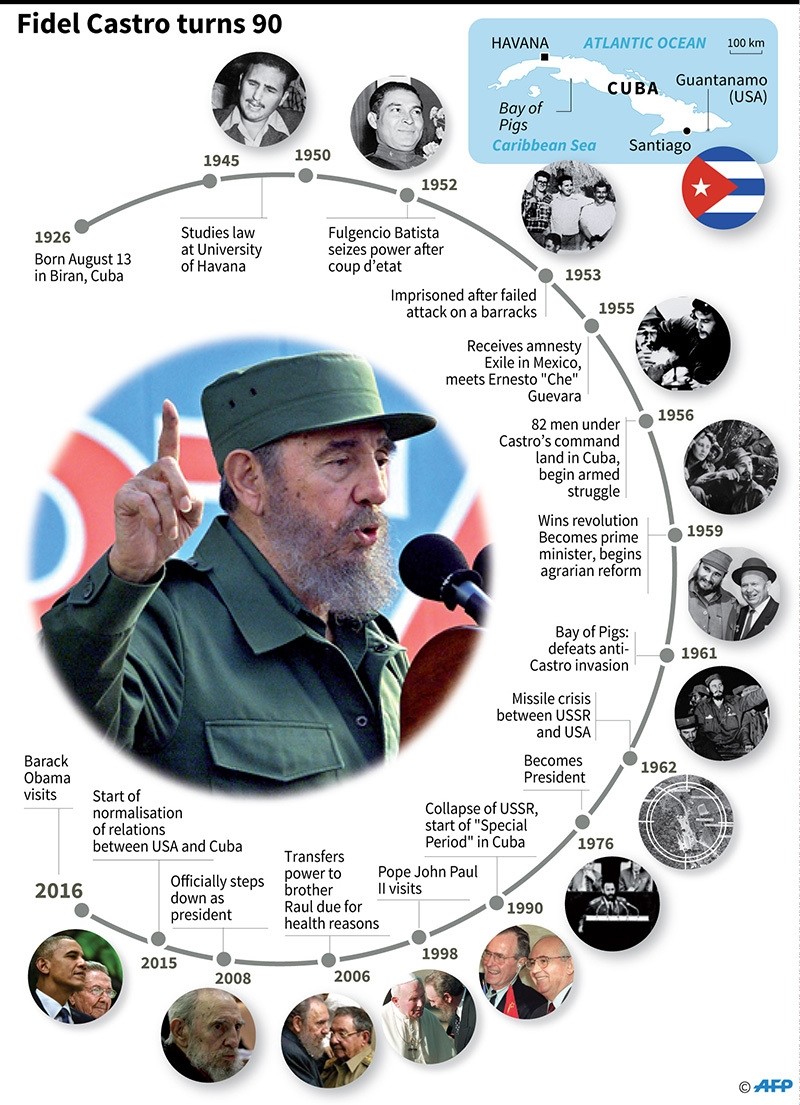 The years have left their mark on the father of the Cuban Revolution, who transferred power to his younger brother Raul 10 years ago.

His long black beard has turned a wispy gray. He has given up his iconic Cohiba cigars. He rarely appears in public.

But Fidel lives on.

No one could have predicted his place in history when he launched his revolutionary career with a botched attack on Cuba's Moncada military barracks in 1953.

The 26-year-old lawyer was captured and jailed for the failed raid, which ended with dozens of rebels killed or executed by Dictator Fulgencio Batista's forces.

Fast forward six years, and Castro was triumphantly rolling into Havana, having returned from exile to lead a guerrilla army that once numbered just 12 men to defeat Batista and his military of 80,000.

The unlikely victory brought the "red menace" of Communism to the United States' doorstep at the height of the Cold War.

But he denied reports he wore a bullet-proof vest.

"I have a moral vest. It's strong. It has always protected me," he told journalists in 1979, baring his chest to prove the point.

"I was so impressed! I could only look at his face and say, 'I love him,'" says Mercedes Gonzalez, 59, who has only seen Castro twice up close. But she says she felt an overpowering attraction.

With his rugged rebel look and imposing persona, Castro has long fascinated people, and women in particular.

"He projects a very attractive public image," says Salomon Susi, the author of a "Dictionary of Fidel Castro's Thoughts."

Officially, Castro has been married twice and fathered seven children by three women.

But he keeps his private life to himself.

"Private life, in my opinion, should not be an instrument for publicity or politics," he said in 1992.

Castro defined himself in opposition to the American "empire," and the resentment lingers to this day.

He held his tongue when his successor Raul and US President Barack Obama announced a historic rapprochement in 2014 -- his younger brother's latest move to slowly reopen the Communist island.

But after Obama visited Cuba last March, Castro lashed out, telling Cubans not to be fooled by the US president's "syrupy words."

He recalled the island's long enmity with the US, including Washington's backing for the failed invasion of Cuba at the Bay of Pigs in 1961.

His bitterness over that botched CIA plot played a part in pushing the world to the brink of nuclear war during the Cuban Missile Crisis the following year, when the Soviet Union agreed to his request to send ballistic missiles to Cuba.

You don't want to be on Castro's bad side.

He opened his half-century of iron-fisted rule in 1959 by jailing one of his own guerrilla commanders, Huber Matos, for 20 years when he criticized the new regime's turn toward Communism.

Human Rights Watch sharply criticized Castro's "highly effective machinery of repression" across the decades: basic civil and political rights were outlawed, and dissidents were jailed, tortured or forced into exile.

Hundreds of thousands of Cubans fled the island, mostly to the United States, to escape repression and poverty.

"He is the man of 'E's: egomaniacal, egotistical, egocentric," said Martha Beatriz Roque, 71, an anti-Castro dissident who was one of 75 opponents jailed in the "black spring" of 2003.

"I will remember him as a dictator."

Castro had a penchant for trying to pull off the seemingly impossible.

In 1961, he all but eradicated illiteracy with an ambitious rural education campaign.

When the exodus of Cuban exiles left the country with just 3,000 doctors, he vowed to make the island a "medical superpower." Today it has 88,000 doctors and one of the most respected health systems in the world.

Other projects were less successful.

In 1970, with Cuba's economy strangled by the US embargo, he ordered a nationwide campaign to harvest a record-shattering 10 million tons of sugar.

Despite mobilizing Cubans en masse to work the fields, the campaign failed.

Cubans are all too used to "Fidel Plans" that never quite pan out, like the ones to raise buffalo or turn Cuba into a world-class cheese producer despite a shortage of cows.

Castro was a hero to revolutionary movements and independence struggles worldwide.

He sent 386,000 troops to fight in spots where the Cold War turned hot: Angola, Ethiopia, the Congo, Algeria and Syria. And he backed leftist guerrillas across Latin America.

The military results were mixed. But the symbolism was powerful.

"He's the most important personality of the 20th century in the Western hemisphere," said Ivan Marquez, second-in-command of the Revolutionary Armed Forces of Colombia (FARC).

Castro's revolution "ignited... the desire to struggle, to take to the mountains, to grab a rifle and try to change things," Marquez told AFP.

As Castro gave his speech proclaiming the triumph of the revolution in 1959, a white dove landed on his shoulder. The man had officially become the myth.

In a country where Catholicism blends with African religions, Cubans say Castro is protected by Obatala, the most powerful of the "orisha" divinities.

Some thought him immortal, until a health crisis forced him to give up power in 2006.

Last April, however, he seemed to say goodbye.

"Soon I'll be like all the rest. Everyone's turn comes," he said.