Southern California wildfire forces over 80,000 out of homes 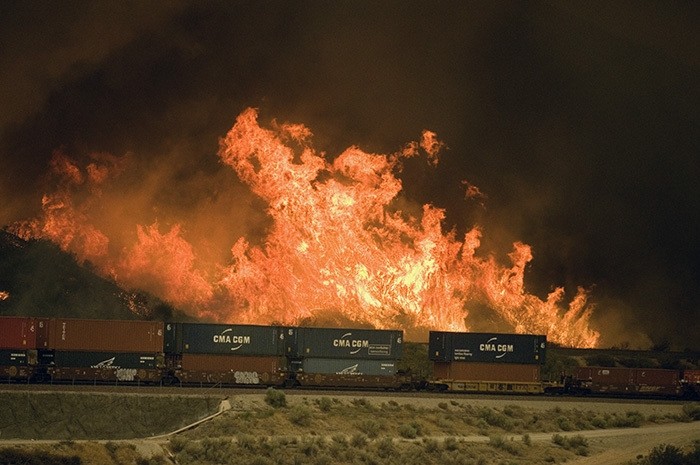 Flames erupt on a hillside alongside one of the main rail routes connecting Southern California with points north and east as a wildfire rages out of control in Cajon Pass north of Devore, Calif., Tuesday, Aug. 16, 2016. (AP Photo)
by Associated Press Aug 17, 2016 12:00 am

It tore through canyons and flew over ridges in every direction with astonishing speed, sending flames 80 feet skyward and forcing tens of thousands to flee their homes.

The Southern California wildfire that began as a small midmorning patch of flame next to Interstate 15 in the Cajon Pass had by Tuesday's end turned into a 28-square-mile monster that had burned an untold number of homes.

"This moved so fast," said Darren Dalton, 51, who along with his wife and son had to get out of his house in Wrightwood, a mountain town of 4,500 popular with skiers in winter. "It went from 'have you heard there's a fire?' to 'mandatory evacuation' before you could take it all in. This is a tight little community up here. Always in rally mode. Suddenly it's a ghost town."

Shannon Anderson of Blue Mountain Farms horse ranch in Phelan had to load up and evacuate 40 horses as the fire approached. "It's raining ash," Anderson said, breathing hard.

They were among more than 82,000 people from over 34,000 homes were under evacuation orders, said Eric Sherwin of the San Bernardino County Fire Department.

Devouring ranchlands 60 miles east of Los Angeles, the blaze surged west to the Los Angeles County line and east to the Mojave Desert in the east. The damages were likely to be vast and serious once they could be properly measured.

Sherwin confirmed Tuesday night that it had burned at least a dozen buildings, some of them homes. He said he had seen all kinds of things burn, including the Summit Inn, a historic diner near I-15, he said.

It was among several large fires burning up and down California, from Shasta County in the far north to Camp Pendleton Marine base in San Diego County. It came after several steady weeks of major fires around the state, even though the full force of fire season has yet to arrive.

But even longtime observers were surprised by the staggering speed of the Southern California fire.

It prompted Gov. Jerry Brown to declare a state of emergency in the area within hours of it breaking out, a move that more often comes after a blaze has done several days of destruction.

The fire forced a shutdown of part of Interstate 15, leaving commuters and travelers stranded for hours.

Six firefighters were briefly trapped by flames at a home where the occupants had refused to leave, forcing the crew to protect the house, fire officials said.

"We were fully engulfed in smoke," county firefighter Cody Anderson told KCBS-TV. "It was really hard just to see your hand in front of your face."

"We just hunkered down and sat there and waited for the fire to blow over," he said.

Anderson and another firefighter were treated for minor injuries.

As that fire surged, a major blaze north of San Francisco was fading, and about 4,000 people in the town of Clearlake were allowed to return home.

Their relief, however, was tempered with anger at a man who authorities believe set the blaze that wiped out several blocks of a small town over the weekend along with 16 smaller fires dating back to last summer.

Investigators in Northern California said Tuesday they had been building a case against the suspected arsonist, 40-year-old construction worker Damin Anthony Pashilk, for more than a year. But they did not have enough evidence to make an arrest until the weekend blaze ripped through Lower Lake.

The fire destroyed 175 homes and other structures in the working-class town of Lower Lake.

"What I'd do to him, you don't want to know," said Butch Cancilla, who saw his neighbor's home catch fire as he fled on Sunday. Cancilla still doesn't know the fate of his own home.

"A lot of people want to hang him high," his wife, Jennie, added.

An attorney listed as representing Pashilk did not return a call requesting comment. Pashilk is scheduled to be arraigned Wednesday.