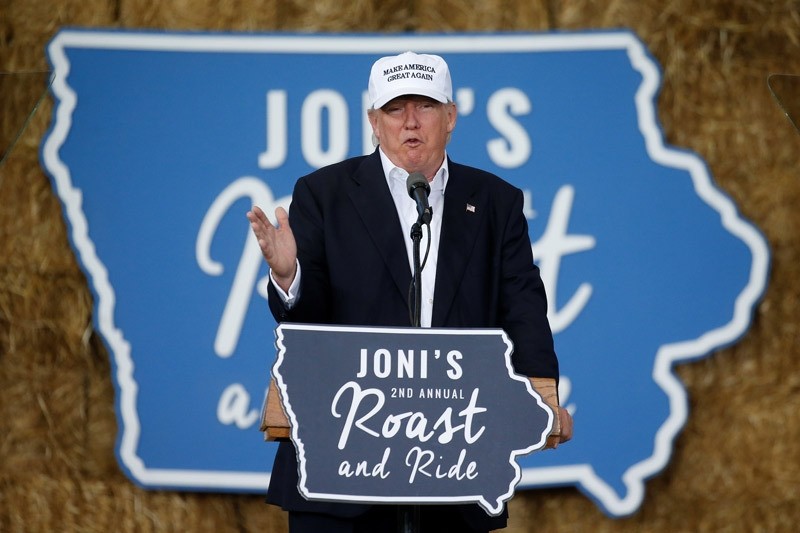 However, Trump's attempt to win African-American votes slipped up on Twitter where he was heavily criticized for appearing to insensitively use the shooting death of a prominent basketball player's cousin for his political purposes.

In response to NBA player Dwyane Wade's Tweet about his cousin, Trump wrote: "Dwyane Wade's cousin was just shot and killed walking her baby in Chicago. Just what I have been saying. African-Americans will VOTE TRUMP!"

In Iowa Trump blamed what he said were the failed policies of the Democratic Party for causing the "crushing poverty" that blacks in urban neighbourhoods endure. He also cited high murder rates, failing schools and high unemployment among black men in urban communities.

"We also have to talk about the many who are trapped [and] about the deplorable conditions in our inner cities," he said. "As a father, as a builder, as an American, it offends my sense of right and wrong to see their conditions."

The speech was a continuation of the Republican nominee's recent attempt to reach out to African-Americans. Hillary Clinton, Trump's Democratic rival in the race for the White House, holds a commanding lead in opinion polls that have surveyed blacks, who overwhelmingly vote for the Democrats.

In Iowa, Trump repeated a question he first asked last week - "What do you have to lose?" - which offended many middle class blacks for portraying their lives so negatively. But on Saturday he also mentioned the millions of blacks "who have succeeded so greatly," while focussing his message on those living in inner cities.

"To those suffering, I say vote for Donald Trump. I will fix it. It will get fixed," he said. "And I add in all sincerity, what do you have to lose?"

Trump had been criticized for repeating the question before vastly white crowds in other states. He also set off a firestorm during the week by describing Clinton as a "bigot" who only sees people of colour "as votes not as human beings worthy of a better future."

Clinton countered by accusing Trump of building his campaign on "prejudice and paranoia." She also denounced Trump's efforts to appeal to minority voters and released a campaign ad pointing to racial discrimination lawsuit filed against Trump in the '70s.

In his Iowa speech, Trump also criticized the US State Department for saying Friday that it won't release detailed daily schedules showing meetings Clinton held during her time as Secretary of State until after the November 8 election.

The Department was ordered to release the records months ago by a judge in an open records lawsuit. The records are being sought because of questions about conflicts of interest surrounding meetings Clinton held with donors to her family's charitable foundation while she served as Secretary of State.

Republicans have called for Clinton to address the apparent conflicts of interest, which they say show she ran a "pay to play" department.

Emails released Monday showed the Clinton Foundation reaching out to the State Department on behalf of donors, fuelling allegations that Clinton had used her position to personally benefit her family and its foundation.

Trump said Saturday the State Department's decision not to release her daily schedule until after the election was "protection from a corrupt, rigged system." Clinton "thinks she is above the law," he said, adding that the Clinton scandals are "exhausting our people."