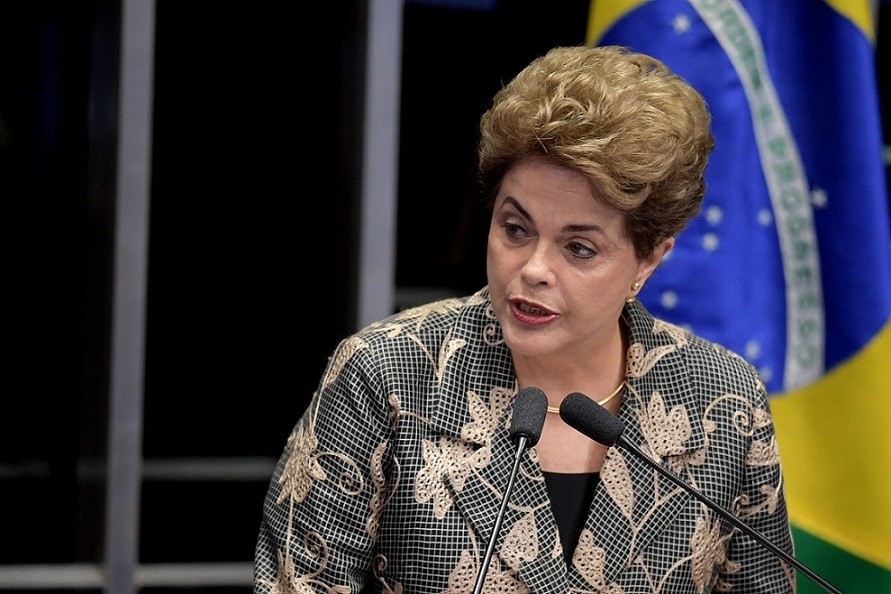 Suspended Brazilian President Dilma Rousseff delivers a speech during her testimony on the impeachment trial at National Congress in Brasilia on August 29, 2016. (AFP Photo)
by Compiled from Wire Services Aug 29, 2016 12:00 am

Brazil's suspended president Dilma Rousseff denied Monday that she had committed an impeachable crime, as she defended herself before senators preparing to vote on removing her from office.

"I did not commit the crimes that I am unjustly accused of," the 68-year-old leftist leader said in an address to the Senate, repeating her claim that the impeachment drive was a "coup."

"Vote against impeachment, vote for democracy... Do not accept a coup," the leftist leader said as she defended herself before senators who are widely expected to remove her from office.

Rousseff, Brazil's first female president, was testifying for the first time at her trial, hours before senators were to start voting on her fate.

Branding accusations against her "a pretext for a constitutional coup," Rousseff called herself a fighter for democracy.

"I've come to look your excellencies in the eye and to say that I did not commit a crime," Rousseff, 68, said in a calm, firm voice from the Senate chamber podium.

"I know I will be judged, but my conscience is clear. I did not commit a crime," Rousseff told senators at her impeachment trial.

The trial was presided over by Supreme Court Chief Justice Ricardo Lewandowski.

Rousseff reminded senators that she was re-elected in 2014 by more than 54 million voters. She said that at every moment she has followed the constitution and done what was best for the country.

"I can't help but taste the bitterness of injustice" of this process, she said.

Rousseff said that process against her was launched by Eduardo Cunha, the former speaker of the lower House of Chamber who is facing numerous changes of corruption. Rousseff said he tried to "blackmail" her into providing votes from her Workers' Party to quash an ethics inquiry into him.

Rousseff said it was "an irony of history" that she would be judged for crimes she did not commit, and by people who were accused of serious crimes.

"I ask that you be just with an honest president," she said, her voice cracking with emotion toward the end of her address.

"We are holding a judgment trial here, not a political debate," he said.

The impeachment process began late last year, when opponents in Congress presented a measure to remove her from office. Her appearance comes a day or two before the Senate votes on whether to oust her from the presidency.