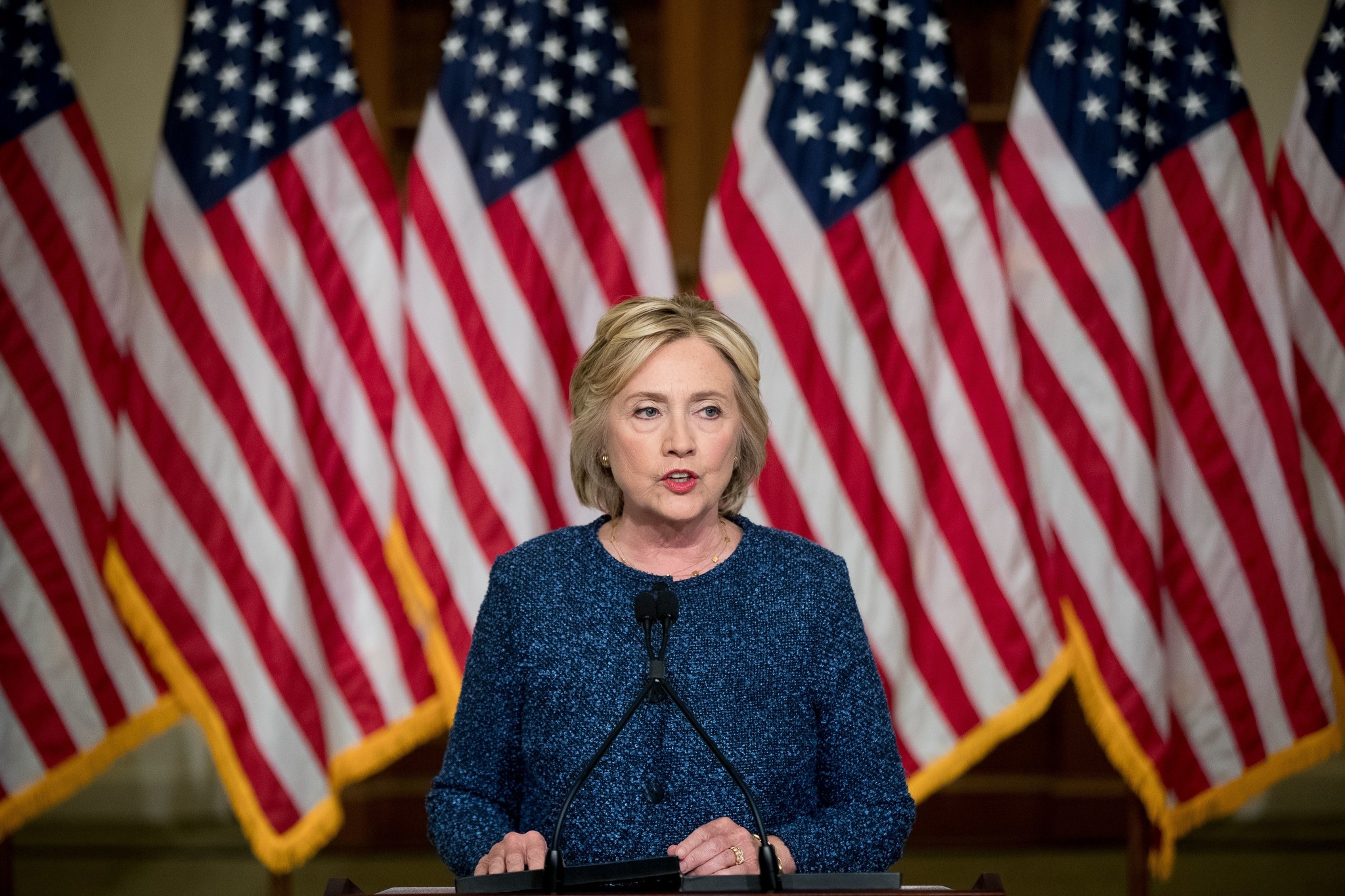 Hillary Clinton gives a statement after attending a National Security working session at the Historical Society Library, in New York, Sept. 9, 2016. (AP Photo)
by Sep 10, 2016 12:00 am

Democratic presidential hopeful Hillary Clinton said Saturday she regretted calling half the supporters of Republican rival Donald Trump racist, homophobic, sexist, xenophobic, or Islamophobic and they belonged in a "basket of deplorables".

The former secretary of state was under fire after telling a New York fundraiser on Friday night: "To be grossly generalistic, you could put half of Trump's supporters into what I call the basket of deplorables."

"The racist, sexist, homophobic, xenophobic, Islamophobic -- you name it. And unfortunately there are people like that. And he has lifted them up."

Speaking to gay rights supporters at the "LGBT for Hillary" gala, she added that those people are "irredeemable, but thankfully they are not America."

"Basket of Deplorables" quickly became a trending hashtag on Twitter. There was even a mock account called "Hillary's Basket," with the handle @TheDeplorables, deriding the former first lady and US senator.

With less than two months to go before Election Day, and the race still tight, Clinton walked back her remark on Saturday.

"Last night I was 'grossly generalistic,' and that's never a good idea. I regret saying 'half' -- that was wrong," she said in a statement released by her campaign.

But she went on to bash Trump, listing a number of "deplorable" things about her opponent.

"It's deplorable that Trump has built his campaign largely on prejudice and paranoia and given a national platform to hateful views and voices, including by retweeting fringe bigots with a few dozen followers and spreading their message to 11 million people," she said.

"It's deplorable that he's attacked a federal judge for his 'Mexican heritage,' bullied a Gold Star family because of their Muslim faith, and promoted the lie that our first black president is not a true American," she said.

"So I won't stop calling out bigotry and racist rhetoric in this campaign."

Clinton, 68, had also told the crowd at the fundraiser that other Trump supporters are people who feel let down by the government and the economy, and are "desperate for change."

She reiterated that point in her statement Saturday, saying many of Trump's supporters are "hard-working Americans" who feel marginalized.

"I'm determined to bring our country together and make our economy work for everyone, not just those at the top," she said.

Trump, 70, struck back on Twitter: "Wow, Hillary Clinton was SO INSULTING to my supporters, millions of amazing, hard working people. I think it will cost her at the Polls!"

His camp lost no time in piling on and making the most of the firestorm surrounding Clinton's gaffe.

His running mate, Mike Pence, charged into the fray.

"Hillary, they are not a basket of anything, they are Americans, and they deserve your respect," Pence said in an address to the Values Voters Summit in Washington.

"Look at the #BasketOfDeplorables in Pensacola Florida last night! What a horrible statement. #CrookedHillary," he tweeted, using one of his father's favorite insults for describing the Democrat.

During his speech Friday night in Pensacola, Trump strayed from prepared remarks to suggest that Clinton is so immune from prosecution she could get away with murder.

"She could walk into this arena right now and shoot somebody with 20,000 people watching, right smack in the middle of the heart and she wouldn't be prosecuted," he declared.

Clinton has been under continued scrutiny over her use of a private email server during her time as secretary of state.

An FBI investigation found that she sent unsecured emails with classified material through the server, but ultimately recommended that she not be prosecuted.

Trump's remark was reminiscent of a comment he made in January, when he said he could "stand in the middle of Fifth Avenue and shoot somebody" but still not lose any support.