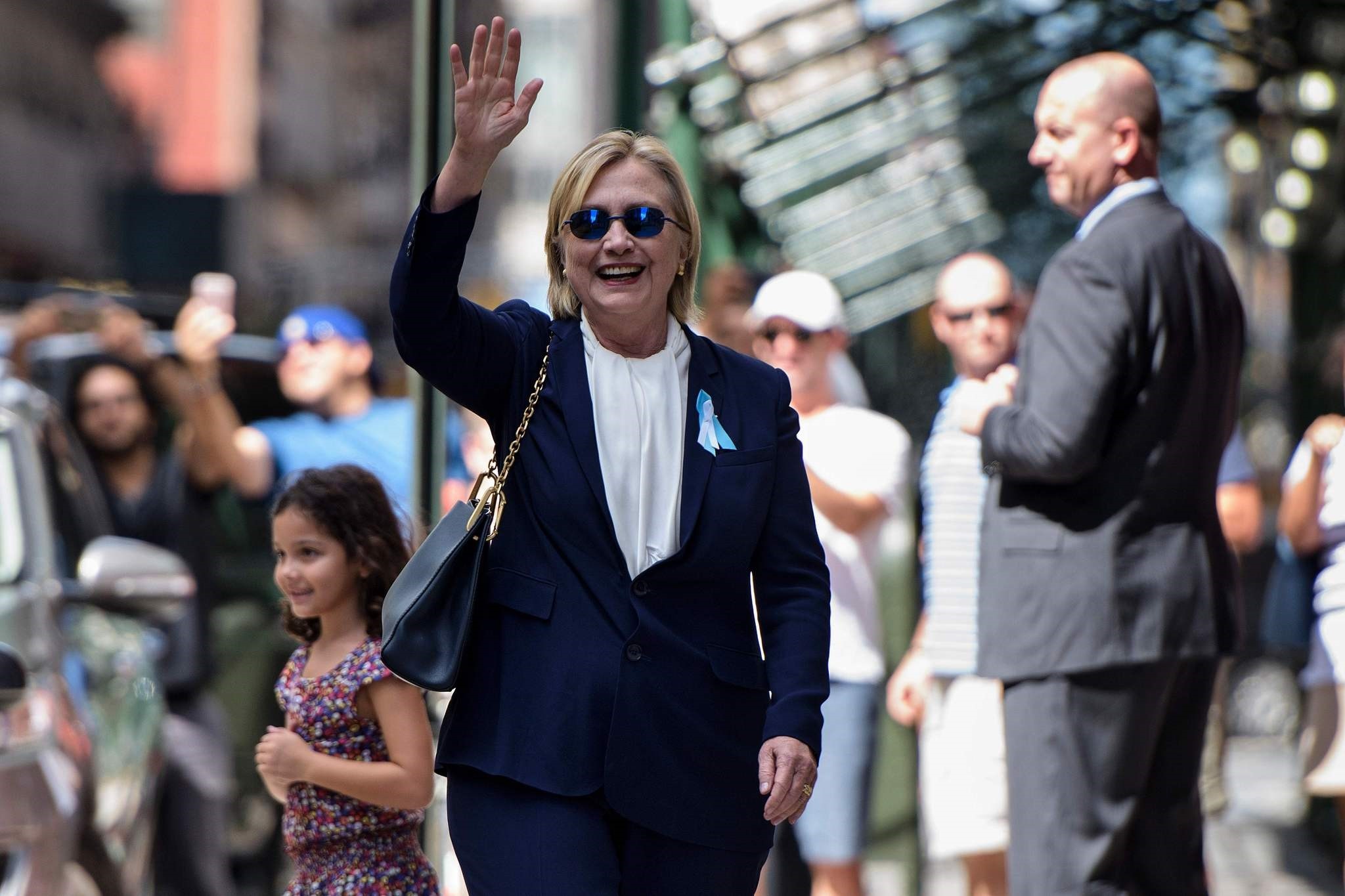 US Democratic presidential nominee Hillary Clinton waves to the press as she leaves her daughter's apartment building after resting on September 11, 2016, in New York. (AFP Photo)
by Sep 12, 2016 12:00 am

Ronald Reagan endured questions about his age and mental state and John McCain was pressured into releasing 1,000 pages of medical records. Hillary Clinton, diagnosed with pneumonia, is hardly the first White House candidate whose health is under the spotlight.

The announcement that Clinton scrapped a fundraising trip to California on Monday and Tuesday in the heat of a tightening presidential race dealt the Democrat a blow as she seeks to fend off the Republican Donald Trump - and douse swirling conspiracy theories that insist she is suffering from something far worse than treatable pneumonia.

In an election season that has often strayed from the facts, critics have used Clinton's illness to propel theories that she may be suffering from something far worse, such as a brain tumor, Parkinson's or dementia.

Some on Monday began fuelling suggestions the former secretary of state, who turns 69 next month, has even used a "body double."

Two US presidents have died in office shortly after coming down with pneumonia - both before the advent of reliable antibiotics: William Henry Harrison, in April 1841, and Warren Harding, who died in August 1923 of a cerebral hemorrhage.

But while the severity of Clinton's pneumonia is not yet clear, the vast majority of Americans who develop the respiratory infection enjoy a full recovery.

Over the past century numerous candidates have battled far worse as they ran for the world's most powerful office.

John F. Kennedy campaigned in 1960 while suffering from Addison's disease, in which the adrenal glands do not produce enough steroid hormones.

His campaign scrambled to keep that, and other Kennedy medical afflictions, secret from the public.

Franklin Roosevelt was diagnosed with polio in 1921, 12 years before he won the White House. While his illness was public knowledge, his team took great pains to prevent the press from photographing Roosevelt in a wheelchair.

Roosevelt was gravely ill during his campaign for a fourth term. The popular president won reelection, only to collapse and die five months into his new term.

Later it was revealed that surgeon Frank Lahey wrote a secret memorandum before the election stating Roosevelt was likely not healthy enough to survive through a fourth term.

More recently, during his unsuccessful bid for the Democratic nomination in 1992, Paul Tsongas assured the American people that he was cancer-free after undergoing a bone marrow transplant in 1986 for lymphoma.

That turned out to be incorrect, and Tsongas conceded that he did not provide full disclosure about his cancer.

He died from pneumonia and liver problems related to treatment for non-Hodgkin's lymphoma on January 18, 1997, just two days shy of what would have been a full presidential term if he had been elected.

Operatives for George W. Bush reportedly disseminated the theory during the 2000 Republican primaries that John McCain's time as a prisoner of war in Vietnam had left him mentally unbalanced.

Eight years later during his second presidential bid, and amid concern over his battle with skin cancer, McCain released more than 1,000 pages of medical records, raising the bar for candidates revealing health details.

Health scares have afflicted several presidents in office, as well.

In January 1992 George H.W. Bush vomited on Japan's prime minister and then fainted during a banquet, but the incident was treated more as a source of comedic material than as a broader health worry.

His son, President George W. Bush, choked on a pretzel and briefly fainted in 2002 as he watched television.

President Reagan had polyps removed from his colon in 1985, than underwent surgery for prostate cancer in 1987.

Amid mounting concern about his health and age, Reagan, then 73, turned the issue to his advantage during his 1984 reelection campaign when asked about it during his debate with 56-year-old Democrat Walter Mondale.

"I will not make age an issue of this campaign," a steely Reagan vowed. "I am not going to exploit for political purposes my opponent's youth and inexperience."

Reagan won reelection in a landslide.