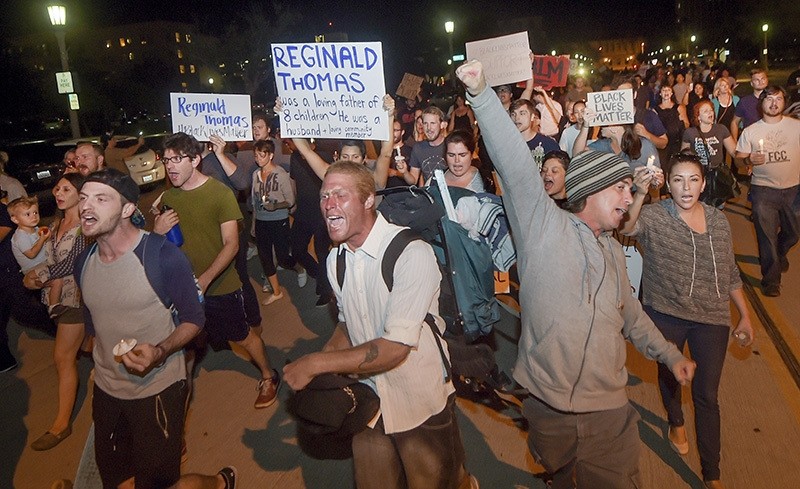 Protesters rally to the Pasadena City Hall in a candlelight vigil for Reginald Thomas who died in Pasadena Police custody in Pasadena, Calif., on Friday, Sept. 30, 2016. (AP Photo)
by Associated Press Oct 01, 2016 12:00 am

A man armed with a knife and reported to be bipolar died after a struggle with Pasadena police officers who were called to an apartment following reports of a disturbance.

Pasadena police Chief Phillip Sanchez said a fight ensued early Friday after the officers used a Taser on the man when he ignored their orders to drop the knife.

After he was subdued, officers noticed he wasn't breathing and attempted to revive him, Sanchez said in a statement. Paramedics also tried but failed, and the man was pronounced dead at his apartment in a modest Pasadena neighborhood.

Police did not reveal the man's name but several family members identified him as Reginald Thomas, a father of eight children.

Several added that while Thomas had a long history of mental illness that included previous run-ins with police, he was not a violent person.

Some said they suspected police overreacted because Thomas was black. They noted the recent shootings of black men by officers around the country, although they acknowledged a gun had not been used in this instance.

"He was struggling with mental illness but the police know this," said Thomas' brother-in-law, Forrest Elder. "He's been in and out of mental homes where they help him and give him medication.

"But he wasn't treated as a patient or a victim," Elder continued. "He was treated as a suspect, and that's how they treat us."

On Friday night, about 100 people marched from the apartment complex through the streets of Pasadena to the police department to protest Thomas' death. Many carried candles or lighters or lit up their phones.

The group blocked roads and intersections but was otherwise very peaceful.

Thomas' wife, Shainie Lindsay, told KTLA-TV that her husband himself called police to their apartment about 2:30 a.m. Friday when he realized he needed help.

"They came. Two polices came on the scene with a flashlight. They asked him. They said, 'Mr. Thomas, drop the knife and the fire extinguisher.' He was not responding because he was not — he was just out of it basically," said Lindsay, who added she is the mother of four of Thomas' eight children and is six months pregnant with another.

Elder said the children range in age from about 1 to 11. Elijah Floyd, who lives in an apartment just across a walkway from Thomas' apartment, called him a doting, stay-at-home father who never caused neighbors any trouble.

"I know you're angry. I do. I get it. But it's going to take time," Katz told one friend of Thomas, Jasmine Abdullah, wearing a Black Lives Matter T-shirt and shouting angrily at police officers that they had murdered her lifelong friend.

"He was a good father. He had eight children. About to have nine. And when people aren't well and call for help they're supposed to get help. Not die," she said.

Although she and a handful of others were visibly angry, most in the crowd remained calm. Some spoke politely with police as six to eight uniformed officers stood guard at the complex's locked front gate, controlling who passed in and out.