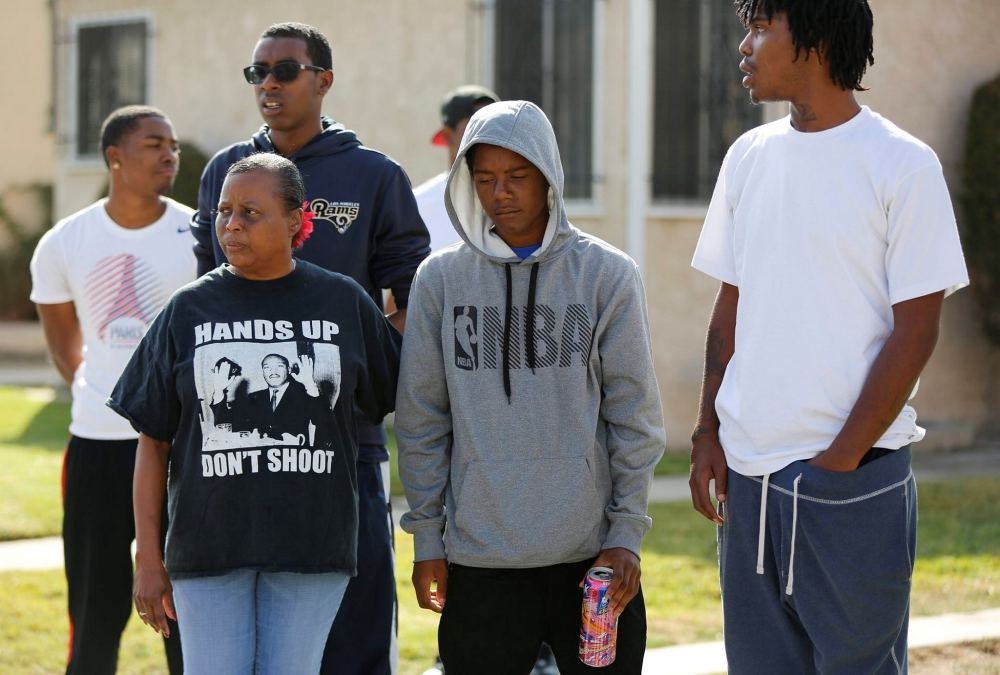 After a fatal shooting in L.A., neighbors and members of the community gather around a makeshift memorial on Oct. 2.
by Daily Sabah with Wires Oct 04, 2016 12:00 am
After another black man was fatally shot by police during a pursuit in South Los Angeles on Saturday, the death toll of black Americans killed by U.S. police has mounted to 218 so far this year, according to reports from Mapping Police Violence. The report also points out that black Americans are three times more likely to be killed by police than white Americans, revealing U.S. police violence against black people in the country.

Carnell Snell, 18, was killed by an officer after bailing out of a car, according to the Los Angeles Times. He then fled on foot until police caught up with him in what relatives said was the back yard of his home. Details of the shooting behind that house remain a mystery. Officials have not disclosed their account of the events, but the Los Angeles Police Department (LAPD) said a handgun was recovered at the scene. Police initially attempted to pull over the vehicle Snell was in because it bared paper plates and officers suspected it might have been stolen. Snell did not comply at that time and the occupant fled on foot prompting the pursuit, the LAPD said in a statement. Snell's death drew dozens of people onto the streets of South Los Angeles and nearby Hancock Park on Saturday evening. The LAPD said on Twitter the South Los Angeles protesters were "vocal, but peaceful."

Snell's death marks the third of black men in confrontations with police in Southern California in the past week.

Alfred Olango was fatally shot in a San Diego suburb Tuesday. Police say he took a shooting stance after they arrived at the scene, prompting officers to open fire. He was holding an electronic cigarette device. The videos show the officer fired four times at close range almost immediately after Olango, 38, suddenly raised both hands to chest level and took what was described as a shooting stance. In addition to the videos, police showed the 4-inch electronic cigarette device Olango had in his hands when he was shot.

The deaths of black men at the hands of police have sparked protests across the U.S., most recently last week in the North Carolina city of Charlotte. The demonstration is the latest sparked by a series of fatal shootings of black men by police in Tulsa, Oklahoma, and Charlotte, North Carolina. Charlotte and Mecklenburg County were placed into a state of emergency after protests turned violent over the fatal shooting. The shooting led to two nights of violent protests, including unrest hours after the shooting on Sept. 20 and more violence in downtown Charlotte continued into the next night. The city lifted the curfew, which had been imposed on Sept. 22, on Sept. 29.
RELATED TOPICS