No forgiveness in Colombia as reconciliation process rejected 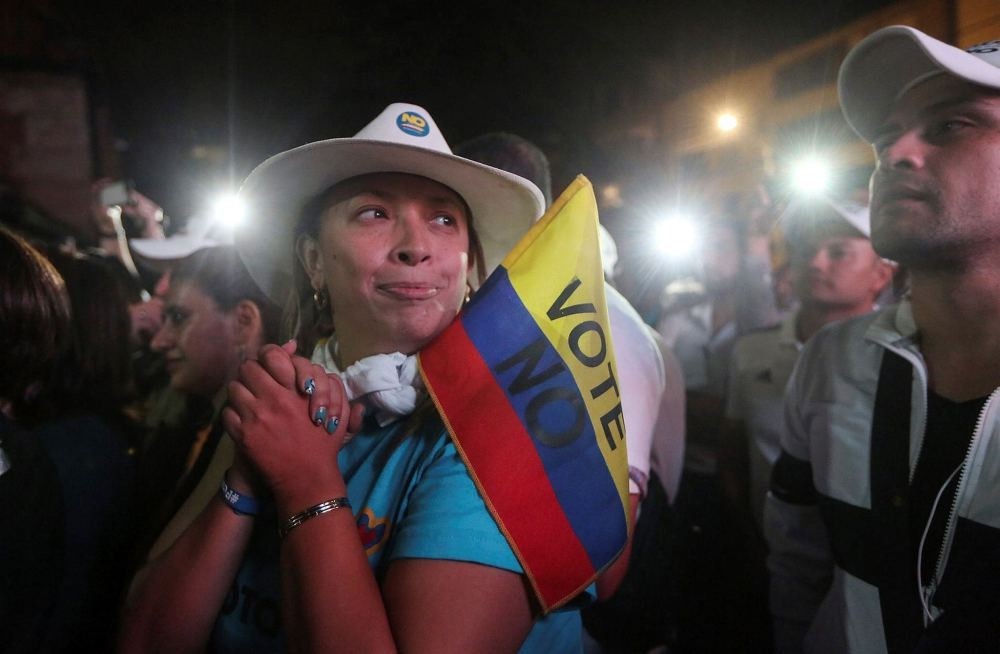 Colombian voters surprised everyone by voting "No" to Sunday's referendum on a peace deal with the FARC rebels. The "No" side won by a tiny margin- 50.25 percent to 49.75 percent. After a half-century of civil war that has deeply injured Colombians, Colombians rejected to vote for peace despite the four years of the reconciliation process. The "No" vote poured cold water on those who believe the long-forgotten peace could finally arrive in the country after 52 years of war. However, Sunday's referendum showed that the peace deal rests solely on Colombian voters' ability to forgive.

"There is a couple of reasons for the 'No' vote. The first one is that regions mostly affected by the conflict voted 'yes.' However, the 'no' vote lea by a small margin signals politically motivated voting. Secondly, the turnout remained very low due to the lethargy of those who voted 'yes.' Besides, all of those who voted either 'yes' or 'no' want peace. Those who voted yes wanted to give a chance to peace, and those who voted 'no' say 'we did not say no to peace, but to the [peace talks] itself," an international relations expert, Mehmet Özkan said. "The process is not yet over, [the no vote] does not mean a return to conflict" he added.

Pre-election surveys predicted that "yes" would win by a large margin; according to Datexco, 67 percent of the 2,000 voters said they will take part in the referendum. Ipsos said 66 percent of those who were polled said they will vote "yes." The war in Colombia killed about 220,000 people and was marked by kidnappings, massacres and rapes that prompted five million Colombians to flee their homes.

The incidents of violence were reported on the day of the peace referendum. The FARC's dissidents reportedly attacked a polling station in Central Colombia. "There was an attack in which they launched an explosive artifact that fell far from the polling station," Colombian Defense Minister Luis Carlos Villegas told press, as reported by Colombia Reports. The Colombian army carried out a counter offensive after the attack. The First Front, the unit of the FARC that has openly rejected to take part in the peace process, carried out attacks.

The reconciliation process between President Juan Manuel Santos government and the FARC rebels have engaged in peace talks in Cuba since 2012. Santos' government and FARC announced an agreement to create a new peace tribunal to try those responsible for gross human rights abuses committed during the armed conflict in September 2015. However, abuses and violence has not stopped. Civilians in Colombia have continued to suffer serious abuses perpetrated by rebels. According to the Human Rights Watch, FARC guerrillas engaged in serious abuses, including killings, forced displacement, and threats against civilians in the municipality of Tumaco in 2015.

Who are FARC rebels?

The FARC is the oldest and largest group among Colombia's left-wing rebels and is one of the world's richest guerrilla armies. The group was founded in 1964, when it declared its intention to overthrow the government and install a Marxist regime. According to the Colombian security forces, there are around 7,000 active militants within the guerilla group. It is estimated that more than 8,500 civilians have given support to the group. However, the number went down gradually, as the number of active militants in 2002 was 20,000. The group was accused by human rights groups of forcibly recruiting women and children, especially those under the age of 15. Their main target is the Colombian security forces as they have attacked police stations and military posts. As part of the reconciliation process, FARC rebels are set to begin disarming and demobilizing, the group reportedly surrendered a list of the 5,765 guerrillas to the Colombian military.
RELATED TOPICS